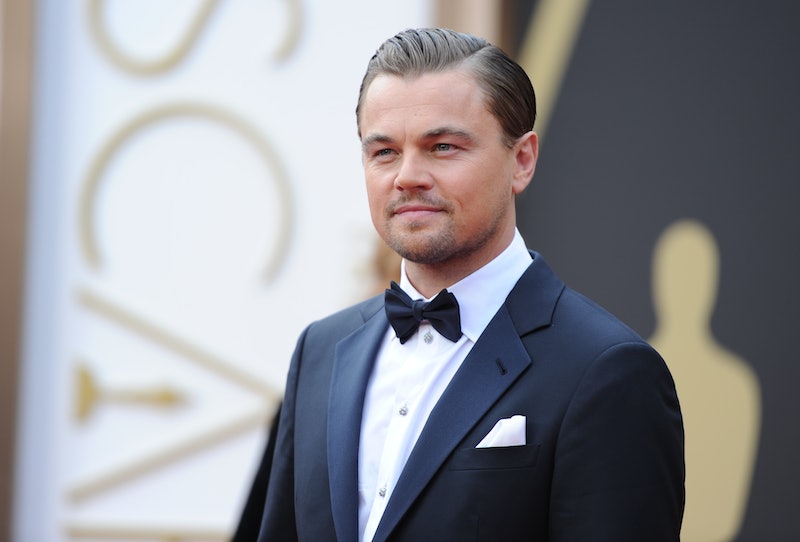 In the midst of a potential Rihanna relationship, it's been announced that Leonardo DiCaprio is slated to play a man with 24 personalities in his upcoming film The Crowded Room, possibly his most Oscar-bait-y role yet. Seriously, a true story about an eccentric man (Billy Milligan, who successfully used multiple personality disorder as a defense in court) is right up DiCaprio's alley. I mean, it's a perfect excuse to show off his impressive spectrum of characters. The thing is, to date, DiCaprio has played give or take 25 different personalities... and hasn't won an Oscar for any of them.

I saw this with no ill will to DiCaprio. Just sadness. He is undoubtably one of the most talented men in Hollywood, and proves time and time again that he really is deserving of Academy recognition. But, as the years go on, his thirst for that golden trophy grows deeper, and the DiCaprio Oscar memes get more and more hilarious. This latest attempt is especially amusing, but I'm still rooting for him. Who knows, maybe the 26th time is the charm?

In any case, let's recap all the astonishing personalities DiCaprio has embodied over the years... and then not won an Oscar for.

In DiCaprio's film debut, he plays Josh, a young boy that is pursued by the fearsome alien Crites. By virtue of this being Critters 3, DiCaprio most certainly did not win an Oscar.

2. Toby Wolff from This Boys Life

Here DiCaprio played Toby Wolff, a teenager struggling to move out from under the thumb of his domineering stepfather. Just like how Leo struggles all the time to win an Oscar. He did not win an Oscar for this.

DiCaprio earned an Oscar nomination for playing Arnie, the adorable, mentally disabled brother of Johnny Depp's titular Gilbert Grape. It was the first time he really COULD'VE won an Oscar, but spoiler alert: he didn't.

4. Fee "The Kid" Herod from The Quick and the Dead

He was a quick shooter, but he didn't get DiCaprio an Oscar.

5. Jim Carroll from The Basketball Diaries

DiCaprio did a riveting portrayal of writer Carroll, convincingly nailing his days as a troubled young heroin addict. Riveting as it was, it didn't get him an Oscar either.

DiCaprio as a brilliant French poet. Who wouldn't love that? The Academy, that's who.

Baz Luhrmann's modern take on the Shakespearean classic cast DiCaprio as a swoonworthy Romeo. Swoonworthy as he may be, though, an Oscar was not won.

He's a pretty arsonist, and, at the end of the movie, does not win an Oscar.

Perhaps his most iconic role in possibly the biggest movie of the 20th century. Titanic ultimately won 11 Academy Awards, you go Titanic!

And none for Leo DiCaprio, bye.

10. Philippe from The Man in the Iron Mask

DiCaprio, clad in ornate period costuming, played a starring role in this Three Musketeers film, and still managed to not win an Oscar.

In this film, DiCaprio played a celebrity, showing off his impressive range. No Oscars were to be had.

12. Richard from The Beach

A reckless adventurer and world traveler who doesn't win an Oscar.

It's legit DiCaprio and BFF Tobey Maguire being obnoxious at a diner. Not Oscar-worthy.

14. Frank Abagnale, Jr. from Catch Me If You Can

While DiCaprio's co-stars Christopher Walken and Tom Hanks got Oscar noms, DiCaprio's role as a suave con man got no love from the Academy.

The first time DiCaprio collaborated with Martin Scorsese, and also the first time their joint efforts didn't get DiCaprio an Oscar.

16. Howard Hughes from The Aviator

DiCaprio ALMOST got an Oscar for his role of eccentric genius Hughes, but then he didn't.

17. Billy Costigan from The Departed

A stunning performance by DiCaprio, who plays an undercover cop trying to investigate the Irish mob. Scorsese won an Oscar, but DiCaprio? Not so much.

Jack and Rose are reunited, only to continue not winning Oscars.

Craziness ensues, Oscars do not ensue.

You're not dreaming. DiCaprio didn't get an Oscar for this.

With all those prosthetics DiCaprio used to embody former FBI director Hoover, it's no wonder he didn't win an Oscar.

This magnificent bastard cut up his hand while filming, and STILL STAYED IN CHARACTER, and then STILL DIDN'T GET AN OSCAR.

24. Jay Gatsby from The Great Gatsby

Sorry, old sport. No Oscars for DiCaprio's portrayal of the famous literary character.

25. Jordan Belfort in The Wolf of Wall Street

In DiCaprio's most recent nomination for an Oscar, he did not win an Oscar. I know, I know. Shocking.

More like this
How Andrea Riseborough Got Nominated — & Almost Disqualified For An Oscar
By Jake Viswanath
12 Years Ago, Austin Butler Manifested His Oscar Nom In This Disney Movie Scene
By Jake Viswanath
Yes, You Can Stream ‘To Leslie’ In The UK Now
By Sam Ramsden
Paul Mescal’s Family Celebrated His Oscar Nomination In The Sweetest Way
By El Hunt
Get Even More From Bustle — Sign Up For The Newsletter
From hair trends to relationship advice, our daily newsletter has everything you need to sound like a person who’s on TikTok, even if you aren’t.