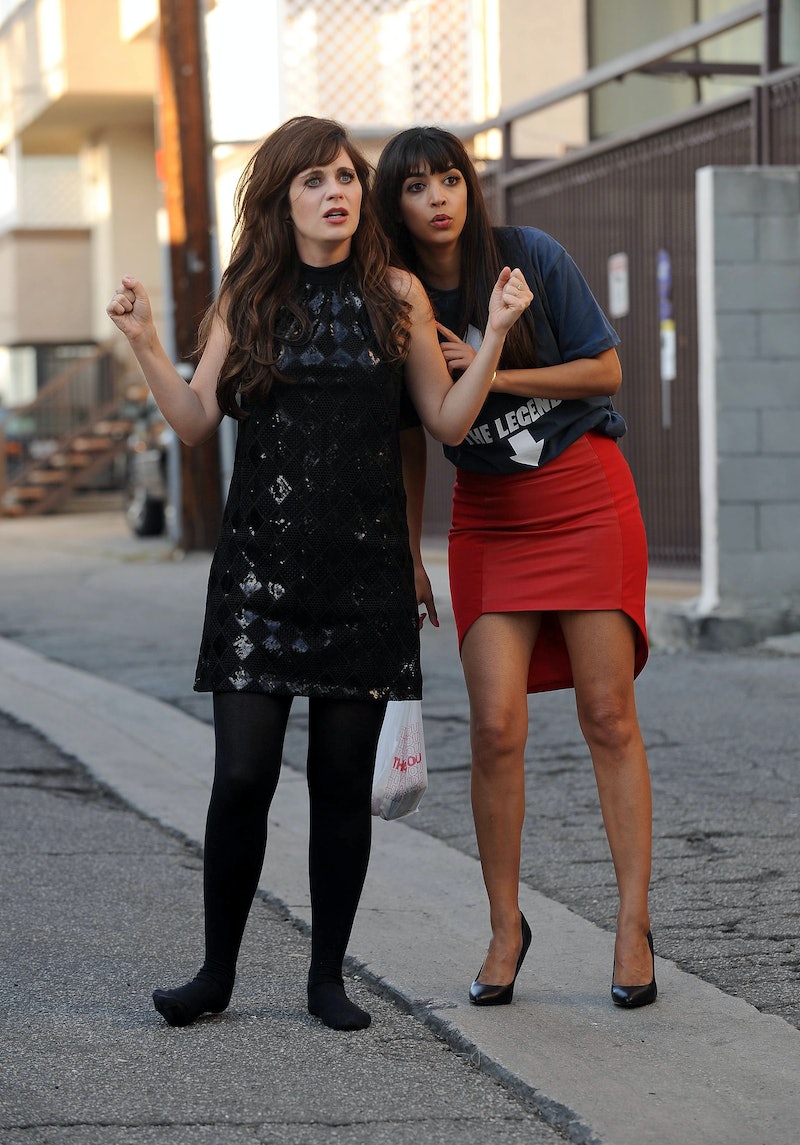 Running into your ex is always awkward. Running into two (sorta) exes, however, is downright comedic gold — a fact that was more than proven during Tuesday night’s New Girl episode “Walk of Shame,” which found Jess and Cece doing just that… the iconic walk of shame. But let’s back up a minute here. After a wild night of partying, Jess woke up in bed with Bearclaw, played by her Season 2 suitor, Josh Gad. (I hear he likes warm hugs.) Don't worry, they didn't sleep together, but instead created what could possibly be the best musical ever created. I'd go see it. Just saying.

But just in case that unexpected reunion wasn’t enough, during their rather challenging walk home, these ladies also stumble upon none other than Jess' Season 1 boyfriend, Paul Genzlinger, played by Justin Long. Yup, that’s two blasts from the past in the span of 24 hours. Welcome to my worst nightmare. Was it somewhat uncomfortable? Of course it was. But that type of scenario is a big part of what makes this series thrive.

I personally love when a show brings back old characters for a visit, even if it’s only temporary, and this most certainly was no exception. As for what these guys have been up to since we last saw them, well, Bearclaw has pretty much changed in no way, while poor Paul has been spending his days as a party clown for kids birthdays. (Scratch what I said before, folks, because that is my worst nightmare.)

But the No. 1 thing that made this episode a standout experience was that it highlighted the fact that Jess is now once again living the single life. Sure, some may think that the walk of shame is degrading, especially after a certain age, but Jess, Cece, and eventually Paul decide to take back the morning and wear that shame with pride. Suffice to say, Jess’ comedy is clearly at her best when she’s flying solo.

That said, the only other thing that could’ve made this episode even better was if the writers had granted us with a Jess and Nick hook-up. But alas, it was not meant to be just yet. But until that time (hopefully) comes, embrace that glorious freedom, ladies. You do you.

More like this
“The Door Is Always Open” For Another 'Breaking Bad' Spin-Off, Says AMC Boss
By El Hunt
Emma Thompson, Lashana Lynch, & Stephen Graham Lead Netflix’s 'Matilda'
By Sophie McEvoy
Emilia Clarke Shares More Details About The New 'Game Of Thrones' Series
By Maxine Harrison
All The Marvel Easter Eggs You May Have Missed In ‘Ms. Marvel’ So Far
By Kadin Burnett
Get Even More From Bustle — Sign Up For The Newsletter