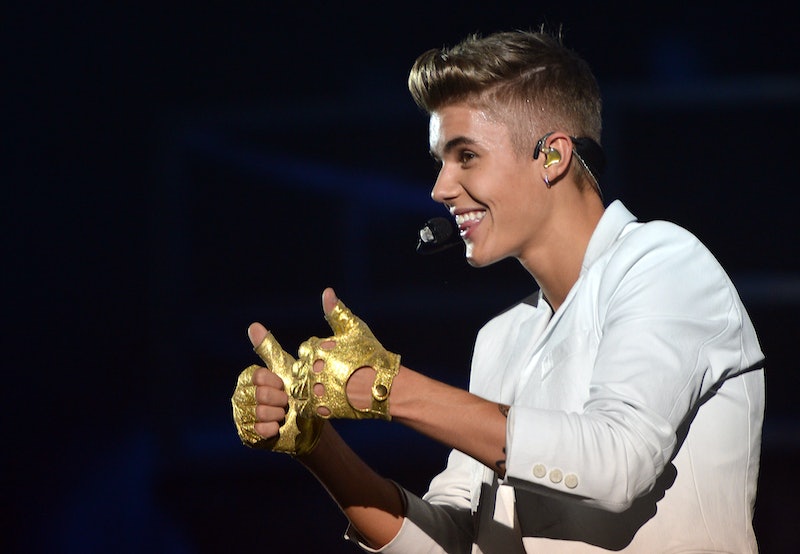 Attention, world!! The great tour of Justin Bieber trying to prove that he can make fun of himself continues!!! The new Justin Bieber Roast promo makes fun of his Calvin Klein commercial and gets Biebs himself in on the joke. The latest ad for the Comedy Central Roast, which airs on March 30 and will be hosted by Kevin Hart, opens with Bieber going ham on his drum kit, like in that Calvin Klein commercial that we all should’ve stopped talking about a month ago. Making fun of the Bieber's commercial was funny in the beginning, sure. But really, guys, let's shut it down. My verdict of this promo? It's meh, kinda not that funny. The egg-pelting clip was far more satisfying.

In the ad, a blond wig-clad Jeff Ross plays the Lara Stone character. Ross whispers sweet nothings into Bieber's ear like "I'm a belieber" as the singer tries to get away from him. There's a refined art to straight manning (Jason Bateman embodies this principle) and this video proves that Bieber hasn't mastered it. His gifts lie in playing the foolish Boy King, ignorant of his own ridiculousness, who forces all of his minions to indulge his delusions that he is an imposing figure of virility, power, and swag.

In this writer’s humble opinion, he should hold fast to that role, but that’s just me! Check it out for yourself.

Is it just me, guys? Is everyone else laughing at this? I think this ultimately kills the Justin Bieber/Calvin Klein joke. Just for old time's sake, why don't we trace the life of this gambit, and assess how funny it once was.

The CK Commercial Itself

The self conscious sexiness of this commercial is STILL hilarious. Even if the commentary of it has gotten old, I'm still laughing at the idea.

Breatheheavy.com gif-ified what everyone was pretty much thinking about the CK ads: those muscles are too large not to be photographically enhanced. While this wasn't necessarily what Bieber would identify as "LOL" funny, it was sharp. Good show!

The Biebs and his team were supposedly not enthused by the aforementioned gif. Back in January, TMZ reported that Bieber's legal team supposedly threatened to sue breatheheavy.com for defamation of character. The site then issued a retraction. This is when things were getting truly hilarious. I mean, if he didn't react like this, people would probably leave him alone.

Posting the above shirtless photo was Bieber's apparent way of calling out the haterade-drinkers. "Photoshop, LOL" was his biting caption. Compounding the rumors of litigiousness, this photo just heightens the comedy of the whole situation. First of all, he's so sensitive!!! Second of all, is he in a public bathroom??

Kate McKinnon is a comedy jewel, especially in her portrayal of Justin Bieber. With the simple line, "Yo, my pee-pee's in there," she breaks him down to his totally ridiculous little kid fundamentals. This was the high point of the situation's comedy. Even HE had to admit that this was LOL-worthy.

With his participation in the parody, the waning Calvin Klein joke has officially been put out of its misery. Also, making a parody WEEKS after the PERFECT parody has already been achieved just reads as a little out of touch. If Bieber's strategy to get us to quit laughing at him is to try to be funny, it's working.

More like this
Justin & Hailey Bieber's Bond Is "Unbreakable" Amid His Ramsay Hunt Diagnosis
By Bustle Editors
Selena Gomez Is Fine Being Single, But She Still Manifested Romance On 'SNL'
By Martha Sorren, Jake Viswanath and Jack Irvin
You Might Want To Rewatch 'Elvis' For This Britney Spears Easter Egg
By Grace Wehniainen
Sadie Sink Would Escape Vecna From 'Stranger Things' With This Taylor Swift Song
By Grace Wehniainen
Get Even More From Bustle — Sign Up For The Newsletter