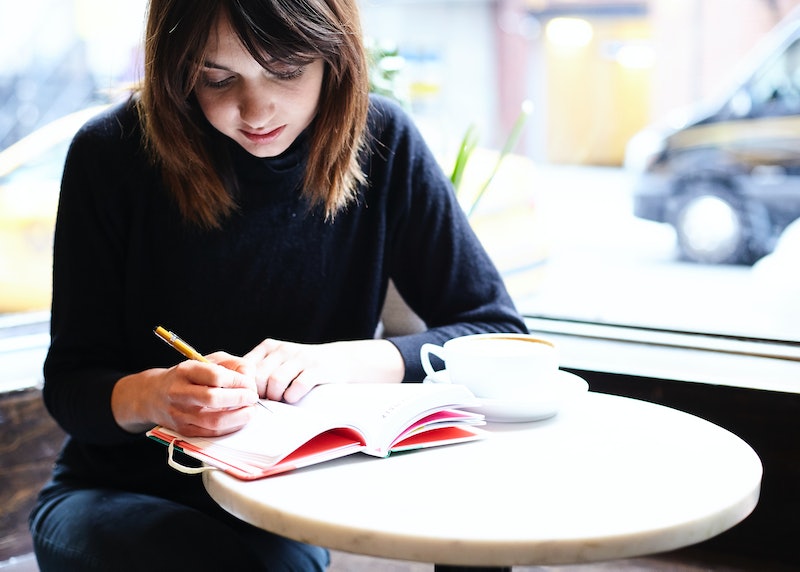 But unfortunately, praise is probably less useful than criticism. Its fundamental awesomeness encourages you to keep going, which is important, but it doesn't demand anything of you. Constructive criticism — the kind that gives it to you straight, but not mean, and doesn't come from Internet trolls — is where it's at. It will make you a better writer — even if it's hard to hear. (And you're not the only one who thinks it's hard to hear, trust me.)

It's taken me a long time to be able to admit it, but my critics (i.e., teachers, professional editors, fellow writers, and savvy non-writers) have become some of my favorite people. How did that happen? It took a lot of grinning-and-bearing it, and a lot of growing up, but I did it. And if you're a writer, I suggest getting yourself to a place where you feel the same way. Here's why:

No One Is Perfect On Her First Draft...Or Even Final Draft

As writers, a huge amount of ego is wrapped up in our work. That's natural and even important — it means we're putting our full selves into what we do. But all that ego means that even measured criticism can feel like someone is hacking apart your soul with a rusty ice-pick. *cue screams*

It's important to recognize that if someone finds fault with a piece of your work, that doesn’t mean they think you're a bad writer (or a bad human being). I used to work in book publishing, and I've read some seriously "meh" early drafts that have gone on to become excellent books, because their authors are excellent writers. And even acclaimed novels have "flaws" that are fussed over in reviews and debated by readers. So your writing isn't sparkly princess-cut diamond perfect, and someone else noticed? Welcome to the club — you're in great company.

Eventually, you will have stared at a piece of your work so much, and tweaked it in so many small ways so many times, that reading it YET AGAIN will start to feel like staring at the whitest and blankest of blank white walls. This is why you occasionally need to take a break, but it's also why you need, as in SERIOUSLY REQUIRE THIS IS NOT AN EXCEPTION WHY ARE YOU LOOKING AT ME LIKE THAT, an editor. Your editor's brain won't be as desensitized to your work as your own will, and they'll be able to notice all sorts of problems that you're no longer able to see.

Sometimes You're Not Saying What You Think You Are

Sometimes a point you think is crystal clear is not actually coming through to your reader. Like you know you're talking about cats, so when you read your own writing back to yourself you're like, "Yeah, duh, I'm totally talking about cats because that's all I ever talk about." But you haven't actually mentioned cats, or anything obviously cat-like on the page, so your reader is all like, "WTF why is the main character's roommate suddenly licking her face???" If other people can't follow what you're trying to say, you have a problem. Remember that you write to communicate, and the only way to know whether you're doing it effectively is often to have someone else tell you.

Constructive Criticism Will Make You Stronger

The first semester of my senior year of college, I did an independent study with a member of the creative writing faculty. Two weeks in, he hit me with this: "You are interesting. So why is your writing boring?"

It was a joke...sort of... but the comment was such a screeching five-alarm wakeup call that I still remember it all these years later. He was getting at something I knew deep down was 100 percent true: I was using technical proficiency — in my case, a certain kind of literary "prettiness" — to hide the fact that I was terrified of putting too much of my own mind out there for public scrutiny. As a result, my work was honestly kind of boring. I have never, in my entire creative life, improved so much so fast as I did that semester. And it's in large part because I had the amazing fortune to work with someone who totally supported my work, but was a total hard-ass in doing it.

Find the people who are willing to be totally honest with you...and oh, my God, listen to them.

Opening Yourself Up To Criticism Will Give You Courage

Criticism Is Going to be Part Of Your Career For Life

Say that last part again with me: FOR LIFE. If you're a professional writer, dealing with feedback is part of the job description. Journalists and authors go through at least one, and often several, rounds of editing before their work is published. Then, it's going to be professionally reviewed and commented on — if you're lucky. Your entire career is going to involve other people shoving your face in what they perceive to be your creative weaknesses. It's 100 percent legitimately hard, but if you can't take it in stride and learn to extract the pearls of actual useful wisdom from all that noise, writing professionally is probably not for you.

Being a professional means acting like a professional when dealing with other professionals. Period. Agents and editors want writers who can take criticism without falling apart. They will take this into account when deciding whether to work with someone, especially new writers who don't have a track record of critical and commercial success. There's nothing wrong with asking an editor to justify the changes they suggest — in fact, as someone who's both a writer and an editor, I'd encourage you to do this — but you need to be able to have that conversation without throwing a tantrum or having an emotional meltdown.

Open as many bottles of wine as you want, though. That's fine. You will need them for revisions.

So when someone gives you some tough love, take a minute to feel your feelings. Feelings are meant to be felt. But put your feelings in perspective so they don't get between you, the work you need to do, and the people who will help you do it. These people are a force for good — the good that is you, being the most badass writer you can possibly be.