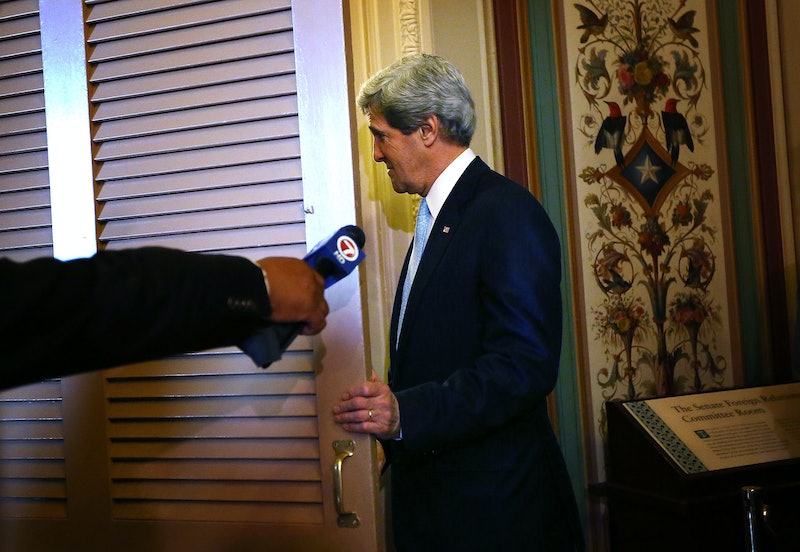 Secretary of State John Kerry and United Nations special envoy for Syria Lakhdar Brahimi issued an urgent call for peace talks on Syria, where a brutal civil war has raged for over two years. "We believe it is urgent to set a day, to convene the conference and work toward a new Syria," Kerry said after the two met at the home of the U.S. ambassador to Britain.

Arab Spring riots in March of 2011 set off uprisings and retaliatory attacks by President Bashar al-Assad's government that have claimed over 100,000 lives. "There can be, there will be, a political solution if everyone gets together and works for it," Brahimi added.

Peace talks are just one of the many options that had been considered by the international community in attempts to halt the bloodshed in Syria. The United States had previously flirted with limited military intervention in the country, and the international community had considered arming rebels opposed to the Assad regime. (Too bad no one knows who those rebels are affiliated with, we have since learned.)

But the duo indicated that a transitional government would not have room for Assad at the helm. "We believe that President Assad has lost the legitimacy necessary to be a cohesive force that could bring people together," Kerry said. Assad earned the ire of the international community after an Aug. 21 chemical weapons attack in a suburb of Damascus, believed to have been carried out by his government. Over 1,000 Syrians are believed to have died in the attack.

That incident sparked a world-wide campaign to sanction Assad's government. Eventually, the United Nations Security Council agreed to send weapons inspectors into Syria to first destroy the regime's ability to mobilize chemical weapons, and then to destroy existing supplies of them. The inspectors began their work in October, but many Syrians said that the focus on chemical weapons distracts from other brutalities of the war.

But the weapons inspectors have faced difficulties in the rebel-held areas of the country, despite the Assad government's apparent cooperation. Roads “change hands from one day to another, which is why we appeal to all sides in Syria to support this mission, to be cooperative and not render this mission more difficult,” said Ahmet Uzumcu, head of the Organization for the Prohibition of Chemical Weapons, which has been tasked with disarming Syria. Many rebel groups are not cooperating with the investigations.

The call for urgent talks comes after seven aid workers with the International Committee of the Red Cross were kidnapped on Sunday, after assailants sprayed their convoy with bullets. The Syrian government in Damascus blamed the attack on rebel groups, whose al Qaeda-linked factions have warned that Westerners in the country, including aid workers, are subject to danger. The nationalities of the workers have not yet been released.

More like this
Watch Jacinda Arden’s Devastatingly Honest Resignation Speech
By Sam Ramsden
What The UK Blocking Scotland’s Gender Recognition Bill Means
By Sam Ramsden
5 Striking Parallels Between Princess Diana & Prince Harry’s TV Interviews
By Catharina Cheung
Man Meets Politics: ‘Boy Meets World’ Star Ben Savage Is Running For Congress
By Jake Viswanath
Get Even More From Bustle — Sign Up For The Newsletter
From hair trends to relationship advice, our daily newsletter has everything you need to sound like a person who’s on TikTok, even if you aren’t.