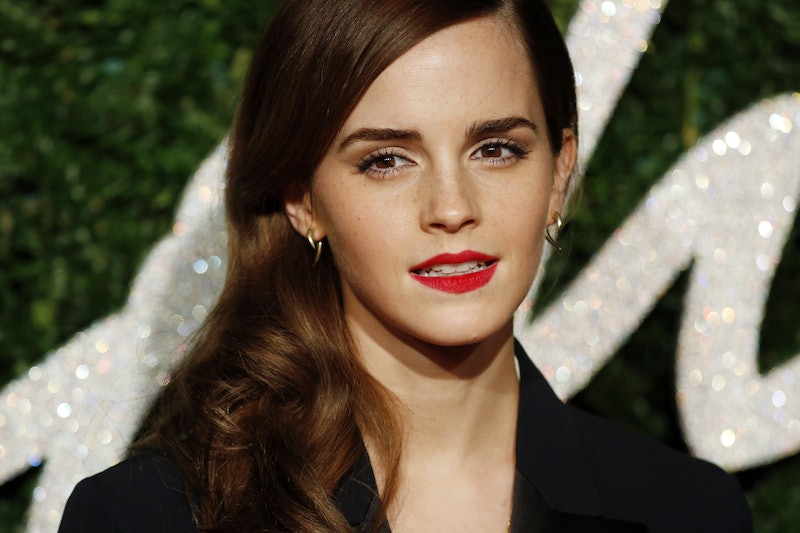 It's no secret to anyone who's ever interacted with me for more than 30 seconds who my favorite Harry Potter actor is, and Emma Watson's International Women's Day HeForShe Q&A just verifies my belief that she is an international gem to be treasured forever. No matter how many dogs he walks at once or how well he raps on national television, Daniel Radcliffe just can't compete with Watson's combination of intelligence, eloquence, and most importantly, her commitment to feminism. Like it or not, international celebrities on Watson's level command massive amounts of attention, and rather than retiring to Aruba to fritter away the days sleeping on piles of money, she has chosen to campaign for the rights of women worldwide. Last year, she was named a Goodwill Ambassador by UN Women, and her subsequent speech on behalf of the HeForShe campaign made headlines for its powerful message, which was delivered with surprising humor.You can imagine how excited we all were at Bustle when we heard that Watson would be holding a live Facebook HeForShe Q&A session on International Women's Day, and once again, Watson did not disappoint. The audience questions were engaging, her answers were thoughtful and nuanced, and I did a lot of muttered agreement at the computer screen despite my cat's judgmental stare from across the room. Watson's understanding of feminism, its intersectionality with other communities, and its relevance even in so-called "post-feminism" societies is pretty much flawless. Women's rights activists are so often shunted aside and considered a fringe group in pop culture that Watson's unapologetic, public decision to call herself a feminist makes a pretty significant statement, and she knows it. In fact, I kept finding myself wondering what it would have been like to have a role model like her in high school, where I was literally the only girl who called herself a feminist in any of my classes. With that in mind, here are a few of the most important messages Watson had to say about feminism that I wish I'd gotten to hear growing up.

1. "I think it's something incredibly positive."

Feminism is often equated with misandry by people who have a seriously misguided interpretation of the definition, but Watson has made a point of including men in her efforts for equality. If more teenagers were aware that feminism goes both ways, they may not grow up associating a stigma with the word.

2. "Translate passion into really doing something."

Watson pointed out that equality isn't going to achieve itself — instead of just rolling your eyes at misogyny, it's hugely important to actually do something about it. Otherwise, things will never change.

Once again, Watson tackled society's devaluing of feminine qualities, like expressing emotion. Talking about your feelings isn't weak; it's what makes you a person.

4. "Wherever you live in the world... you can access a whole community of other people who think differently and who want to support you."

This one is especially important for kids who feel completely alienated from other teens. The world is bigger than high school, even if it doesn't feel like it at the time.

5. "Why are we not telling women's stories? Why are women not telling their own stories?"

Watson's response to the abysmal reports on the demographics in Hollywood was pretty much perfect.

Despite what your parents, teachers, and peers might say, you're the one who makes decisions about your life.

It might feel pointless to step in when you see something sexist, but small actions add up.

8. "Be willing to question things."

Change will never happen unless we question why things are the way they are.

In short, there's only one word for Emma Watson: