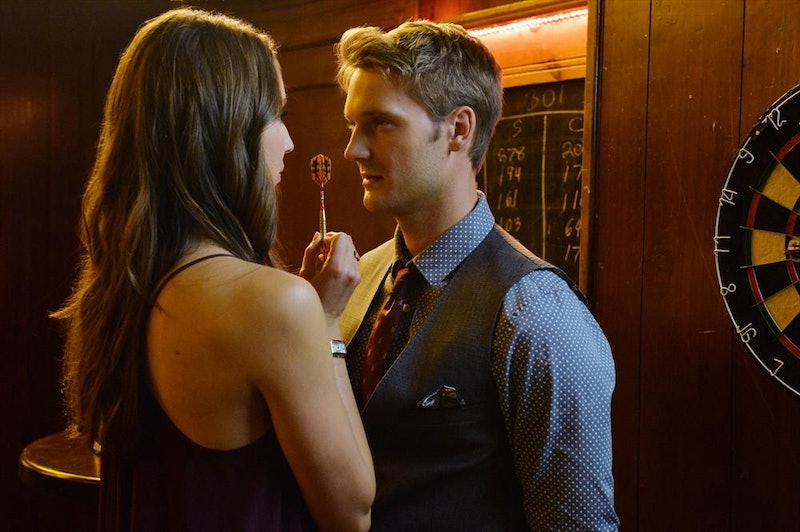 There's no use in wishing for a simple Pretty Little Liars episode, because it's never going to happen. The twists and turns keep coming on the show, and it doesn't look like A or the Liars are going to be slowing down anytime soon. So let's add another layer to the greater mystery of Rosewood, and try to figure out who the heck is Varjak, the mysterious name introduced two weeks ago episode. He/she/it has clearly got its foot in the A game, and now it's time to narrow down suspects. Could Varjack be two people: Wren and his friend Colin?

Wren has always been a complicated Liar accomplice on the show, considering his ties to not just Melissa and Spencer, but Hanna, too (remember when he TOTALLY came on to Hanna? Mere seasons ago, but it feels like fifteen years). There's also always been hushed talk of Wren being A himself, but it's one of those theories where while there's evidence, there's not a whole lot evidence, you know? But then again, let's stop trying to pretend that anything about PLL makes the least bit sense, and just continue on enjoying the ride.

But now there's a new Brit involved, too. Wren and Melissa's roommate — sorry, flatmate — Colin who showed up basically just to take Spencer out for some Shakespeare and a pint. Not that I'm against PLL introducing dashing British gentlemen just to woo our Liars, but why introduce him if he's not going to do anything else? Even Andrew gets to do some stuff right now, and we totally forgot about him for two seasons (after the whole Spencer and pills thing, remember?).

ANYWAY, Wren and Colin, together, seem rather suspicious.

It was a little bit strange that when Spencer showed up to their flat, and both Wren and Melissa were MIA. Might that have been the plan all along? Do we know for certain that Colin even is their flatmate? Correct me if I'm wrong, but does Melissa even reference him at all during her and Spencer's talk? It seems totally possible that Wren might have organized the whole Colin-thing just to keep Spencer from snooping around. I've always suspected Wren has been a part of the greater A mystery, and his lack-of-appearance in last week's episode only confirmed it more.

So how do these two play into the greater Varjak mystery? I firmly believe that PLL wouldn't just re-introduce a character, and a British friend for him, in the first act if they're not going to be useful by the third act. It's a PLL Chekhov's gun, if you will. As much as I'm all for Spencer having a overseas fling, why waste good episode time explaining it if it won't mean more later?

(And also, seriously where was Wren during the entire episode? Was he back in Rosewood? Ordering a pizza?)

There are so many PLL questions, and as always, so few PLL answers. The mystery behind Varjak is going to take front seat right now. We've always assumed that A had helpers, so the same should be assumed for Varjak, too. And if I'm right, the Varjack fella just might have a winning smile and a British accent too.

More like this
Every Horror Movie Reference In The 'PLL: Original Sin' Premiere
By Alyssa Lapid
The 'PLL: Original Sin' Creators Say A’s Identity Will Be “Very Clear” By The Season Finale
By Alyssa Lapid
What's New On Netflix: A Third '365 Days' Movie & Lili Reinhart’s New Film
By Arya Roshanian
15 Photos Of The 'House Of The Dragon' Cast At The Show's UK Premiere
By Radhika Menon
Get Even More From Bustle — Sign Up For The Newsletter