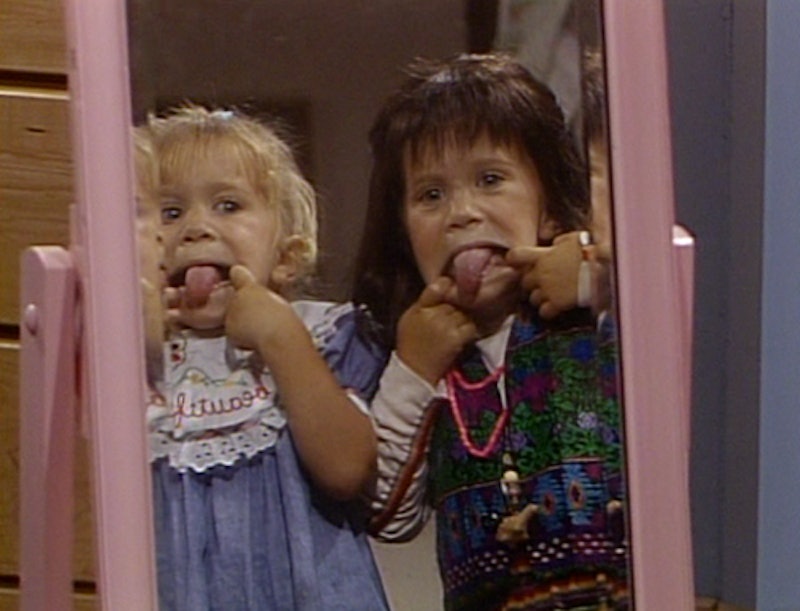 Even if you spent every school-day afternoon perched in front of ABC Family, there are probably a lot of things you've forgotten about Full House over the years. Perhaps you don't remember that time Topanga guest-starred as a mean classmate of Steph's, for instance. Or maybe you forgot about the episode in which Jesse tried to ride his motorcycle on the ledge of a parking garage. Or, possibly you can't recall the time that Steph accidentally drove a car right into the kitchen — just kidding. Of course you remember that.

Still, even the most devoted of Full House fans have to admit that there are a few blank spaces in their memories of the show; how could there not be, when the series lasted eight years and was filled with hundreds of detailed, jam-packed storylines? It's understandable if, over the years, some elements of the series that might've been important at the time may have slipped your mind— for instance, the fact that several times throughout the show's run, both Mary-Kate and Ashley Olsen appeared in the same episode, rather than rotating in the single role of Michelle.

If you're as shocked as I was, recently, to have forgotten this major detail, read on to refresh your memory:

Reason for appearance: A freaked-out Jesse, feeling anxiety over caring for the family, sees two Michelles (plus the rest of the Tanners) in a dream sequence.

Cuteness level: One baby Michelle is cute. Two baby Michelles? Adorable, even if all Jesse could see was double the amount of pressure to be responsible for the family.

Reason for appearance: Jesse's Greek relatives visit, including Melina, a young girl who happens to look identical to her cousin Michelle.

Cuteness level: Off the charts. I mean, just look at this gif!

Reason for appearance: Told by Jesse not to mess around with his off-limits recording studio, Michelle battles apparitions of her good and bad consciences.

Cuteness level: "Good" Michelle is nothing special; plenty of the kid's typical bright, skirted outfits could've fit the criteria. But "bad" Michelle, in biker gear and a bandana? Too cute to handle. That was totally Mary-Kate.

Reason for appearance: Suffering from amnesia after falling from a horse, Michelle's memory returns in the form of... her identical self.

Cuteness level: The Olsen twins were old enough by this point that their mere appearance didn't induce "awws." Still, they have to hug to reunite the selves. That's pretty darn cute, and it made the already emotional series finale even harder to take.