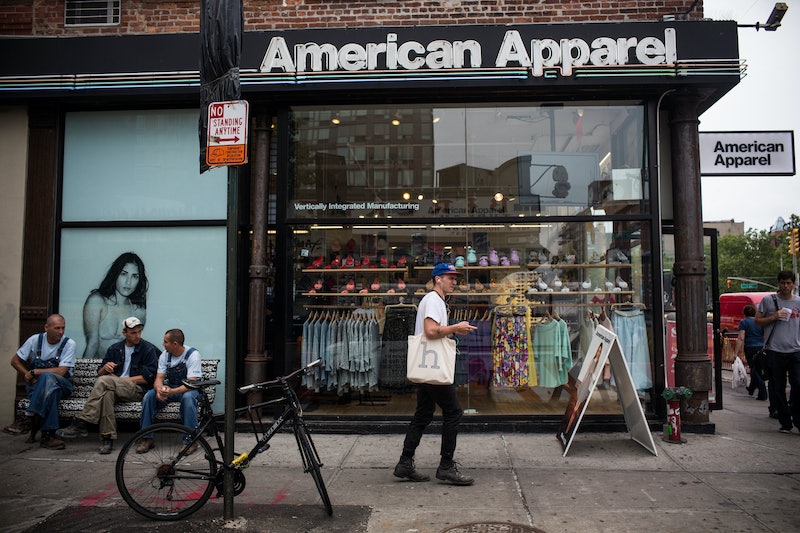 An American Apparel ad banned in the U.K. is causing a stir on the Internets, and I am not surprised (but neither are you, probably). This time, AA is in trouble for featuring a fresh-faced redhead in a spandex, thong body suit. What's the problem? The bare ass cheeks, obviously, but the UK's Advertising Standards Authority (ASA) is also claiming the model looks super young, and therefore the ad could be interpreted to "sexualize a child," according to The Frisky.

Exposure, sexuality, and young models are AA's modus operandi. You might remember our story from last year when AA was in hot water with customers for featuring an upskirt photo on the company website (and also the time when they featured a bare-chested model). That's not all, of course — they've used (I can't believe I'm typing this) a picture of an exposed asshole in a marketing campaign.

I wish I was kidding. I really do.

Part of the AA brand is blurred lines. They often feature faux-natural looks, young models, and some semblance of nudity. According to The Daily Dot, this approach (can you even call it that?) to marketing and campaigns was championed by former CEO and alleged sexual harasser, Dov Charney. Charney has been sued multiple times by former employees of the company for many awful reasons, including strolling his factory floor wearing only his underpants and using adverts that verge on pornography—including one featuring himself and two women captioned: 'in bed with the boss.' Gross.

But let's take a look at the issue at hand, shall we? AA claims the model is 20, and she certainly looks of age to me. I don't think because a woman looks young, society should dictate what she wears in order to "protect" her or ward off predators. A man's control (or lack thereof) of his own sexuality and morality is not my problem. I'm not going to wear, or not wear, something because someone else can't handle it. A man's morality is not my responsibility. Ever. Period. It is his own, and society should stop making a woman responsible for a man's poor actions.

Secondly, I don't understand throwing our hands up at the fact a perfectly normal, lovely, curvy bottom is on the internet. Isn't that what we all wanted, what we cry for on the digital space? For more accurate, natural, healthy representation of women in fashion and media? Well here it is, and we're balking. Personally, I think she looks great: Natural, lovely, beautiful, and yeah maybe sexual. But so what?

In and of itself, I think this particular model and ad is perfectly fine. However, combining this with AA's internal and external history of pushing boundaries just for the sake of doing so makes it seem cheaper and worse than it may really be. Am I glad AA is getting a slap on the wrist, finally? For sure. I just think it's too little, too late.

More like this
Berriez Founder Emma Zack On Her Size Inclusive NYFW Show
By Dominique Norman
The 12 Best Strapless Bras That Won’t Slip & Fall Down
By Audrey Williams and BDG Commerce
Prefer Alcohol-Free Perfumes? Water-Based Fragrances Are On The Rise
By Audrey Noble
How To Get Your Hands On The Pat McGrath X Supreme Nail Kit
By Justine Knight
Get Even More From Bustle — Sign Up For The Newsletter