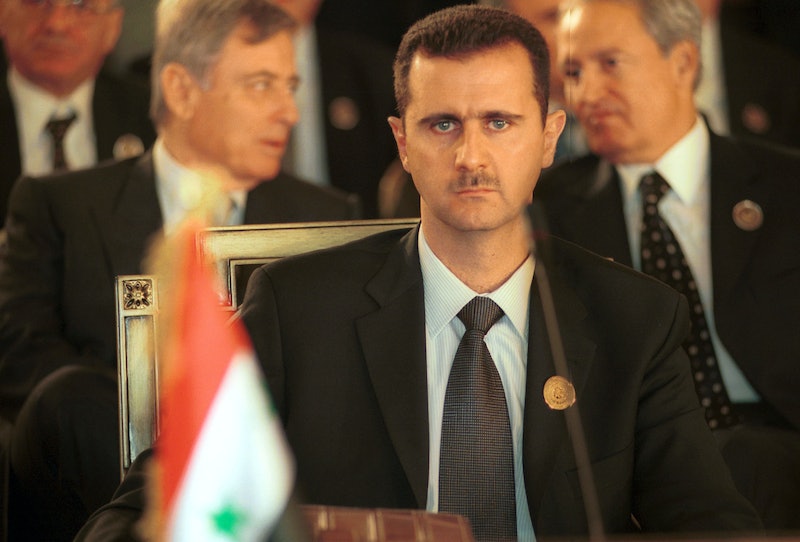 Syria peace talks might happen as soon as late November, the country's deputy prime minister said Thursday. Speaking at a press conference in Moscow, Qadri Jamil named the weekend of Nov. 23-24 as a possible dates for an international meeting that would try to end Syria's two and a half year bloody civil war.

"We are closer than ever to holding the Geneva 2," Jamil said, adding that the talks would end "foreign interference" in the conflict. (It's unclear from news reports whether the foreign influence in question is from the west, or from extremist groups like al-Qaeda.) Russia's foreign ministry spokesman, Alexander Lukashevich, said that Jamil and the Syrian government would not be setting the dates, and that the task would fall to the U.N.

The peace talks, dubbed the "Geneva 2" conference, are widely seen as the best way to end a conflict that has claimed over 100,000 lives and displaced many times more. The conflict began when Syrian President Bashar al-Assad's regime began cracking down on protestors after Syria's Arab Spring, and the Assad government's violence against civilians has been understood to be a desperate attempt to stay in power.

But the international community came down hard on Assad after videos surfaced of an alleged Aug. 21 chemical weapons attack on a suburb of Damascus, the Syrian capital. After continued pressure and the threat of a military strike by the United States, Syria and its ally, Russia, agreed to a United Nations Security Council resolution that would send international inspectors into Syria to disarm Assad's chemical weapons machinery. The inspectors hope to complete the first part of their task by November.

In the meantime, Assad has revealed that he isn't sure he will run for reelection — a good thing, anyway, since the international community has declared that he has squandered the credibility necessary to be the leader of a peaceful Syria. Earlier this week, Secretary of State John Kerry called for an "urgent" peace conference on the crisis, and to decide who will take over the war-torn country.

Representatives from various rebel groups are likely to be part of whatever government takes shape. But George Sabra, a Greek Orthodox Christian who is the head of the Syrian National Council opposition group, said his group would not attend the conference. Sabra and his opposition group are based in Istanbul, Turkey — the base-in-exile for a host of Western-supported opposition leaders. (Opposition groups still in the country, on the other hand, are allying with and being supplemented by radical jihadi elements from abroad — also unlikely participants in formalized peace talks.)

But Jamil said that the peace talks would not stop for the rebel groups. "The refusal of the Syrian National Coalition to participate in the Geneva 2 will not influence the conference's timeframe and format," Russia's Ria Novosti quotes him as saying.