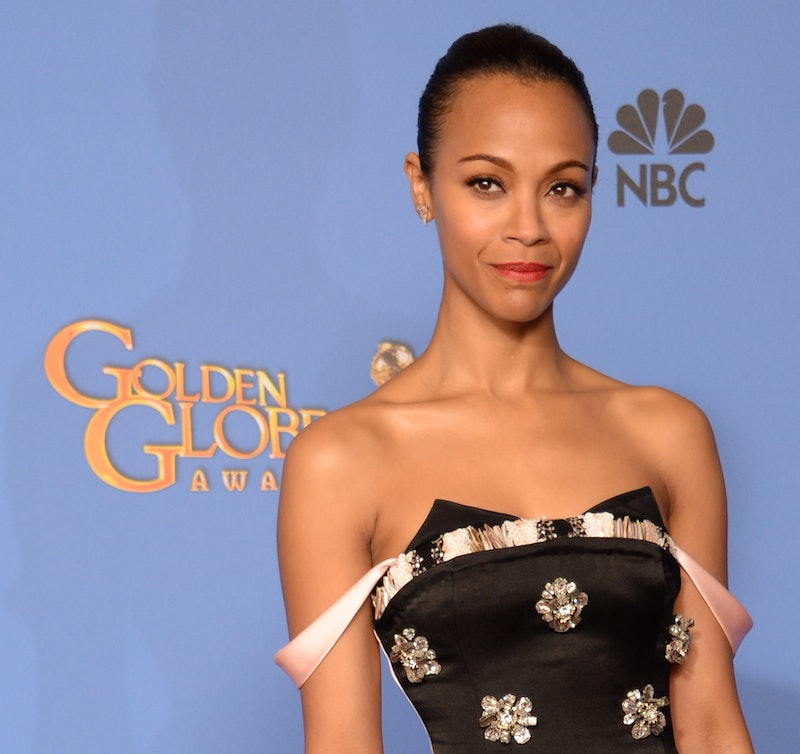 Fashion still hasn't learned that if it reaches its hand in fire, it will definitely get burned. Such is the case with the recent controversy circulating around Italian-based fashion house Dolce & Gabbana this week. While some have decided to boycott, others have decided to side with them, such as actress Zoe Saldana, who shared her thoughts about Dolce & Gabbana, and in summary thinks that everyone just needs to relax and take a drink.

When asked at last night's GLAAD Media Awards if she would boycott the brand like other celebrities are doing, she responded that she would not be letting go of her D&B staples and that, to her, the boycott is one of the stupidest things. According to E!, Saldana stated while on the red carpet:

"No! Not at all, that would be the stupidest thing if it affected my fashion choice," Saldana told E! News exclusively at the 2015 GLAAD Media Awards when asked if she will boycott the famous brand. "People are allowed to their own opinion, however, I wouldn't have chosen to be so public about something that's such a personal thing."

She also wants to know why everyone is making a big deal about it. However, while Saldana might not find extremity in the situation, it is disproportionately alienating and offending others, such as Sir Elton John, who took to Instagram to suggest people boycott Dolce & Gabbana.

Many have already pointed out the oddity in Dolce & Gabbana's statements, which originally appeared in famed Italian magazine, Panorama. Additionally, the designers recently featured adorable babies and toddlers in its Milan Fashion Week runway show, which you think would have allowed for a little sensitivity when discussing children. In an interview, the designers, who just so happened to be gay males, said that they believed that the "only family is a traditional one" and shun what they refer to as a "rented uterus" and "chemical offsprings." Sir Elton John and his partner had children through In Vitro Fertilization.

The controversy has already ensued, with reports stating that Dolce & Gabbana have already fired back with the hashtag #boycotteltonjohn. Saldana, however, believes that the solution is to pour on a little booze to lessen the flame.

More like this
Kim Kardashian Is “Disgusted & Outraged” By Balenciaga’s Troubling Ad Campaigns
By El Hunt
Google Wants You To Shop Black-Owned The Friday After Thanksgiving
By Dominique Norman
Here Are All 703 Outfits Rachel Wore On Friends
By Kat George
The Best Heels For Bunions, According To A Podiatrist
By Margeaux Baulch Klein and Maria Cassano
Get Even More From Bustle — Sign Up For The Newsletter