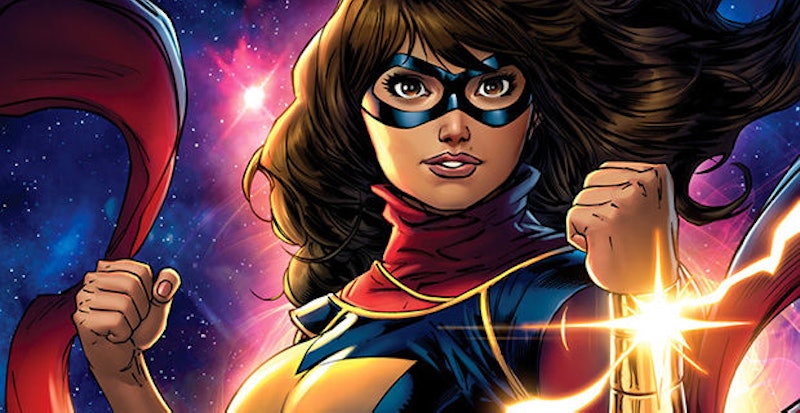 Jane Eyre. Kamala Khan. Jo March. Hermione Granger. These are just a handful of the incredible female characters celebrated in the trending #WomenInFiction hashtag. It started quite on accident, as many amazing things do, when Preeti Chhibber, a marketing manager for HarperCollins Children's Books, started tweeting out the names of some female characters that have inspired her over the years. When her followers, and their followers followers started joining in, the idea exploded into one of the biggest trending hashtags of the weekend.

Chhibber is also a host of the Bookrageous podcast, and when her show covered Strong Female Characters, Chhibber was inspired to thank writers like Roxanne Gay, J.K. Rowling, Meg Cabot, and G. Willow Wilson for creating and promoting well-rounded, realistic women in their stories.

"Cuz you know what's awesome? Reading about ladies who are real, actual people," Chhibber said on Twitter, who then began listing off some of her favorites: Kamala Khan, aka Ms. Marvel, Alana from SAGA, and Elizabeth Bennett from Pride and Prejudice, among others. It was then she started the hashtag.

People joined in all over the world to give a shout-out to their favorite female characters and the reasons they love them. The characters came from classics, contemporary, literary fiction, young adult lit, comics and graphic novels, and short stories.

We are all Ramona Quimby.

Miss Frizzle is an inspiration to adults everywhere about finding the excitement and adventure in everything you can.

Meg Murray from A Wrinkle in Time of course got her very deserved due from hundreds of #WomeninFiction hashtag users, but I love the shout-out to her magical pals Mrs. Whatsit, Mrs. Who, and Mrs Which.

Yes. This Twitter user hit the nail smack dab on the head talking about what it means to suffer heal as a human, and that no one does it the same way. Roxane Gay, she gets that.

Even the "villains" got their shout-out. You should want it all Veruca; you go get it, girl.

Princess Academy writer Shannon Hale chimed in with an epic response of the often overshadowed, but feisty and smart Turtle from The Westing Game .

The legendary Toni Morrison gets her credit for promoting strong female friendships.

Because the world can be confusing and unkind.

Arya Stark is hands down the most awesome Stark and I won't take any arguments.

Ms. Marvel herself was one of the top favorites in the hashtag because, of course.

Harriet gets hated on all too often, so let's start right here with turning that around.

Jane Eyre was another deserving favorite, and why couldn't be summed up better than from the character herself.

There's absolutely no reason this killer #WomeninFiction hashtag has to die down. Who's your favorite female character, and why does she inspire you? Shout it out loud on Twitter and keep this girl power party going.