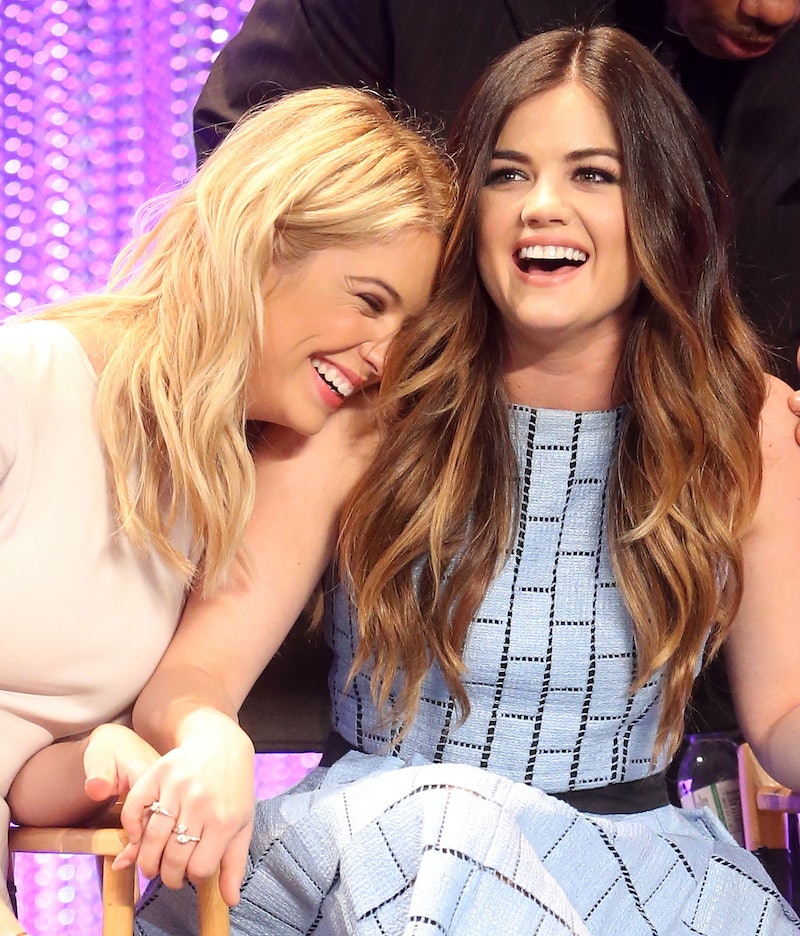 Ah, nothing like the bonds you form when you and your three best friends are on the run from a crazy stalker who's constantly trying to frame you for murder, eh? The little liars of Rosewood sure have been through the wringer and back again — and they've got the strong friendship to prove it. Yep, Aria, Hanna, Emily and Spencer are pretty much willing to kill and die for each other (unless one of them turns out to be A, of course), but can the same be said for the actresses who portray them? Are Lucy Hale, Ashley Benson, Shay Mitchell and Troian Bellisario, aka our titular Pretty Little Liars , friends in real life?

Well, it may not be the same as going on a sort of twisted scavenger hunt for a doll-loving sadist, but there is the little fact that these ladies spend a good chunk of their lives together — we're talking 15-plus hour work days. It may not be life or death, but it is the stuff that either means the chilliest work environment ever, or some almost familial friendships... and in the case of PLL, I'm guessing it's closer to the second option. So, even though there's nary an A in sight (though Ashley did have a religious stalker at one point), it looks like the real-life PLL cast members are friends too.

They're quite the three amigos, finding time to hang on and off set. Their closeness has even sparked rumors of a feud with their fourth cast member, Lucy. That said...

I'm guessing her solo album was largely the reason behind her so-called "freeze-out": Going on tour and cutting an album does take time, after all, which could definitely explain why she didn't make it into as many selfies as her three co-stars.

Besides, Ashley and Lucy Go Way Back

They go far enough back, in fact, that Lucy was a guest and Ashley's sweet 16... and guess how they met? Allegedly, through mutual friends on Myspace. Yep, you heard that right: Myspace.

And Ashley's Gone Out of Her Way to Disprove the Feud

By screenshotting selfie-texts, of course!

Though of the Four, Ashley and Shay are the Besties

Seems like they're true BFFs — they even went on vacation to Hawaii together over the summer.

What a fun looking bunch, eh? And they sure make you want to gear up for the spring/summer season with a brand new pair of sunnies!

More like this
Every Horror Movie Reference In The 'PLL: Original Sin' Premiere
By Alyssa Lapid
The 'PLL: Original Sin' Creators Say A’s Identity Will Be “Very Clear” By The Season Finale
By Alyssa Lapid
Tom Holland Explained His Social Media Break & Shared Mental Health Resources
By Grace Wehniainen
Gemma Collins' Net Worth Is Only Going Up
By Catharina Cheung
Get Even More From Bustle — Sign Up For The Newsletter