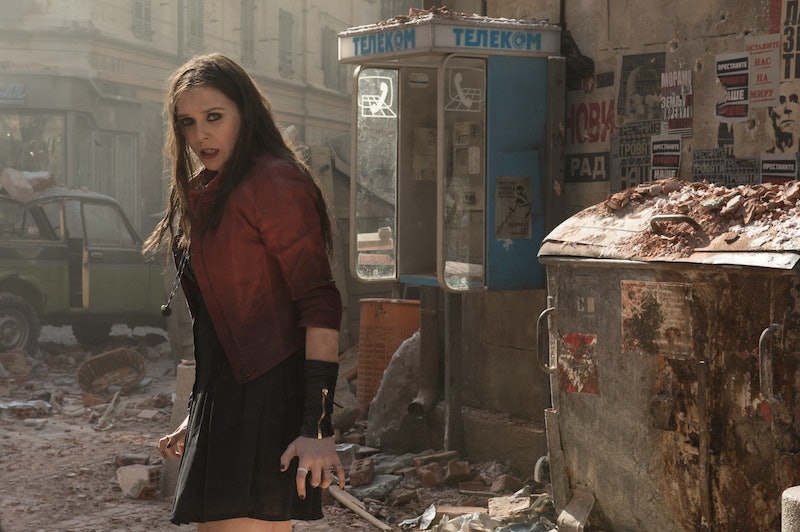 Earth's Mightiest Heroes are about to face a force they are gloriously unprepared for, and I'm not talking about Ultron. The highly anticipated Avengers sequel, The Avengers: Age Of Ultron, will feature "The Twins," aka Quicksilver and Scarlet Witch. Aaron Taylor-Johnson will play the fast-talking, fast-moving comic character Quicksilver — but Cap, Iron Man, and the gang should really be worried about Elizabeth Olsen's magic-wielding The Avengers sorceress, Scarlet Witch.

Scarlet Witch, aka Wanda Maximoff, is one of the most powerful characters in all of the Marvel comics. As she's able to wield what's referred to as chaos magic, she has the ability to alter the very fabric of reality to suit her needs. There have been moments in the comics where she merely wished other heroes out of existence — it's pretty powerful stuff!

However, the big-screen version of Joss Whedon's movie will have some differences. For one, she's not a mutant; 20th Century Fox owns the movie rights to the X-Men universe, which means no mutant talk in Avengers. But Scarlet Witch has a new origin story and an array of powers that make her a formidable figure.

To prep you for her debut in Avengers: Age of Ultron on May 1, here are some reasons to get pumped!

When we first meet Scarlet Witch and Quicksilver in the mid-credits scene of Captain America: The Winter Soldier , they're adapting to their powers in the possession of Hydra. A prequel comic book was released for the film that revealed they received their powers from a Hydra member's experiments with the stone in Loki's scepter. This implies that she and her brother are Inhumans. We know Marvel has a solo Inhumans film scheduled for release in 2019, and this species of superhero get their abilities after being exposed to a special mist. Could this change from the comics to the movies?

2. She Introduces Magic To The Avengers

As her name implies, Scarlet Witch can wield magic, which is a big element of the Marvel comics. It opens up a whole new environment of alternate dimensions and supernatural threats. We'll be seeing more of that when the new "Sorcerer Supreme," Benedict Cumberbatch, debuts in the solo Doctor Strange movie, but we'll get our first taste with Scarlet Witch.

Wanda can work magic with her hands...literally! That first trick with the blocks we saw in The Winter Soldier was child's play compared to when she's at full power. With a flick of her wrists she can send a barrage of Ultron's sentient robot minions flying backwards.

4. She Can Get Inside Your Head

While here telekinetic abilities are certainly formidable, it's her ability to manipulate minds that'll really cause problems for the Avengers. Marvel recently released 13 "fun facts" on Age of Ultron, one of which is how Scarlet Witch does her thing: "She is able to fire neurons in people’s brains remotely using her powers and as a result can manipulate their minds." That's why we see in the trailers that Hulk is freaking out on his team, Black Widow hallucinating memories from her younger years as a ballerina, and Captain America going back to the 1940s.

5. She Has A Troubled Past

As we learned in the same prequel comic I mentioned earlier, Wanda and her brother Pietro are citizens of the fictional nation of Sokovia. They are part of a protest movement against their corrupt government when Hydra approaches the group with promises to grant them power to fight back. However, the twins are the only two to survive Hydra's experiments. This origin tale explains why the two start out fighting the Avengers in the beginning of the film.

6. She's More Of A Dancer Than A Fighter

Unlike the other Avengers, Scarlet Witch is not really a fighter. Her abilities are more elegant than "Hulk Smash!" As such, Olsen didn't have to do that much stunt training. "Joss was really inspired by dancers, and so he knew that he wanted to change visually how [Scarlet Witch] moves, to be more like a dancer than a fighter," she said. She even trained with professional dancer Jenny White.

7. She Has An Over-Protective Brother

Wanda is very protective of her brother, and vice versa. The two are all they have, since they are both orphans in the comics. Johnson described their relationship a while back as "very yin-and-yang." She's psychological. He's more physical. But they both won't hesitate to attack anyone and anything threatening each other.