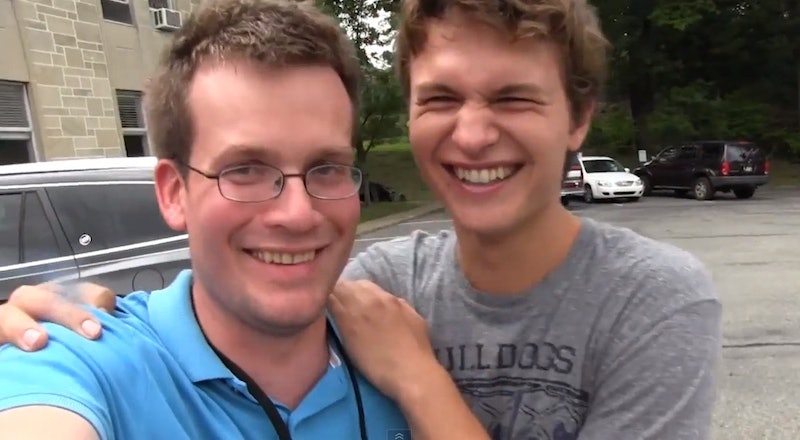 It's a match made in bromance heaven. John Green and Ansel Elgort have had no problem showing their affection for one another ever since fate brought them together on set of The Fault in Our Stars. These two men — one, a nerdy 30something author, the other, a young talent with boyish good looks — can't stop gushing about one another, and for good reason. Elgort played Augustus Waters, the male protagonist of Green's adapted novel, and the two bonded over their shared time on set. So when Paper Towns — the latest John Green adapted novel — started production, Elgort couldn't keep himself away. While he wasn't cast in the film, BFF Green and on-screen and real life friend Nat Wolff were both waiting on set with open arms.

"Aren't you sick of that guy yet?" I ask John Green, which prompts a hearty laugh from the author. "No man, I was so happy," he says. "It was amazing. It was such a wonderful day. As I've said, I didn't really have a job on the movie, so it was just a day I got to hang out with Ansel, who's awesome."

But his sentiments didn't stop there. "I love him so much," Green admits. "I care about him so much. I wish him all the best. I was excited to go see Insurgent," he says, of Elgort's latest movie (co-starring his Fault in Our Stars love interest, Shailene Woodley). "I was so happy to see him. It was just such a great day. Any day I get to spend a day with Ansel or Shai — or both of them — is a very happy day for me."

Further proof of the pair's unconditional love can be found in Green's infamous vlogs, often starring the actors in his adaptations. Take a look at their adorable banter: