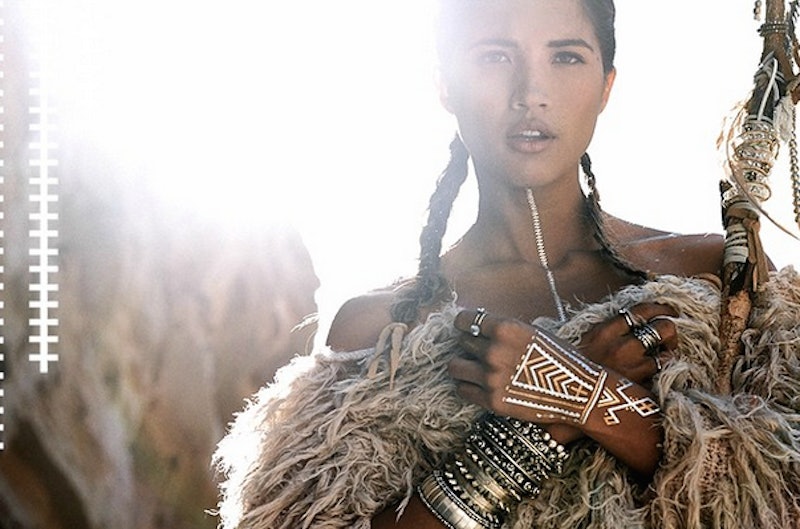 All the rage for 2015 are metallic temporary tattoos, a trend expected to be ubiquitous on this summer's festival circuit. And although I'm one of those people who tends to criticize festival fashion trends for their frivolity, it's hard for me to hate on this one. Temporary tattoos, in general, are whimsical and fun, even for someone who's got a couple of permanent ones. I definitely have warm, fuzzy memories of getting temporary tattoos of cartoon characters in goody bags at birthday parties and from the dentist's office, and being so excited to put them on myself. There was also definitely a phase in college where my housemates and I slapped temporary tattoos all over our bodies before going out.

This newest, trendiest type of temporary tattoo is more appropriate for adult company than the Power Rangers and butterfly tattoos of childhoods, or drunken college parties, past. These jewelry-inspired, metallic temporary tattoos create a wonderful illusion of having a perfectly delicate gold bracelet around your wrist or silver necklace around your neck, without any fear of losing them. The pieces they're replicating would be heavy and intricate if made from real metals, but since they're just tattoos, there's no issues with weight, making them perfect accessories when you're tromping around at an outdoor concert for two days.

I have no problems with the tattoos themselves because they're innovative and clever and whimsical and gorgeous. I do, however, have a problem with the way they're often marketed. With names like "Dakota" and "Desert Dweller," many brands that design metallic temporary tattoos play into fashion's bad habit of appropriating from native (and foreign) cultures in a quest to create something "exotic."

Many of the brands cite "traveling the world" and "exploring different cultures" as a major design influence, and although these are valid ways of finding inspiration, in practice, these cultural cues are mixed and presented as a weird hodgepodge of references in a single collection. For example, Flash Tattoos' collaboration with Child of Wild combines, "ancient Egyptian glyphs and Indian henna designs mixed with Native American shapes and arrows." None of these references have anything to do with each other, besides the fact that they're not Western. Matching these together makes the designer seem entirely ignorant of the cultural differences, and does not make for a coherent, cohesive collection.

Flash Tattoos also feature a collection called Sheebani, named after, "the orphan child who was the inspiration for the creation of The Miracle Foundation." This collection is a bit more cohesive than others from the brand, featuring primarily Indian-inspired imagery like a mandala and an elephant, since the Miracle Foundation is based on the sub-continent. But the inclusion of a tattoo with the phrase, "live. love. wander." plays into the idea of the East as an exotic place where Westerners can go to "find themselves," presumably in their chic temporary tattoos, rather than as a real country, with some real issues of development, where real people live and work.

The corresponding photo shoots to advertise the tattoos further play into stereotypes of exoticism. The styling heavily features boho, "gypsy-inspired" clothing, like Lulu DK's advertisements in the Bloomingdale's catalog featuring a blonde model in a tie-dye dress with tons of bracelets paired with the tats. Child of Wild's shoot with Flash Tattoos features an ethnically ambiguous, desert nomadic woman, replete with a silver ankh behind her ear and a gold cobra wrapped around her wrist and a magic, shamanic staff of some kind. It's nonsensical, and the look is almost cartoonish in the way it plays around with stereotypes of "wild" or "native" women.

The most controversial of the tats, however, is, in my opinion, TribeTats. While other brands hint at exoticism and orientalism, which is a worrisome trend in and of itself, TribeTats has made these traits an integral part of their branding. With TribeTats, you're not just applying a temporary tattoo. You're joining a tribe, according to their social media. On its website, TribeTats says its, "customers enjoy 'going tribal chic,'" which shouldn't be a phrase anyone uses ever. To go "tribal chic" is to appropriate from native cultures, and appropriation of traditional imagery without understanding the underlying meanings is simply disrespectful. This branding is further complicated by the fact the tattoos themselves are named after luxe vacation destinations like Belize and Monaco, which is perhaps better than naming them after actual tribes, but only further confuses the use of the native imagery.

For some reason, music festivals bring out the worst in cultural appropriation, and these metallic temporary tattoos only further play into these stereotypes. There's going to be a TribeTats teepee at Coachella, according to the brand's Instagram, because cultural appropriation in the name of fashion is apparently hip.

As I said at the start, I don't have a problem with metallic temporary tattoos, in and of themselves. The problem only comes when the companies use signifiers like "exotic" in branding, and consumers eat up this glamorized vision of the Orient or of native Americans without any self-reflection. If you're going to rock one of these temporary tattoos, make sure you're aware of what you're buying into. Avoid the collections that clearly cite a far-ranging mix of references in favor of the simpler designs, many of which are geometric and free from the baggage of cultural appropriation. Don't shy away from this trend, but be a smart consumer and don't play into this simplistic branding.