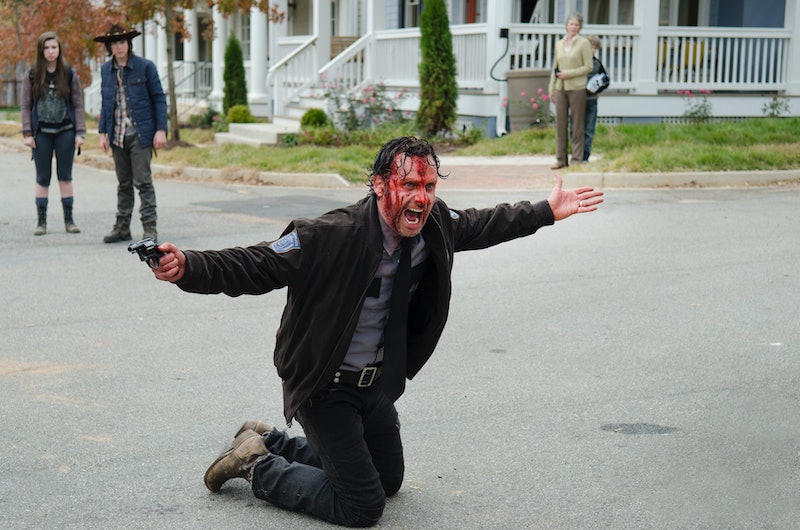 Season 5 of The Walking Dead came and went as quickly as a walker attack, so I almost can’t believe the Season 5 finale "Conquer" is on Sunday, March 29. With Rick beating the crap out of Pete, Deanna turning on our beloved group, and the potential of the hinted-at Wolves gang invading the Alexandria Safe-Zone, the 90-minute finale is sure to be action-packed, but when will Season 6 of The Walking Dead premiere? I don’t mean to blow by the Season 5 finale, but the moment it ends, every Walking Dead fan (myself included) will be wanting more. With The Walking Dead being the most-watched cable show on TV right now, there was no worry that it wouldn't be renewed. AMC announced in Oct. 2014 that Season 6 is happening, but since then, no official premiere date has been announced. Update: AMC announced at San Diego Comic-Con that The Walking Dead Season 6 will premiere October 11.

Every season of The Walking Dead has premiered in October on AMC. With the exception of Season 1 (which only had six episodes and debuted on Halloween), the first episode of each season has aired either on the second or third Sunday (with the last three seasons airing on the second Sunday) of the month. So, even without an official date, this Walking Dead fan can assume that Season 6 will premiere on either Sunday, Oct. 11 or Sunday, Oct. 18, 2015. Yes, that's a while away, but in the meantime, you can watch The Walking Dead companion series, which should be out in the late summer, or turn to the comics, which just released issue 139 this week. This calls for one of my favorite gifs of all time!

As usual with the end of a The Walking Dead season, I’ve become frustrated with some plot points that drag on. Am I just a terrible person to wish that all mourning scenes would be officially banned from the show? Yes, Sasha, I have been waiting for you to snap since both your boyfriend and brother died. And Sasha’s badass form of mourning is at least helpful to the rest of the crew since she was killing zombies (you know, as long as she didn't get herself, Michonne, and Rosita killed in the process).

But do I need to watch new characters Deanna and Reg mourn the death of their jerk son Aiden? We are in the zombie apocalypse! Everyone has lost someone close to them and I am kind of over watching characters be all depressed. (So, yes. I am a terrible person — but just in my TV watching.)

Comic spoilers ahead. A new season offers a new start. Since the Alexandria Safe-Zone is the location that the group stays in for the comic books, Season 6 should start with them still there. And most likely, with Rick in charge. Although the end of the March 22 episode "Try" wouldn’t make me think that Rick is ready to take over the Safe-Zone, I think Rick's breakdown was to show how vulnerable the walled-in city has made the residents of Alexandria.

So, if those infamous Wolves attack in the Season 5 finale, then Alexandria will know how much they need Rick Grimes at the helm. And that’s definitely something worth being excited for.