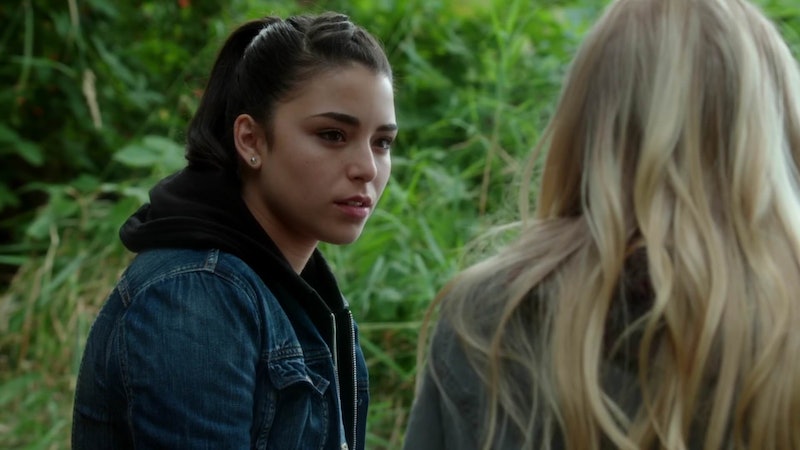 We haven't heard much about this mystery lately, but I'm ready to predict that a girl named Lily is Maleficent's daughter on Once Upon A Time . I don't mean to brag, but I'm a little bit of a super sleuth when it comes to press releases. Here is what I've uncovered about "Best Laid Plans," this Sunday's episode of Once Upon A Time. Barclay Hope is guest-starring as "Adoptive Father," but here's the thing — we've seen this actor before. He was Lily's dad in the episode "Breaking Glass." Why do I think this connects to the Dragon Lady? Check out what the official ABC press release for "Best Laid Plans" has to say.

This implies that we're dealing with Maleficent's backstory in this episode and that it will connect to later events, in Storybrooke or otherwise. Young Emma and an Adoptive Agent will also appear in the episode, but not Lily. We won't see her until Episode 19, which is titled "Lily" — if that's not enough evidence that this chick is significant, I don't know what to tell you.

Lily, as you recall, was a girl who encountered Emma fresh on the run from a foster home. They bonded over their living situation. However, when Lily's Dad showed up, the lies she told seemed to be shattered and a dejected Emma went off to her next foster home — the Snow Queen. I just love the idea that Emma has never met a single person in her life by coincidence, don't you? Everything is destiny with Miss Swan.

As I said, the last time we saw this guy, he came to get Lily from her hideaway with Emma. I'm convinced that Emma unknowingly "broke in" to her friend's family lake house, not a stranger's. Lily's Dad seemed relatively normal, and far more caring than the girl's stories would have us believe. I'm not saying she's wrong, but it raises a flag.

Why is this guy showing up now, without Lily? Why would Lily's Dad be trying to adopt Emma? Was Lily a foster child too, just as she claimed to be? My theory is that they were either a "missed connection" or this man wanted to adopt Emma and ended up with Lily. He and his family are important somehow, and I'm willing to bet that Maleficent is involved.

Would this also mean that Lily got all of the evil that Emma was supposed to get, according to Maleficent? Yikes. She didn't seem that bad. However, if she is Maleficent's daughter and had something done to her by Snow White and Prince Charming that kept her away from Maleficent, she could have a sinister future ahead. What if they transferred Emma's dark destiny to Lily?

In my heart of hearts, I hope that Lily's name comes from Mary Lennox's aunt in The Secret Garden. The classic novel also deals with grumpy female orphans. However, it's just as likely that she was given that name as a foil to Briar Rose (because lilies are a funeral flower), Peter Pan's Tiger Lily or even Walt Disney's daughter Lillian, who Bustle's Allyson Koerner speculated could be the OUAT Author that our characters seek. Wouldn't that be interesting?