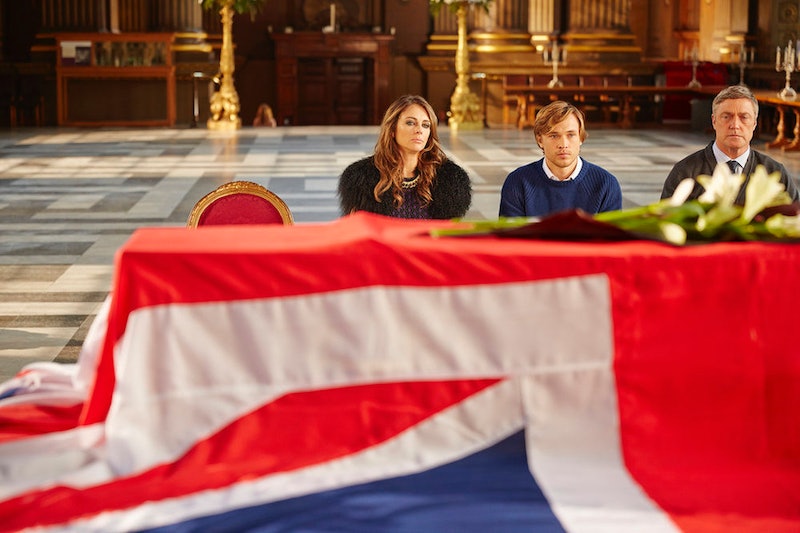 Elizabeth Hurley played the Devil opposite of Brendan Fraser in the Harold Ramis-directed (!) Bedazzled — and I'm slightly concerned/excited that she's channeling that evil energy in her current role as the queen on The Royals. With the E! show starting with the heir to the throne dying, could Queen Helena have been involved with Prince Robert's death? Sure, Hurley's Helena may be a cruel, manipulative, FML-spouting mother and queen of England, but could she really have something to do with how Prince Robert died? Although I don't think she killed her eldest son or anything (he appears to have been her favorite child), there is definitely hints that she knows more about it than the audience — or the rest of her family — know.

With only two episodes under its belt, I'm unsure of how crazy The Royals is willing to go — one can only hope that it will reach Game of Thrones-levels of intrigue and scandal. The show definitely seems to be heading in that direction, but could we believe a modern-day queen being in on the intrigue surrounding the death of her son? Hells yes! Hey — if we can buy Frank Underwood's shenanigans on House of Cards in the U.S., why shouldn't be buy the character of Queen Helena on The Royals being capable of similar actions in the U.K.?

The queen must know more about how Robert actually died because she was very withholding about his death to her other son — Prince Liam. Robert was only 23 years old at the time of his death and all that Helena revealed was that he died in a military accident. She definitely was shifty while talking to her surviving children, Liam and Eleanor, at Robert's funeral, and the topic hasn't been brought up again. But, c'mon — we know something shady must have happened. And Queen Helena knows more than she is saying.

There are also two newer pieces of evidence potentially linking Helena to Robert's mysterious death. In some of the very last moments of the second episode, "Infants of the Spring," Queen Helena made out with her secret — and super dreamy — lover Captain Lacey. He is a "highly decorated war hero" and has been having an affair with Helena for (presumably) an extended period of time (at least long enough for them to be in some sort of love). Her son died in a military accident and she's sleeping with a war hero? That can't just be a coincidence.

And if that's not enough, Jasper — Princess Eleanor's bodyguard/date rapist (yeahhh, I can't even get into that story line right now) — says in the trailer for the third episode, "The queen is lying about everything."

Ooooh, everything? Tell me more, Jasper — you problematic bastard, you. Jasper is really American (if we believe this line of his), but protecting the British princess with a faked British accent. Ophelia — whose father is head of the royal family's security — is also American. Maybe Jasper is not just a bodyguard, but an American spy. And somehow this is all connected to Prince Robert's death — with Queen Helena being in on it. Oh, the intrigue!

Yeah, I may be going off the rails here with this theory, but it's E!'s The Royals — frankly, I'd be disappointed with anything less.