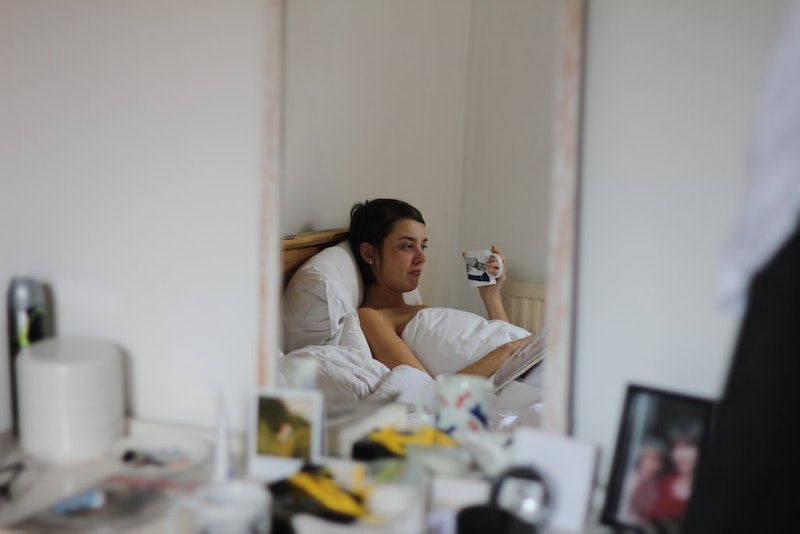 Fellow caffeinated humans of Earth: The world might not be ready for the honesty bomb I'm about to drop, and I respect that, but I'm not going to hold back to spare anybody's feelings. It is time for us to acknowledge a fact as ancient as time itself: Tea-drinkers are simply better in bed than any other kind of people. Don't insult yourself by asking me for the science behind this, because you don't need to see it in a fancy schmancy research paper to know, deep down in your heart of hearts, that this is the truth. I'm willing to possibly negotiate on the reasons tea is good for you or the many things that tea drinkers are better at in life, but we are undeniably the all-around champions in the ~sexytimes~ department.

I'd say "come at me" to you understandably defensive coffee drinkers, but I'm here to make love, not war. Just humor me for a second and think back on the last time you loved up on a tea-drinker. (But not for any longer than a second, K? I don't want you getting so hot and bothered you forget to read the article.) Let me guess: They rocked your world, right? You might not even be able to conjure up full images of the experience in your mind because you ascended into perfectly brewed nirvana while it happened and your mere human brain is incapable of holding a tangible memory of such an exquisite state. Just trust me on this. Between the psych degree collecting dust somewhere, my bladder incomprehensibly full of tea, and a strong conviction that I am right about everything ever, so help me God, I will fully reveal to you all the reasons why tea drinker are better in the sack (the bag?) than everybody else:

We appreciate a slow crescendo

Tea drinkers are inherently patient, and have a sixth sense for just the right moment that the tea is perfectly brewed for maximum pleasure, which, not incidentally, is the same way we know when you're perfectly brewed, if you know what I mean.

We are wildly passionate

Guys, there have been wars over tea. WARS. We do not take this stuff lightly. The Opium Wars between Britain and China, the Boston Tea Party. Time and again, we've proved that we don't just live for tea—we're willing to die for it. Are we crazy? Abso-f*cking-lutely. But you can't tame these wild tea stallions, and we're about to bring the war to the bedroom, baby.

STEAMING hot. We want it to be boiling, sizzlingly, ridiculously hot. We're not afraid of getting burned.

Our focus is entirely and wholeheartedly on YOU

An amino acid in both green and black tea reduces the stress hormone levels in the body, which gives us the focus of a prizefighting sex stallion. Our sexts will always be on point. Our moves will always be executed with determined (if not occasionally imperfect) drive. When we're through with you, you'll feel like you're the only person left in the whole damn universe.

We can go ~all night long~

I didn't just type that to get a song stuck in your head. I typed it because it's true, and for once, I have real person science on my side. Green tea increases muscular endurance, which means we never need to take a pit stop on the way to Happy Town. Also, tea is hydrating despite all the caffeine, which means that when the coffee drinking layman is too thirsty to go on, we'll only be thirsty for you.

And we'll be "bringing it" pretty much forever

Turns out drinking tea actually slows down cellular breakdown associated with aging. It's basically like drinking unicorn blood. While all the coffee drinkers in the retirement homes are taking their mid-afternoon naps, anyone who paired up with a tea drinker will be getting it on, immortal people-style.

Aw, man. You thought we were staring idyllically out the shop window daydreaming about white picket fences and flower hedges? Tea bag, please. We may be holding that mug of tea and looking as sweet as the sugar cubes we just dropped in it, but our minds are far and away to the stuff we are gonna do to you tonight.

You can’t resist our magic herbs

Some teas are natural aphrodisiacs, with roots that redirect blood flow straight to your happy parts. Get two tea drinkers together and they're basically like unstoppable sex-crazed MAGNETS.

We have the only post-coital snacks worth eating

Have a chocolate biscuit, sexy friend. You'll need any sustenance you can get after a tea drinker rocks your world.