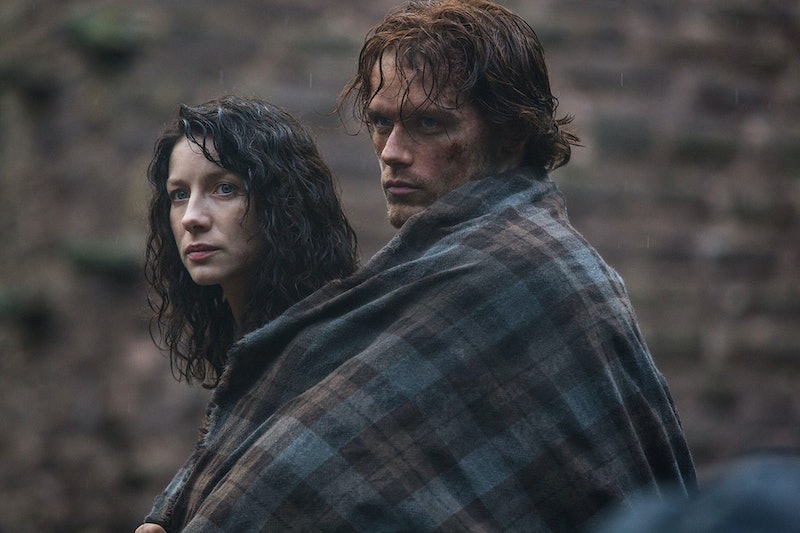 It's time to go back to the Highlands. After what has left like a forever hiatus, Outlander Season 1 part 2 premieres Saturday. Why the season was split into two halves so far apart beats me, but the important thing is that it's finally back. Considering the last episode left us on quite an intense cliffhanger, the return to Scotland can't come soon enough. Outlander is no doubt going to hit the ground running for its last string of episodes, and to prepare yourself for that, here's your quick Outlander Season 1 recap to get you back into the swing of things — not that you've forgotten anything about Jamie.

First, the basics: Outlander begins with Claire Randall and her husband, Frank, on vacation in Scotland following the end of WWII. She worked as a nurse during the war, and Frank was on the front lines, so this is the first time they've really been together in a while. Frank's trying to research his family — who happens to be from Scotland — so this sounded like a perfect second honeymoon for the couple. Too bad things don't go as planned.

The two of them watch a Druid ritual, and the next day Claire hears strange noises coming from one of the stones at the ritual. Naturally, she places her hand on the giant rock, and that's when she's transported back in time to 1743. She's taken in by one of the families in the Highlands, and taken to Castle Leoc. If you thought this was complicated enough as it is, just wait.

Claire's Now On A Quest To Get Home

Claire begins to desperate quest to get back to Frank in their present day 1945. She's taken to Castle Leoch, but the laird of the castle, Colum, believes that she is actually a British spy sent to watch them. Claire and Colum do not get along at all. At first Colum says that he'll send her on merry way, then he changes his mind and basically imprisons her as the castle's new healer (aka, their doctor. But they think she has magical powers). Claire is not having this at all.

Claire, trying to adapt to her surroundings as best she can, slowly starts forming a friendship — and later relationship — with the attractive, dashing, rugged, and handsome soldier, Jamie. They actually get married... but more on that in a few.

Claire's Got To Make Peace With The MacKenzies

There's a lot of family drama happening in the MacKenzie family. Colum is the laird (basically, a ruler, but not of royalty), and his brother Dougal is the muscle behind everything. Colum's got a crippling disease (Claire classifies it as Toulouse-Lautrec Syndrome) and that's left him very weak.

Long and the short of it about Dougal is that he's basically an ass. He's also gunning for Colum's spot as laird, makes advances towards Claire, and uses Jamie's horrific scars to scare villagers into paying their rent. He's also incredibly suspicious of Claire. He's not a great guy.

Know who is a great guy? Jamie. He's kind and caring, and willing to go way out of his way to help someone out — and that includes Claire. There's definitely something between the two of them right from their first meeting, and yes, they get married (But that's also partly because of Black Jack. But, you know, more on that in a few).

In an effort to protect Claire, who's all alone in this strange new land, Jamie marries her. Their wedding night is SUPER awkward, though, because Jamie has never had sex before and he's a little bit embarrassed by it, and so is Claire. Don't worry, though. They work it out.

Who's the real bad guy of this whole thing? Jonathan "Black Jack" Randall. First off, Randall looks strikingly similar to Claire's husband in 1945, Frank. That's because they are distant relatives, but Black Jack is downright evil. Upon his first meeting with Claire, he tries to rape her. He knows something is going on with her, and he's determined to figure out what it is. Claire and Jamie get married is to keep her safe from Randall, but it doesn't work — he still manages to kidnap her.

And what about Frank back in their present day? He's trying his hardest to search for Claire, but has basically given up all hope. He finds his way back to the Druid ritual stones that started it all, and through the space-time continuum, Claire can hear him calling for her. Neither one of them can get close enough to touch the stones, though.

Confusing enough for you? Just know Claire is good, Jamie is the typical knight in shining armor, Dougal is a jerk, and Randall is baaaaaaad. When the show picks up, we'll be right where we left off with Claire having just been captured by Randall — and Jamie suddenly appearing in the window, there to save her. Naturally. Let this crazy time-traveling adventure continue! Images: Starz; Giphy (4)

More like this
Here’s How 'House Of The Dragon' Diverges From The Book’s Timeline
By Allyson Johnson
Everything To Know About 'And Just Like That...' Season 2
By Jack Irvin
Does The 'Echoes' Ending Mean There Will Be A Season 2?
By Kadin Burnett
An Ultimate Guide To The Music Of 'Rap Sh!t'
By Brad Witter
Get Even More From Bustle — Sign Up For The Newsletter