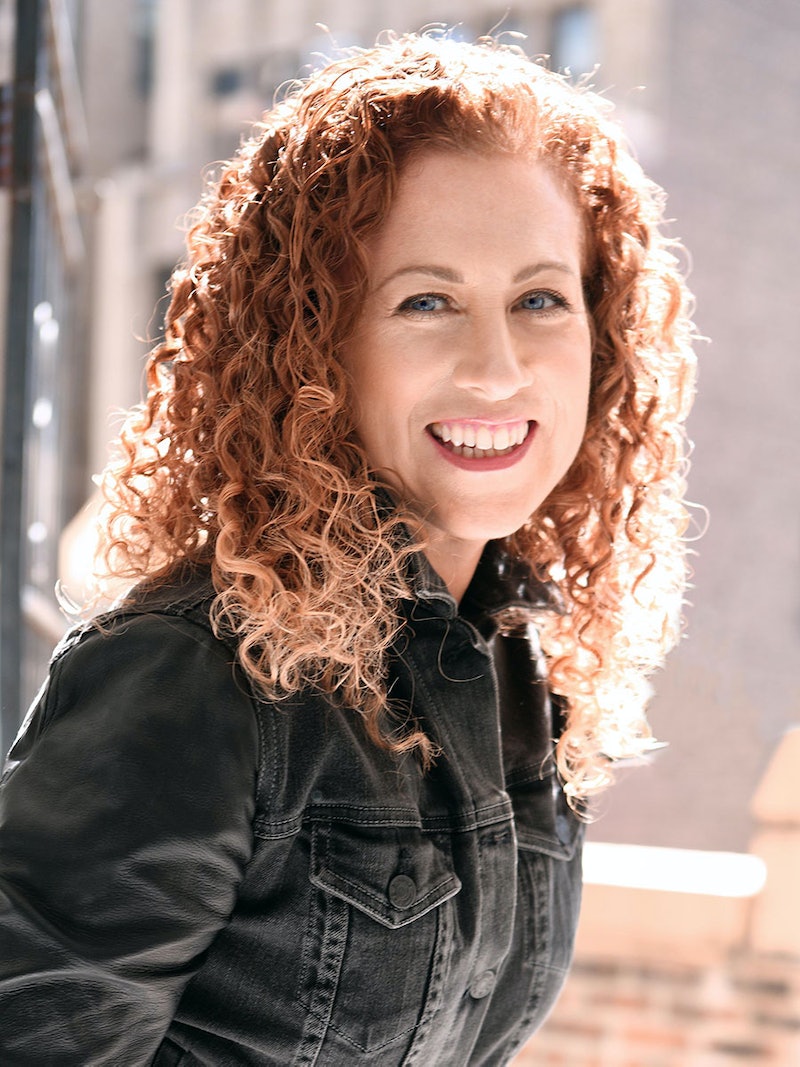 With 23 books by Jodi Picoult in print, fans of the author have a pretty good idea of what to expect from her novels: a dark subject — say cancer or domestic abuse; plenty of shocking twists and turns; and a conclusion that, while satisfying, may not be the happy ending of readers' dreams. Picoult can write a gripping thriller or an emotional drama for sure, but as for a sweet, happy story with a fairytale ending? No way.

Yet in 2012, the author decided to do just that, writing the YA, fantasy-based Between the Lines alongside her daughter, Samantha van Leer. On May 19, the duo are releasing the sequel to the bestseller, Off the Page . Clearly, Picoult's gear-switch paid off — but what caused it in the first place?

"My books are not often fun," the author says, bluntly. "[Writing Off the Page] was a really lovely break for me... I mean, who doesn’t want to take a little breath and watch that for awhile instead?"

Turns out that taking a break from her usual dark dramas works well for Picoult. Both Between the Lines and Off the Page are charming stories bound to please teen readers. It wouldn't be surprising if the duo continued their work together and made YA a career focus — yet according to the author, that's unlikely to happen anytime soon.

"Part of the real joy of writing YA is doing it with Sammy. I have a blast working with her," Picoult says. "But I don’t know that I would’ve [written YA] without her."

Adult fiction will remain Picoult's focus; after all, it's the genre that made her a bestselling author and a household name, the rare writer who's guaranteed to top the charts and win raves with each new release. With a new book nearly every year — and long ones, at that — Picoult, over the course of her three-decade long career, has become one of the country's most dependable and respected authors. As she writes one novel, she's already planning another — or, as she did during both Between the Lines and Off the Page, actually writing both at the exact same time.

"All times that I’ve been working with Sammy, I’ve always been in the middle of an adult book as well," she says. "When I wrote Between the Lines, I was switching back and forth between writing a fairytale and writing about the Holocaust — I don’t think you can get more diametric."

And during Off the Page, she was researching material for her next book, a novel about a white supremacist — a "nice companion study," she says dryly. She admits that the constant switching — she's even doing it now, writing the new work while co-writing a play based on her two YA books — gives her "whiplash," but, as one might expect, she's not one to back away from a challenge.

"It’s a constant compartmentalization in my brain — what am I writing today?" she says. "It's tough to flip back and forth, but hopefully, it’s keeping me on my toes."

"All times that I’ve been working with Sammy, I’ve always been in the middle of an adult book as well. When I wrote Between the Lines, I was switching back and forth between writing a fairytale and writing about the Holocaust — I don’t think you can get more diametric."

It helps that while the tones and storylines of her YA and adult books vary, the themes are actually similar; both Between the Lines and Off the Page deal with love, heartbreak, and consequence, and, in the latter novel, mortality — perhaps Picoult's most associated subject — plays a major role in the lives of the characters.

"I’d like to think that the readers who started with Between the Lines and were really young can grow through Off the Page," she says, "It's slightly more mature... the idea that we explore in this book is that in fairytales, love is pretty easy — you get that four-step process to your happily ever after, and this one shows that love in the real world is messy and it’s hard. It’s possible, but it doesn’t get given to you. You have to fight for it."

"It’s very real," she continues. "It’s the things that are scary to young adults: what happens when you grow up and things change?"

As any Picoult fan knows, the author is familiar with how teenagers work. The mother of three children, Picoult has frequently included young protagonists in her fiction, perhaps most memorably in 2004's My Sister's Keeper . Much of her interest in adolescents comes from her tenure as a high school English teacher, a time she credits with giving her insight into the minds of young adults.

"I love to write in the narrative voice of a teenager," she says. "If you have a teenage narrator, everybody else has to be honest, because teenagers will call you on BS all the time."

Picoult hopes that some of the young fans of her teen-oriented books will gradually move on to her adult ones over time.

"It would be really cool to have them start with the YA book and transition to a book like My Sister’s Keeper or Nineteen Minutes as they’re growing up," she said. "That’s really my goal."

That said, the author is more than happy to have fans who aren't yet ready for her more advanced novels, strong readers who, she says, "deserve well-written fiction that’s compelling," but may not be quite mature enough to tackle the heavier subjects she covers in her adult books. She's also thrilled for the reverse, longtime readers of her novels who are now delving into her contributions to the younger genre. Adult women, she notes, are the fastest growing group of YA readers, and the massive success of the genre is due not solely to its teenage fans, but their parents, as well.

Yet although Picoult is certainly appreciative of her popularity, she's more concerned with replicating it with other female authors. She famously made headlines in 2010 when she and fellow writer Jennifer Weiner called out The New York Times for paying far more attention to the works of Jonathan Franzen and similar "white male literary darlings" than female writers, citing the paper's imbalanced gender ratio in authors reviewed; in 2010, the Times reviewed 524 books by male authors compared to just 283 books by women. Many tweets, op-eds, and impassioned arguments (most, unsurprisingly, by Franzen) followed, but unfortunately, not much has changed, and sexism in the publishing industry is still as rampant as ever. Four years after the 2010 study, the percentage of Times' reviewed female-written books had gone up just 6 percent.

"Both Jennifer and I stated a fact, which is there are more reviews of male writers than there are of female writers, period," says Picoult. "Sometimes it’s very easy to shoot the messenger, or pretend the messenger is being cranky because the messenger wants relevance, but that’s really not true in my case or Jen’s case. We’re both really happy with our careers and our readers and our fanbase. We are the first people to tell you that we write commercial fiction and we love doing it... all we are doing is trying to use the readerships that we have to illuminate a valid problem in publishing, of gender discrimination."

"Honestly," she adds, "if you take away all of the comments, all of the fluff, all the media hype, all of the catty snarkiness, what remains are the facts. That’s it. I’m not saying anything that hasn’t been proven."

"We are the first people to tell you that we write commercial fiction and we love doing it... all we are doing is trying to use the readerships that we have to illuminate a valid problem in publishing, of gender discrimination."

With nearly five years having passed since that tweet, Picoult is tired of hearing about the supposed "feud" between her and Weiner and writers like Franzen and Jeffrey Eugenides — "it gets brought up because it's exciting for publishing," she says, bluntly — and is clearly irritated at the media's unwavering interest in it. Yet she's far from done discussing the subject of sexism itself, and, along with Weiner, has no intention of stopping her advocacy for her fellow female writers anytime soon.

"Jen isn’t bad-mouthing anyone," Picoult says. "She’s just saying hey, I’m really lucky, I do have great reviews, and I do have great readers, and there are a lot of women who are not as lucky as me, so could you notice them? And I think that's a really generous vantage point."