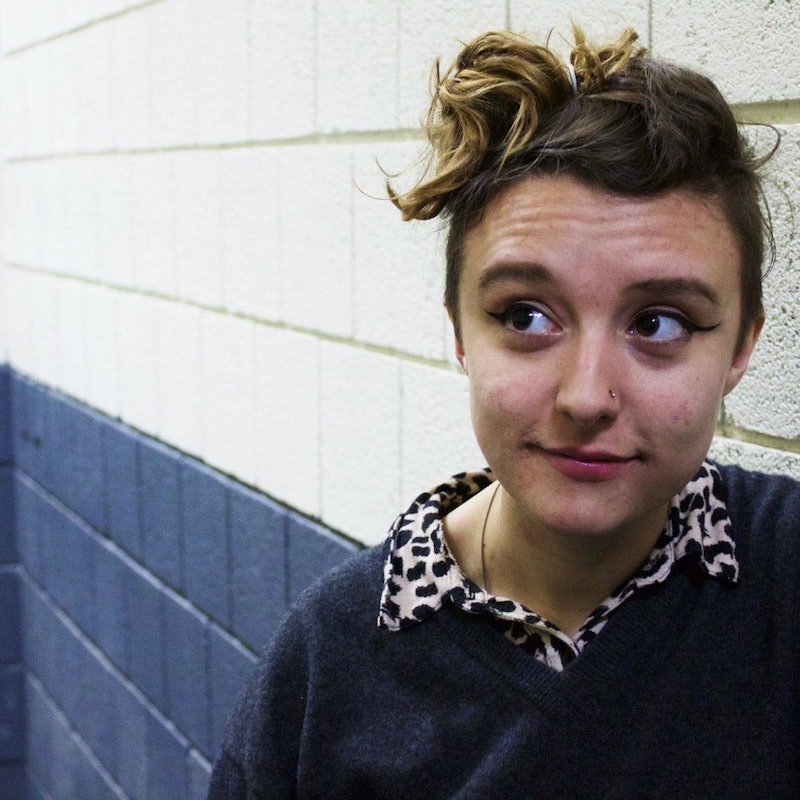 I bought my first eyeliner when I was in eighth grade. With money given to me by my mom, I purchased an Almay Charcoal Pencil in black from our local drugstore in the hopes that it would transform me into a woman. Or at least upgrade me from awkward eighth grader to hot high school girl. Looking back, I’m aware that I applied it too heavily and that it wasn’t an ideal product, since charcoal pencil tends to smear and fade quickly off of my more oily skin. But at the time, it meant so much to me.

All my friends had started wearing makeup in sixth grade, and they continuously mocked me for not joining the herd. At the time, I was too absorbed in doing well in school and working out my feelings about my sexuality that I never got too concerned about makeup. If anything, I was opposed to it and rejected anything remotely feminine during these formative years. My friends only knew how to talk about chasing boys and trying out new makeup, while I just sat in the corner drawing on my Converse and wondering if it was normal to want to kiss girls.

By eighth grade, I decided it was better to fit in, so I went ahead and bought the eyeliner. And it felt so good to fit in — to be wearing makeup like I “should” be. The whole thing was seriously uncharted territory, and being able to hide behind the eyeliner alone was enough. That smooth silver pencil was powerful, but ultimately too powerful. Rather than possess any superpowers, the eyeliner ended up controlling me to the point where I couldn’t feel beautiful without it.

(A webcam photo I took in sophomore year after a particularly successful wing execution.)

Fast-forward five years to my college freshman self, whose hours spent at Sephora stores and cosmetic websites resulted in a vast collection of makeup (and all of which I knew how to use). Makeup was no longer a mask for which my flaws could hide behind, but rather a means by which I could express my creativity and identity.

I tried eyeliners of every color in cream, gel and liquid. Long gone were the days of drugstore charcoal eyeliner. I was determined to find the perfect one, and my makeup bag (which by now was pretty huge) included everything from Stila to Marc Jacobs. But I didn’t stop there. Straying from my much-loved eyeliner, I began trying all kinds of foundations, luminizers, bronzers, eyeshadow palettes, mascara and lipstick. Around this time, I had become a sexually active young adult, and the big questions of who I was and what I liked became all-consuming. I saved the bolder beauty looks, the looks I preferred, to myself. My winged eyeliner, which took hours for me to perfect, never left the confines of my bedroom.

In sophomore year, I came out to my family and friends. With both public and private ownership of my identity came the urge to be bold. I no longer had anything to hide. I started wearing dark and crazy-colored lipstick. My winged eyeliner made its debut, and I gradually drew the wings longer and wider. Was this for lack of skill and inability to draw a symmetrical face of makeup on the first time around? Or was it to make a loud (and then even louder) statement with my eyeliner? Probably a little bit of both. Either way, I was owning who I was and raising the volume of my statement through my voice and through my makeup. Putting on makeup was no longer an act of hiding behind synthetic creams and colors. It became a political statement — a message to the world that I know exactly who I was, and that I no longer wished to be silenced or overlooked. My face became a safe space for identity expression in a world full of unwelcoming and queerphobic spaces.

(A photo of me from this year taken by my partner.)

It’s so important for women and queer-identifying people to claim their power and speak their truth, and makeup is a perfect tool for doing just that. Unfortunately, many beauty ads and the American media in general have always forced us to feel inadequate and anxious about our appearance. But the very same products that are sold to us by power-hungry and uncaring corporations can be used for good — as weapons of empowerment. They are not oppressive tools, or masks to hide behind, if we don’t want them to be.

Personally, my winged eyeliner is still not as perfect as I’d like it to be. Almost every time I put it on, my uneven application forces me to wipe it off and start again. I still haven’t found the “perfect” eyeliner either. But that’s the beauty of makeup’s power, and of fluid queer identities. You have the control to say and be what you want confidently, while your identity is constantly being crafted and revised. My wings may not be perfect, but they make me feel like a valid human being who deserves to take up space and make noise. And that’s what I love the most about makeup: its powers. No, it doesn’t have to be your kryptonite or your downfall. That purple lipstick you love to wear to the club? And that liquid eyeliner that makes you feel absolutely invincible? They’re your secret weapons. Use them wisely.