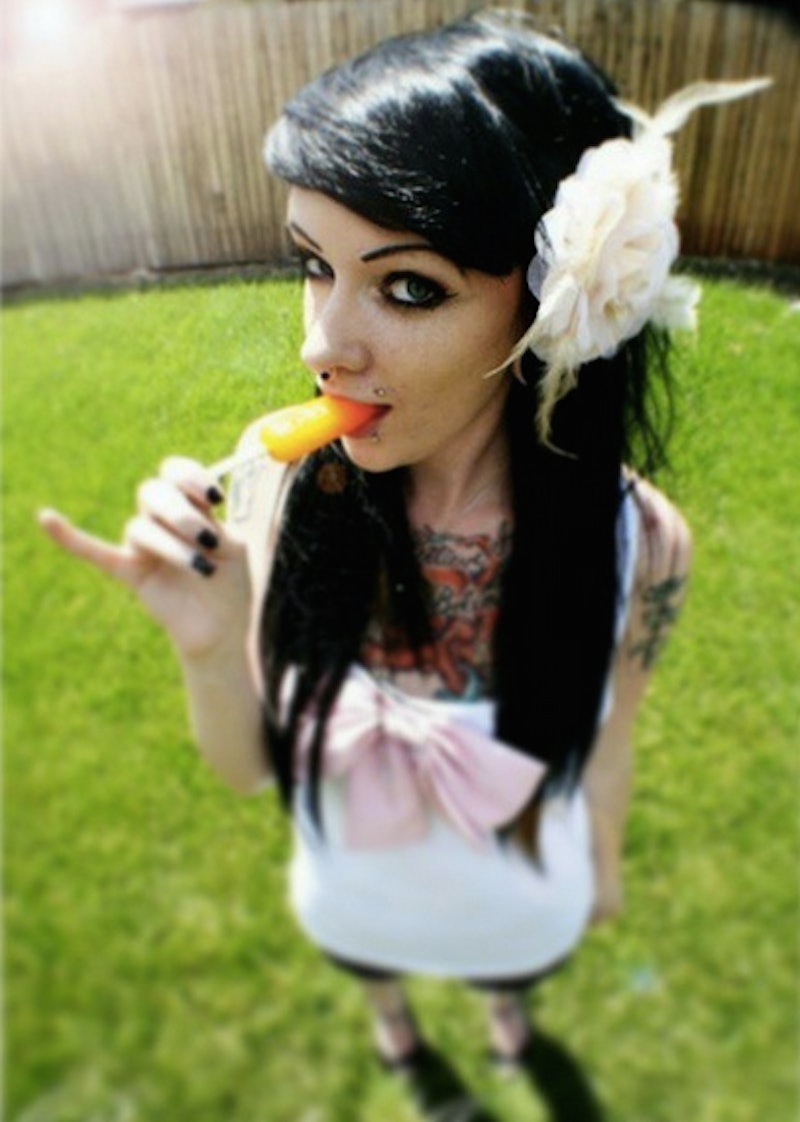 In light of Paris Hilton’s recent admission that she has a closet stock-piled with Juicy tracksuits, I have a confession to make: I still have one drawer devoted to staunchly mid-00s attire representative of what I like to call "MySpace Fashion." In the time before smartphones and front-facing cameras, there were flip phones and mirror selfies that called for a particular, distinctly MySpace aesthetic. I can't say that I was aware of it happening when it happened, but opening up that one drawer and looking back on everything, I (and pretty much all of my friends) definitely dressed in a style entirely indebted to the OG of social media sites.

Now, key to MySpace fashion was the rise of '00s emo music, a genre that seemed to maintain a sort of symbiotic relationship with the platform — discover the music on MySpace, love the music, go back to MySpace to find more. As such, I think it's fair to say that MySpace and emo fashion go hand-in-hand, that those mirror selfies were heavily influenced by the bands at the forefront of the genre. So when I'm talking MySpace fashion, I'm talking something distinct from the general '00s wardrobe. MySpace fashion meant looking as though you just got home from Warped Tour, like you just stepped out of an early Fall Out Boy video, like you could pose for the Hot Topic or Hollister catalogue at the push of a button. As the first generation to live their lives online, original MySpace users have the distinct pleasure/torment of reliving past fashion choices, and chances are they weren't always the best.

In the MySpace universe, the only thing better than a mirror selfie was the Photo Booth upload. Choose the latter, and your hair game had to be on point. This meant lots of dye (preferably black, maybe bleach blonde or some other unnaturally bright color) and lots of styling. When it came to styling, it seems as though the only option was to flat-iron each and every strand, paying special attention to the oh-so-important Emo Bangs. Slicked to the side while simultaneously covering half of a face — or at least one eye — Emo Bangs were the integral first step in composing the perfect MySpace ensemble.

"I've told you time and time again, you sing the words but don't know what it means to be a joke and look, another line without a hook." — "I'm Not Okay," My Chemical Romance

MySpace fashion is not something defined by subtly. Case and point: Eyeliner. Always black and always applied pretty much by the stick, eyeliner certainly proved the most important makeup product for any MySpace kid, boys included. Who could forget the cultural obsession with "guyliner" made popular by frontmen like My Chemical Romance's Gerard Way? Like all things on this list, the trend is certainly a bit dated, but if I'm being totally honest, I still use MAC Eye Kohl in Smoulder to this day based solely upon Pete Wentz's mid-00s recommendation.

"Just for the record, the weather today is slightly sarcastic with a good chance of: A. Indifference or B. Disinterest in what the critics say." — "London Beckoned Songs About Money Written By Machines," Panic! at the Disco

Along with makeup, skinny jeans also adhered to the unisex styling of MySpace fashion. Guys wore girls' skinny jeans and girls wore, well, they wore even skinnier girls jeans. If your pants didn't look like they were painted on, then they simply weren't tight enough. MySpace skinny jeans defied logic, appearing way too tight to breath, let alone walk in. Like the hair, the jeans were best if in all black, preferably with pre-ripped rips at the knees. But, of course, any vibrant print or all-over pattern proved just as profile pic worthy — so long as, of course, the jeans were super, super skinny.

"We're the kids you used to love, but then we grew old." — "Sophomore Slump or Comeback of the Year," Fall Out Boy

If skinny jeans were the standard MySpace fashion bottoms, then hoodies were the standard top. Whether fresh from an American Apparel bag or torn and frayed, a cool hoodie expertly completed the stuck-in-my-parents-house look intrinsic to MySpace fashion. Probably the most conventional of style choices to complete the MySpace look, the hoodie nonetheless provided the perfect opportunity for a statement, be it with a bright color or with a back emblazoned with logo of your favorite band. (Plus, your profile picture looked way cooler when you had flipped your hood up.)

"Cause I hate the ocean, theme parks and airplanes, talking with strangers, waiting in line." — "Everything is Alright," Motion City Soundtrack

Like the goth and punk trends that came before it, emo — and in turn, MySpace — fashion included lots of extraneous face piercings, be it on the lips, eyebrows or nose. But of chief popularity on MySpace pages, however, seemed to be gauge and septum piercings. Not for the faint of heart, septum and gauge piercings (where "gauge" refers to the instruments used to gradually increase the size of an initial earlobe piercing) definitely declared a devotion to an alternative fashion, in this case one that happened to originate, thrive, and live online.

Unlike Paris Hilton, I don't plan on breaking out my throwback outfits anytime soon, but I think we both share a certain unabashed pride in our ghosts of fashion past. Just like the music that inspired it, looking back on MySpace fashion provides a certain kind of nostalgia, one admittedly tinged with a bit of embarrassment, but that nonetheless leads to some defining teenage memories.