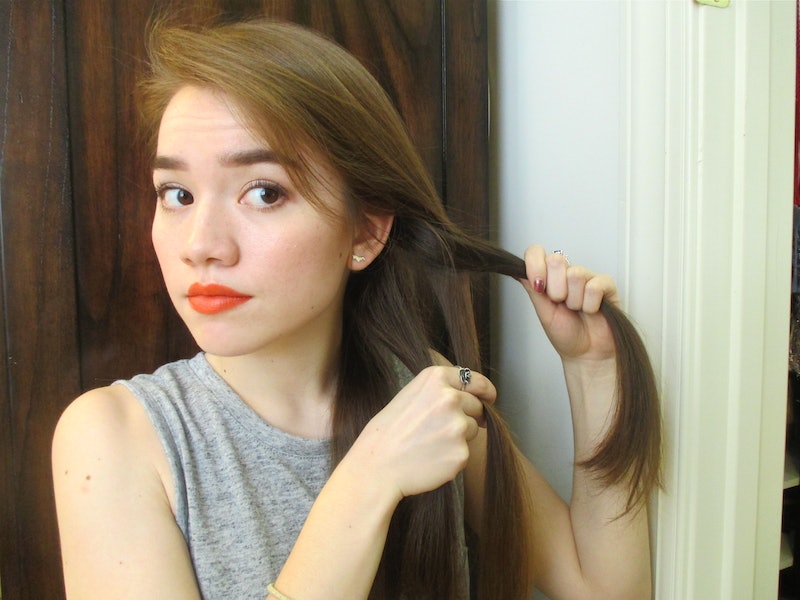 I'm pretty lazy when it comes to hair, so any style that appears to be more difficult than it actually is, is always a winner in my book. That's where the four-strand braid comes in. It's much like the fishtail braid in that it looks like a chicer cousin to the traditional three-strand braid, but is just as easy to master. Of course the technique is slightly different, but with a little practice, you'll be plaiting this bad-boy in your sleep.

Although all braids are a sort of weave, if you're familiar with the traditional process of weaving, the four-strand braid should come pretty easily to you. Although this particular weave is not quite textbook with right angles and what-not, the basic principle of interlacing strands comes into play. That is, each section of hair will follow a more obvious over-under pattern to link all four together. And once you have this method down, who knows, maybe a five-strand or even six-strand braid will be in your future. But I'm getting ahead of myself. If you're ready to take your braiding-game to the next level, here's how to master the four-strand braid:

2. Move Section One Under Section Two

Start weaving by moving section one under section two, so that section two is now on its left and section three is on its right.

3. Move Section One Over Section Three

Continue weaving by moving section one over section three, so that section three is now on its left and section four is on its right.

4. Move Section One Under Section Four

Repeat this weaving process, continually bringing the outermost section closer to your head by weaving through the other three sections. If it helps, you can rename each section before you start a new row, so that you're always moving one under two, then over three, then under four.

Show off your braid a little better, and give it more volume by gently tugging at it. Et voila!

More like this
The Best Beauty Looks From The 2022 BET Awards
By Audrey Noble
Why Sarah Jessica Parker Wanted Fans To Stop Calling Her Hair Choice “Brave”
By Brad Witter
How To Protect Your Scalp From The Sun, According To Derms
By Paris Giles
15 Summer Hairstyle Trends That'll Inspire Your Next Chop
By Paris Giles
Get Even More From Bustle — Sign Up For The Newsletter