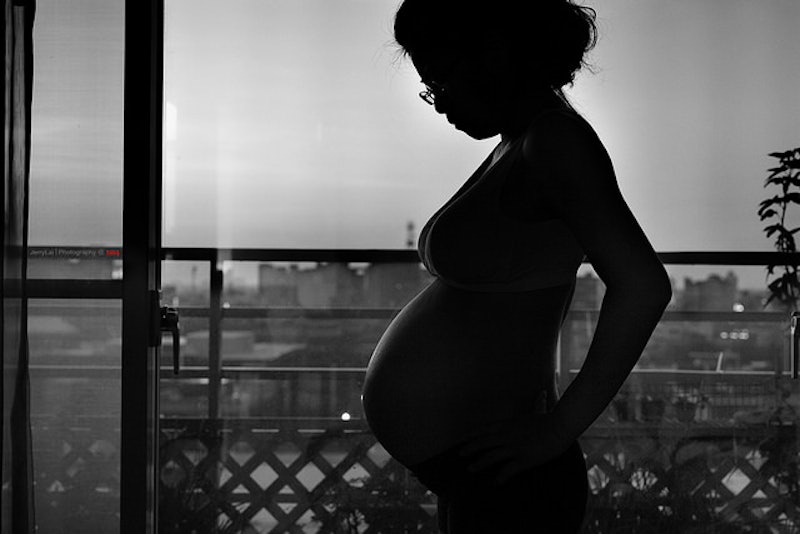 I've been asked "Why did you have two kids with your husband if he was abusive” many times before, and it is a question I still don’t know how to answer — not for the person asking it, and not for myself. Although I want to believe they are asking out of sheer curiosity, the tone some people use makes it hard to feel as if it’s anything other than an accusation.

Why did I have two kids with a man as abusive as my ex-husband? What right did I have to bring two children into a situation that I myself was having trouble surviving?

I hate those questions and yet I get them regularly. I run a nonprofit that serves abused women, and because of that, the topic of my abusive ex comes up quite often. When people — mostly people who have never been abused — find out that he was physically and emotionally abusive towards me for the duration of our ten year relationship, they can't understand why I now have two young children, and so they ask. They are asking because they could never imagine having done what I did, and so, instead, they judge. They assume that the abuse must have not been that bad, or they decide that I was just selfish.

My marriage was doomed from the beginning. At just 18 years old, I ran into the arms of a much older boyfriend and soon accepted his proposal to make him my much older husband. Even as I walked down the aisle, my reservations about the entire situation resonated loudly in my heart. But compared to the abusive and neglectful childhood I was leaving behind, I was naive enough to think that anything I was walking towards would be better than everything I was running from. Despite the fact that there had already been some serious warning signs of what was to come, I convinced myself that after we got married, things would get better.

He raped me on our wedding night, and the abuses I suffered at his hands were a constant and daily occurrence in our marriage.

I’ll never forget seeing two pink lines on the pregnancy test; not because I was overcome with joy, but because I was overcome with terror. I will also never forget sliding down the bathroom wall until I was all but slumped on the floor, knees pulled up tight against my chest, lungs screaming for air, and my heart pounding with fear. Fear for myself, fear for my unborn child, and fear for the road ahead of me; the road ahead for both of us.

Two pink lines. A baby. A baby I wasn’t sure I was ready for, a baby that was coming anyways.

I wasn’t sure how I was going to get us out of this, but for me, the fact that there was actually an “us” to think about gave me strength.

So why did I choose to bring two kids into a marriage I was barely surviving myself? I guess the answer I would give is this: “how could I choose not to?” I could have had an abortion; people have abortions all the time when they get pregnant with babies that are going to be born into rough situations. But I never could have.

While I pass no judgment on other people's decisions, abortion was never an option for me. As I looked down at my belly full of life, I knew nothing about what would come of our situation — except that I would love her. I would love her in a way her father wouldn’t, and I would protect her in every way that I could, because not only did my womb encase her, but because my heart did as well. It was my baby — my daughter, as I would soon learn — and I wanted nothing more than to protect her.

If you would have asked me back then if I was happy about being pregnant, I would have given you an exuberant “yes!” On the outside, I was glowing with the prospect of new life, talking about my excitement to anyone who mentioned my pregnancy, setting up a nursery, blissful about the whole thing.

Yet deep down, I knew that I was lying — not only to everyone around me, but also to myself. After growing up in abusive household, I was never quite sure if I even had the ability to be a "mommy," yet I held out hope that one day when the time was right, things would fall into place. But this — this was not what I had envisioned.

Love makes us do crazy things. It drives us to persevere when we don’t think we can, and to push forward even when we don’t even know where we are going. I was scared, but more than scared, I was overcome with love for my child.

I didn’t think everything would be OK, and I knew that everything would not be fine once I had my baby. I wasn’t sure how I was going to get us out of this; but for me, the fact that there was actually an “us” to think about gave me strength. My love for the life growing inside of me far outweighed the fear that I had of creating it.

I would love to say that with the birth of our daughter, my husband changed his ways and became the husband and father he should have been. But In fact, things got worse. I tried to leave — but it seemed like the harder I fought to get out of my marriage, the more trapped I became. Despite what people might think, leaving a domestic abuse situation isn’t as simple as moving into a shelter. Without any money of your own, a college education, a career, family support, or a legal divorce — and without the self-esteem to believe in yourself — it's anything but easy to leave. And so, I stayed.

Three years later, that question of leaving was further complicated when I gave birth to a son. I get judged a lot by people who don’t understand how or even why I would have become pregnant in the first place. But unless you have lived it, it’s hard to understand domestic abuse, and the control an abuser has over your life — the sabotaging of birth control, and the rapes that occur behind closed doors under the guise of a “marital requirement."

Me? I was just trying to survive a life I never expected to be leading.

So yes, I bore two children into an abusive relationship, and many people can’t understand why I did that. I would love to give you a simple answer that would help you understand the choices that I made.

But truth be told, I don’t have that answer and that’s OK. Because this is not about what anyone else would have done; this is about what was right for me and my children.

Survivors are often held to an unspoken standard — the assumption that they will look a certain way, act a certain way, and make certain choices — and that's crap. I was and never will be what people consider the "perfect" victim. I wasn't quiet and I didn't act downtrodden. In fact I was loud, outspoken, and the life of the party. I was still myself. When my husband would hit me, I rarely cowered. I didn't hit back, but I didn't back down. And to many people, that's not how they envision a "real" victim acting.

To many people, survivors should act a certain way: they are broken women, cowering in the corner while trying to salvage their lives. In their judgmental eyes, a survivor isn't supposed to have a unique self; their entire identity is that they have been abused.

And any deviation from that script — from refusing to stay down after my husband hit me, to birthing my children into an abusive relationship — means that the abuse must not have been that bad. The truth is, he was killing me. And I decided that if he was going to kill me, I was going make it happen on my own terms. I was grasping at anything I could to find my voice in life and alot of people just can't seem to wrap their heads around that.

Today, I'm not destroyed. My ex broke me no doubt, but I will not allow him to steal anymore of my life. I speak out about my life and about my past. I'm the author of a blog about recovering from abuse and I'm a public speaker for my nonprofit. And the more I speak out, the more shocked I am at how people perceive me for not acting the way they think a victim should.

I spent a lot of my life letting someone else control me — and I refuse to let society do that now by judging the choices that I made. I refuse to let anyone tell me how I should act now that I'm free, or judge me on the choices I made to get here. Just because I was vulnerable, that did not mean that I let go of all of my strength, or surrendered every aspect of the things that made me who I am.

I became a single parent three years ago after finally escaping the grasp of my now ex-husband. My children are now three and six, and out of all the choices I have ever made, the decision to allow them life is the only one that I know for certain was right. Every day is a struggle, every day is a blessing.

There are a lot of questions in my life that will forever remain unanswered, choices that I will forever be judged on, and things that I will always regret. But the one thing I have never doubted, never questioned, was bringing two lives into this world. Two lives that I can’t imagine living without. Two lives that were the result of the best choice I have ever made.

I didn't fight the way anyone else would have, I fought the way I needed to — for my kids, and for my life.