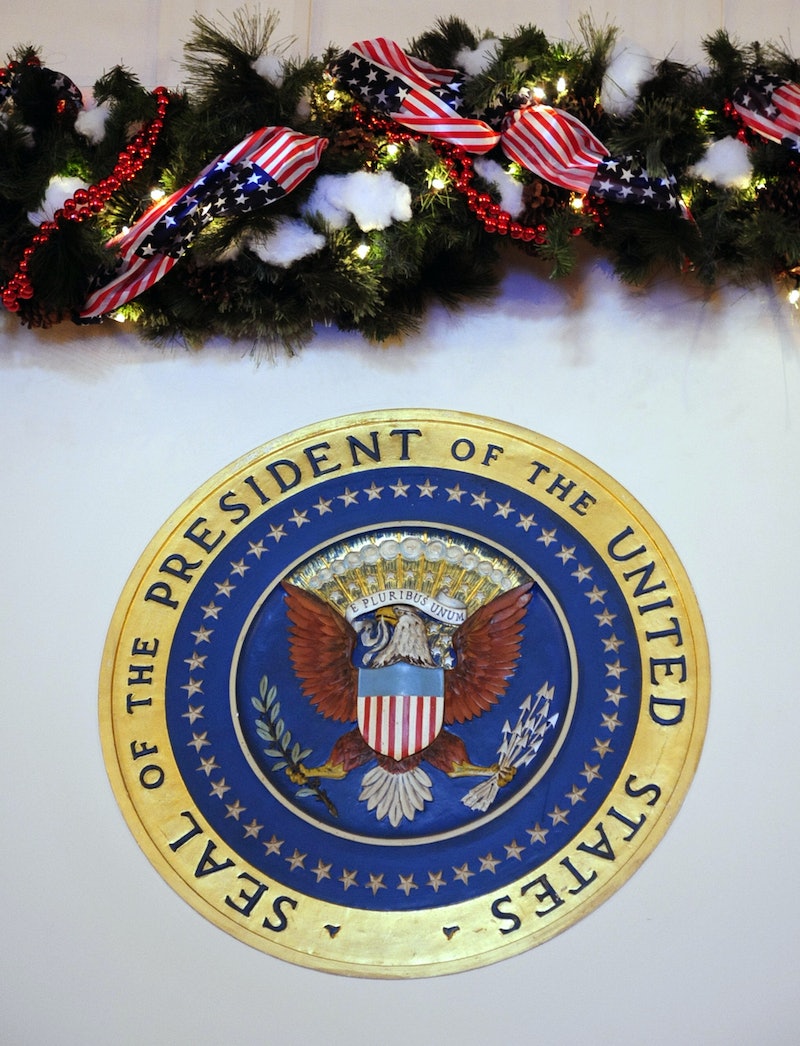 Now that Hillary Clinton has finally announced her campaign for president, the clock starts ticking on what could be a landmark moment in American history: If elected, Clinton would become the first American woman to serve as Commander in Chief. It's more than a little surprising that in 2015, the U.S. still has not had a female president; When you think about it, there's really no good reason why it hasn't happened yet. Women are inherently at least as capable as But as we are all aware, the Oval Office is not the only place where women are still playing catch-up to men: A recent report from the Pew Research Center examining why there are so few women in business leadership roles, reminds us that only 20 percent of U.S. Senators are women, and only 19 percent of the members of the House of Representatives are female. There are only six women governors. American women only got the right to vote in 1920, and still make only 78 cents for every dollar earned by a man. So clearly, there are plenty of reasons why it's way past time for the U.S. to elect a woman president. There is nothing in the Constitution that states the president has to be a man (although the language uses male pronouns throughout), and it's hard to deny the viability of a candidate who has served as both Senator and Secretary of State, regardless of their gender.

In addition to the legal reasons why it's way past time for a woman to assume the Highest Office In The Land, there's plenty of evidence to suggest that electing a woman president of the U.S. simply makes good sense.

Yet another report found that of 3,000 studied, companies with women in high-ranking positions performed better, including better stock performance. It just makes sense that diversity leads to better outcomes for companies, whether that's by way of including more women or minorities. It stands to reason that putting a women at the helm of the Executive Branch could potentially bring with it some of the same benefits that bless women-lead companies in the private sector.

Legislation Important To Women Would Get More Attention

Whether or not you believe there has been a war on women by the right wing, women's rights have definitely suffered some major setbacks over the past decade. In 2014 alone, we saw the elimination of buffer zones at abortion clinics, and a Supreme Court ruling that allowed Hobby Lobby and other small companies to deny birth control coverage for religious reasons. Hillary Clinton has a long record of advocating for the role of women in public discourse, and having her in the White House would be a huge victory for the rights of women, not just for women in politics. She told The New York Times in 2009 that society cannot progress until women are treated with equality.

I happen to believe that the transformation of women’s roles is the last great impediment to universal progress — that we have made progress on many other aspects of human nature that used to be discriminatory bars to people’s full participation. But in too many places and too many ways, the oppression of women stands as a stark reminder of how difficult it is to realize people’s full human potential.

We Could Use Better Examples For Fictional Female Presidents

The fantastic Julia Louis-Dreyfus as Selina Meyer in "Veep" is just the latest fictional portrayal of a female president of the U.S. Geena Davis played president Mackenzie Allen in the short-lived TV series "Commander in Chief," and Cherry Jones was President Allison Taylor on "24." But other than those three TV presidents, it seems many portrayals of women in the Oval Office are less-than-flattering, as a roundup on The Nerve pointed out: Either they're ditzy, harried by kids and husband, or totally incompetent. Wouldn't it be nice to provide TV and movie writers with a good example to follow for their next fake female prez?

Angela Merkel has been Germany's Chancellor since 2005, and she's hardly the only woman who is at the head of her country's government. During her tenure, Germany's economy has become one of the most powerful in the world. In addition to Merkel holding the top job, Cristina Fernandez de Kirchner has been president of Argentina since 2007, Dalia Grybauskaite was reelected to a second term as Lithuania's president in 2009, and Dilma Rousseff has been Brazil's president since 2011. Back in 1979, Margaret Thatcher made history as the UK's first, and so far only, female prime minister, serving in the top job until 1990. Maybe it's time the U.S. catches up to the rest of the world, already.

If Clinton were elected, it would be a big step toward making it less unusual to see women in positions of authority in Washington and other parts of the country (and hopefully the world). Women candidates wouldn't have to field stupid questions about why they're running as a woman. The more women who hold office, the less anomalous it seems. Clinton, if elected, would bring a long list of skills and qualities to the office that have nothing to do with being a woman—but the simple fact of having a woman in the office would go a great distance towards normalizing the ideal of women in positions of leadership. Then, finally, we could see an end to the hot takes about whether the country is ready for a female president. That shouldn't be the question, instead, we should be asking: Which woman is going to be president next?

More like this
Scotland's First Period Dignity Officer Is... A Man?
By Darshita Goyal
Dunkin’s Pumpkin Spice Latte Is Officially Back This Week
By Mia Mercado
Kim Kardashian Is Releasing A Line Of Earbuds With Beats
By Alexis Morillo
"The Sachel" Is The New Haircut To Know Now
By Justine Knight
Get Even More From Bustle — Sign Up For The Newsletter