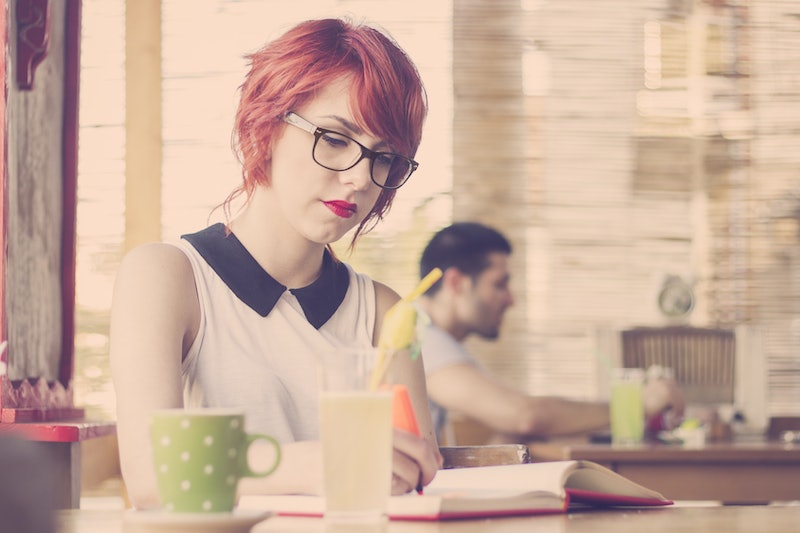 To you, the woman who doesn’t hold herself back. To you, the one who has learned "how to love yourself." You take up so much space; it makes people uncomfortable. You smile too freely, you laugh too loudly, speak too quickly, and enjoy your own companionship too entirely. To yourself, you are loyal. To yourself, you’re friendly and you’re loving. You honey your words when you speak to your reflection, admiring the woman you’ve been struggling to become. You’re not there yet, but you’re closer than you were before. You’re honest about your muchness: You walk around defenseless, vulnerable, but without your armor, you’re stronger. You’re open. You're courageous enough to be yourself in a world that’s eager to tear down anything that’s outside of normal.

To the woman that likes who she sees in the mirror, smiling at the messy-haired sleepy-eyed person greeting her good morning. That frizzy hair, the too-round face, don't bother you much, though it seems everyone says they should. But you don’t get it; who are you to punish yourself over a few rogue hairs when your eyes are that bright and there’s so much light fighting to get out with your smile? You concern yourself with other things.

To the woman who likes both her lines and her curves. To the one who doesn’t mind if her hips have edges or her thighs are full. You know you're meant to be worried over the way your legs look in a skirt, but when legs like yours have carried you through days and moments like you have had, a person wouldn’t have the heart to look at them with anything less than fondness. They carried you across weekend trips to crowded beaches, where you ran across hot sand and kicked through cold, blue water. They folded underneath you during breakups and crying jags, keeping the blanket snug around you. They saw you through dance parties where the room crowded with a kaleidoscope of lights, and they carried you to and from morning train rides, helping you slowly build your dreams. You’d never pinch its thigh or frown at its calf, because there’s nothing but gratitude.

To the woman who refuses to give up on herself, even though many ask her to try. To the one who won’t quiet down her heart, but wants to share herself with the world. She writes her name in the clothes she puts on, the loops of the letters and the lines of the consonants shown in the eccentricities of her dresses, in the patterns of her sweaters. She attracts curious stares when waiting on the platform of her train, catches confused questions in the brown eyes of strangers. But isn’t deterred. To the woman who is brave without knowing she’s brave — keep sharing yourself, even when no one seems to want you. The world is fickle, and for every five naysayers, there’s one of us quietly appreciating your panache. You inspire, and you delight.

To the woman who is too much: who feels too much, wants too much, needs too much. To the woman that knows she can’t change the world right away, but she can create a space in it that will make her happy.

To the woman who chooses herself. To you, the one who has learned how to be compassionate towards yourself. Who chooses to see the freckles running down her chest and remembers drinking champagne out of soda cans on the beach on a hot July day. Sees the lines around her eyes and remembers all the times they closed shut at dark restaurants as she laughed too loud over wine. Or all the times they fell closed when they became too heavy with tears. She sees how her thighs touch and sees only fullness, rather than lacks. No lack of beauty, no lack of self control, no lack of living.

All of our lives, we’re taught to make ourselves small. Shh, don’t attract attention to yourself, don’t take up so much space. Shrink, don’t make waves. But you — your smile is unapologetic. Your eyes, demanding. Not for something in particular, but rather, for the world to let you grow. You know you make sound choices. Just because words on a page or a mother tells you that this isn’t who you should be, you take it with a grain of salt. Thank you for letting me know, you smile, but I got this.

You take up so much space, you’re just so much. But you walk down the street unaware, your steps strong and sure, knowing you deserve to take as much as you need. You know you’re worthy. Worthy of the room, worthy of the love, worthy of your self-kindness, and above all, worthy of this happiness.

To the woman who's just too much — too herself, too loud, too encompassing, too pleased and at ease.

Thank you. Thank you for loving yourself, so I can maybe learn to love myself, too.