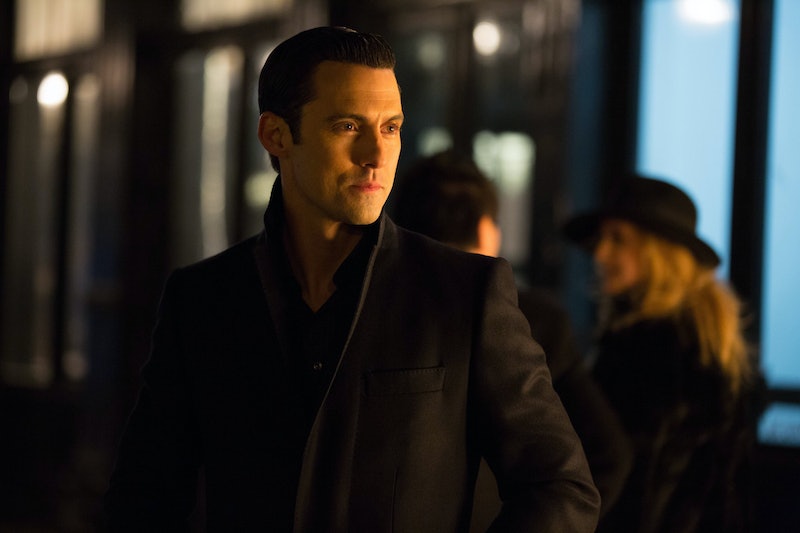 Gotham took about a month off for its health (or so I assume), and now it's returning for its final few episodes starting on April 13. With its return comes a new villain, the Ogre, or Jason Lennon, played by Milo Ventimiglia of Heroes and Gilmore Girls fame. But even though the Ogre is already the name of a Batman villain, Gotham is doing something totally different, as they have a few times already this season.

In fact, Jason Lennon isn't even supposed to be the same character as DC Comics' original Ogre, as specified in a Fox press release. In the comics, the Ogre was a man named Michael Adams with a very strange origin story. Kidnapped by a scientific lab, he is raised alongside an ape that is mutated to make it more intelligent. His ape brother eventually died, and Adams escaped to the streets of Gotham City, where he plotted to murder the scientists who mutated him.

A minor villain at most, the original Ogre was so named because of how his appearance was changed by the unwanted mutation. He has some similarities to Bane, the villain from The Dark Knight Rises, who uses a super serum that acts as a steroid to give him inhuman strength.

When you see Gotham's Ogre, it should become clear that Lennon is a wholly new character. His story is less high-tech, and a lot more Jack the Ripper. Rather than having superpowers or a suit of armor, Lennon is a serial killer who targets women by romantically pursuing them. Here's what FOX's press release said about the character.

Handsome, wealthy and seductive, the Ogre is a serial killer who has been preying on the young women of Gotham for nearly a decade, luring them into his web and confronting them with a series of 'tests' as he searches for his perfect mate. When the women fail to live up to his impossible standard, Lennon disposes of them quickly and viciously.

I don't know why the Gotham writers are adding more villains at the end of the season, but whatever their plans, I hope it includes resolving some of the things they've already set up, like the evil Dr. Dulmacher and Fish Mooney's allegiance with him. Lennon seems to be a wealthy, aristocratic type, not a mobster, so he may turn out to be behind the assassination attempts on Bruce Wayne's life. But more than anything, I think Lennon is there to add more danger to the season's final episodes.

We've seen in the trailers that Barbara will get involved with Jason, and I think that will be what prompts Jim to get serious about bringing him down. I know, I know, Jim G. always does the right thing, but the added pressure of saving his ex-girlfriend before Jason kills her will certainly put a fire under his ass as he and Harvey try to find adequate evidence to catch the guy. I'm sure they'll eventually be successful, but Jason might prove to be one of the most challenging foes they've ever faced.