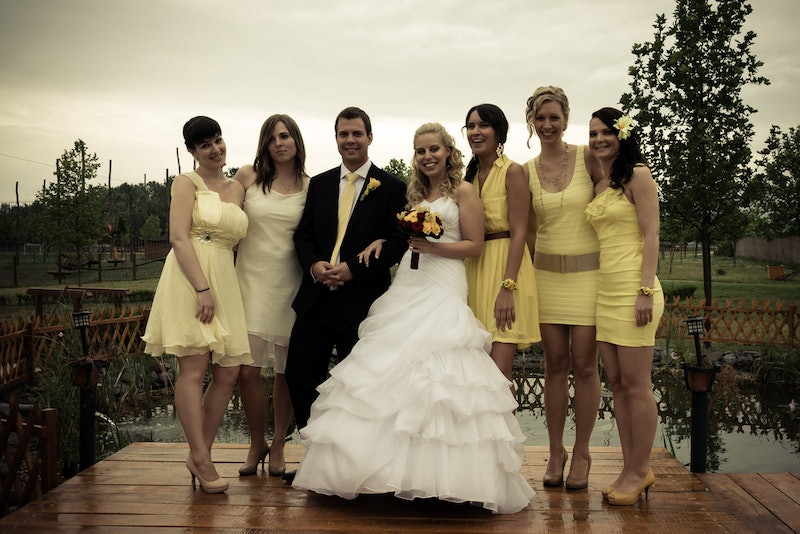 Wedding season is coming, so you know what that means, right? You've got it: Another series of astonishingly discouraging figures about exactly how much a wedding costs these days. Given that we've already looked at the latest numbers for how much brides and grooms are spending on their nuptials, let's take a moment to examine the average cost of attending a wedding as a guest in 2015. Are you ready for this? Are you suuuuuure?OK. It's horrifying, but don't say I didn't warn you.

It's $673. It costs the average guest $673 just to attend a wedding. That is almost $100 more than it cost last year, which was already awful at $592. Do you have a wedding to go to this summer? I'm sorry. Do you have, like five weddings to go to this summer? I'm so, so sorry. You have my deepest sympathies, and I really, really wish there was something I could do to make it better for you.

This great whopping dollar estimate comes to us courtesy of the annual American Express Spending and Saving Tracker, and I don't know about you, but I find it pretty terrifying. Where is all that money going, exactly? Marketwatch breaks it down as follows:

That only adds up to $606, so we can probably assume that the rest of the amount is going towards a wedding gift for the happy couple. Marketwatch also reports that the price most Americans are willing to drop on a gift has shrunk a few bucks from last year, likely in direct response to how expensive it is just to attend a wedding in the first place; Americans apparently plan to spend an average of $106 on a gift, which dropped from $109 last year — although the number goes up to $142 if they're buying something for a family member. Even that is a reduction from last year, though, with the 2014 number being closer to $150. Oh, and if you're in the wedding party? Expect to spend about $701, up from $618 last year.

I realize that the two biggest expenses — airfare and hotel accommodations — can be chalked up to the fact that people don't tend to stay in the same location their entire lives anymore. We no longer grow up in our hometown, marry someone from our hometown surrounded by all our hometown friends, and then grow old in our hometown while raising the next generation to do the whole thing all over again. But even allowing for that… I can't be the only one who thinks all of this is nuts, right?

I mean, yes, on the one, I do understand wanting to make the day “special” and memorable and all that jazz — and I'm sure that if my boyfriend and I ever decide to finally tie the knot, I'm going to have to work really, really hard not to get swept up in the whole “OMG WE ARE HAVING A WEDDING!” thing. But on the other… I just can't justify not only spending the equivalent of a year's salary for many people on a party, but also making other people spend that much just to come and eat a slice of cake with me. Or pie, as the case may be. Wedding pie is way better than wedding cake (as long as it's not Purple Wedding pie, anyway).

Or, think of it the way Rebecca Vipond Brink over at The Frisky framed it:

Weddings are important, but marriages are far more so. I just can't wrap my head around accepting that level of cost for one day right at the start of your marriage, when you haven't even really achieved anything as a couple. I mean, if you've been happily married for 30 years, by all means, that is worth celebrating with a big blowout party. But the wedding? Basically we're saying that we deserve to be heartily congratulated just for saying that we'll make a commitment, not even doing it.

Hear, hear. I kind of think we're at that point where we desperately need to realign how we think about weddings, marriages, and the relationship between the two. A wedding is supposed to celebrate the two people at the center of it, right? So why are we constantly making it about everything except the two people at the center of it? Why are we making it all about the trappings — the decorations and the outfits and the catering and the cake (which usually doesn't even taste good, anyway) — instead of about the people? I don't know. I really don't. This is just me personally, but I'd take a small party with a handful of my and my SO's best friends and immediate family over a giant shindig with a cast of hundreds any day. That sounds like a great way to kick off the future — and then when we get to the 30-year mark? Well, then, maybe that's the time to plan the huge to-do.

But hey, if the idea of an enormous party does appeal to you, at least there are ways to do it that won't totally break the bank — both for you and for the people who attend. It's OK to wear a cheap wedding dress; it's OK to go with a few DIY wedding hacks; you can have a fun and romantic honeymoon without dropping the big bucks; and you can even plan an entire wedding in one week if you're pressed for time. Just, y'know, don't forget what the point of a wedding is when deep in the throes of planning one: You get to spend the rest of your life with a person you really, really dig. And that? That's even better than the best cake in the world.