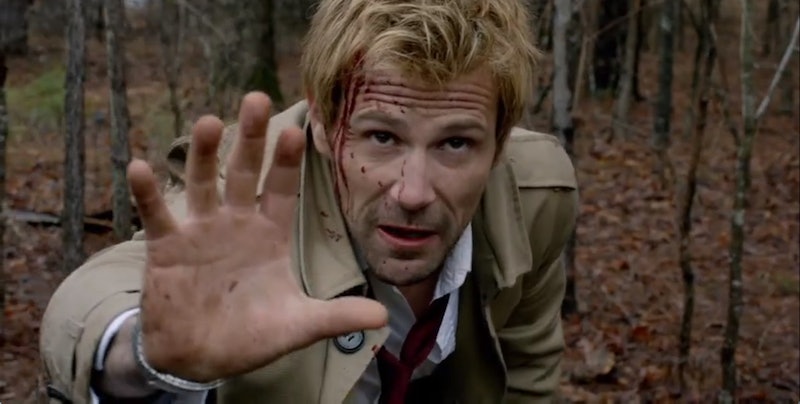 It's time to pour one out for the Hellblazer, because it looks like Constantine has been canceled over at NBC. While the network hasn't released an official statement, BuzzFeed reporter Kate Arthur published her detailed rundown of the all the shows getting picked up, renewed and canceled. And, unfortunately, the comic book-based supernatural drama was one of the casualties, meaning Constantine Season 2 is pretty unlikely.

The cancellation proves that the superhero renaissance is finite. In the TV sphere, we have such titles as Daredevil , Arrow , The Flash and Gotham , with plenty more on the way. Constantine is the first of the genre's new slate to bite the dust.

I had a feeling Constantine might be coming to an end. The series never garnered impressive ratings like some of its sibling series, and after its finale, the network didn't immediately leap to renew. The project was a bit of an experiment, even as far as comic book series go. The Hellblazer comics aren't as popular as, say, The Avengers, and the content is a mixture of supernatural and superheroes.

In the hopes of easing the pain that will come with a formal cancellation announcement, here are some of the moments we're all going to miss from Constantine.

From the very start, John Constantine has done it all, seen it all and is over it all. It happens in the field of exorcism and demon hunting. After a while, one can become numb to seeing the more horrific apparitions on a day-to-day basis, and John was the true embodiment of a lifetime's worth of this feeling.

How do you keep yourself sane when you experience demonic activity, living nightmares and other various dark matters on a daily basis? Drink heavily, obviously! A bottle of dark liquor pairs nicely with John's cynical nature.

Part of the fun from Constantine came in the form of hidden clues pointing to other DC characters in the universe. The most notable of these Easter eggs was Doctor Fate's helmet found in John's collection of mystical artifacts, items and spell books. And just behind the helmet, you'll see an Egyptian staff, which is actually called the Ibistick and belongs to Prince Amentep.

John Constantine can charm the pants off any woman, and he doesn't have to use a mystical charm to do so, either. Although, he does have that English accent, which helps loads, if I'm being honest.

I don't know about you, but I love a man with some chest hair. While actor Matt Ryan has the bare minimum — like, the BARE minimum — he pulls it off nicely. Paired with that bad boy, supernatural hunter personality of his, and he's an irresistible source of man candy.

Fantasy gets a bad rap. And, no, I'm not talking about Fifty Shades of Grey-type fantasies. Sci-fi and comic book-inspired entertainment always get their time in the limelight, but there's a lack of supernatural material. Vampire Diaries and The Originals count to some extent, but Constantine was more about magic and ghosts and demons and something other than vampires and werewolves. Where's more of that?

Yes, I'm even going to miss all the crazy demons running around the Earth that only the supernaturally inclined can see. They have that Walking Dead quality that makes those zombies so lovable... I'm kidding, they're terrifying, but sometimes I love getting freaked out.