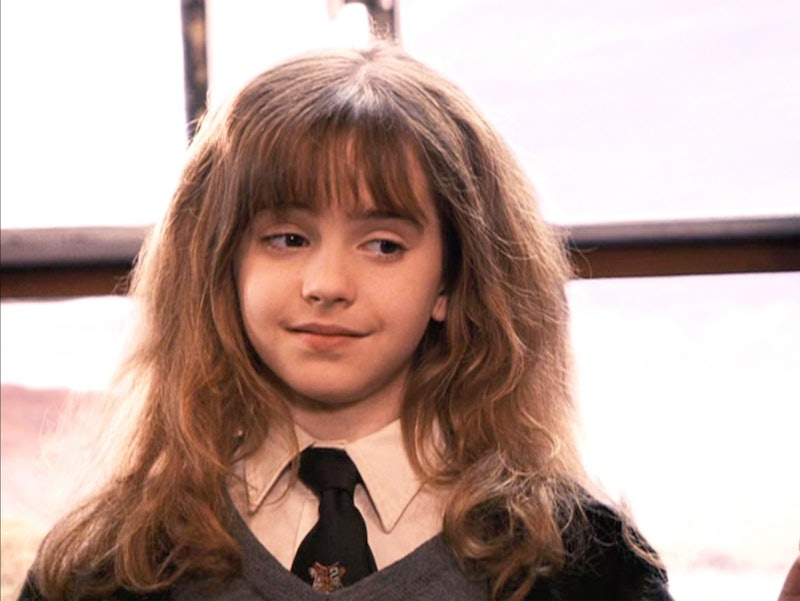 Sometimes it's difficult to express how you're feeling in words, so you turn to Emojis to say what you need to say. But when you really want to show your emotions, the best way is to use a Hermione Granger reaction GIF, specifically from Harry Potter and the Sorcerer's Stone. Even though every Harry Potter movie had amazing eye rolls, laughs, and angry spell-casting from the whip-smart wizard, there's something about Hermione's youngest self that really understands how you feel.

With her big hair and even bigger vocabulary, she experienced a full range of emotions in the first movie, helping to save Harry and Ron from danger time and time again, acing all of her classes, casting every spell in the book, and being perfectly sassy along the way. It's hard to believe that it's been 14 years since the movie was released, and even crazier to think that star Emma Watson is 25 now. So to celebrate her quarter-life milestone and everything we love about Hermione, use 11 essential reaction GIFs to tell the world how you're feeling. Think of it as a modern-day AIM away message, because life would be better if we could live like we did in the '90s. Or maybe the early '00s, because that's when we got the magic that is Harry Potter (pun absolutely intended).

Enthusiastic (But Faking It)

Slow clap for the bro who just shotgunned a beer at the bar.

Sometimes you can't be bothered with the mariachi band on the subway.

Everyone needs a good knock-knock joke.

When someone does something stupid, call them out.

Go all Hulk on someone if they steal your elliptical at the gym.

Show 'em how it's done and show off your skills.

Use this one when you're feeling smarter than everyone around you.

This one applies to almost any social gathering that you wish you weren't at.

You don't deliver pizza after 10PM?!