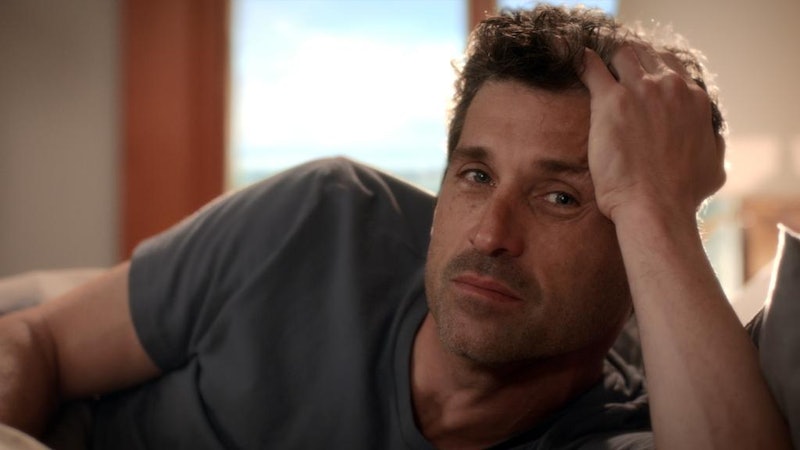 After last week's Grey's Anatomy teased Derek Shepherd's death, I was afraid to watch Thursday's episode. But fortunately I have good news. Derek isn't dead. But as with all Grey's Anatomy news, there's a bad side too. Derek may not be dead yet, but it's not necessarily looking great for him either. The teaser for next week's episode shows that Derek may be involved in a car accident.

The entire episode on Thursday kept fans in suspense wondering what happened to him, while Meredith silently tried to pretend she wasn't totally freaked out that her husband was missing. It wasn't until the promo for next week's episode that we got any kind of hint as to where Derek might be. According to the clip, he's alive and well. He witnesses an intense car accident and stops to help. (He's such a good guy.)

But of course, in Grey's Anatomy land it is never, ever that easy. So, I'm not entirely sure Derek is off the hook yet. An ominous voiceover warns fans, "Nothing can prepare you for what comes next." And if that weren't scary enough, that line is followed up with, "This is the episode America will never forget."

I'm gonna take a chance here and assume that we're not just going to see a heroic Derek save the people in the other car. In fact, I'm going to go out on a limb and say it's his good deed that gets him killed. Maybe he's not injured in the initial crash, but there was a pretty scary-looking car explosion in the promo. Maybe he gets caught in that?

I think if Grey's Anatomy is looking for a way to kill off Derek Shepherd, this is it. It's a way to let him go out the way he came in: charming and heroic. He's the good guy who stopped to help the three trapped people. It would be a disservice to his character for his death to not mean anything.

If the show is going to lose one of its best characters, they better do it right — and I think they're trying their best. I don't want to see Derek Shepherd die. But I especially didn't want to see Derek Shepherd die so soon after he was a cheating jerk. I think Grey's brought him back these last couple of episodes to make things right. Every sentence out of his mouth on Thursday sounded like his last words, but it's the goodbye we need.

He made things right with his sister, he apologized to Meredith, and then the two had a conversation right before he left in which he told her exactly how much she means to him. "You're like coming up for fresh air. Like I was drowning and you saved me," he told Meredith before leaving on his fateful trip. "I still feel that way when I see you. It's you. It's always been you."

Those words could be a good note for MerDer to end on. The last thing I want is to lose Derek. But if we have to, he deserves to go out in the right way, and having him save the lives of those car crash victims isn't a bad way for a doctor to go.