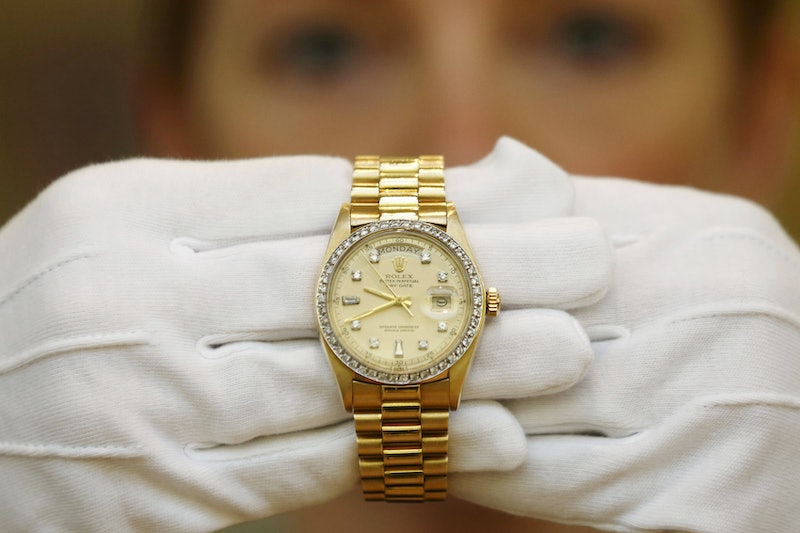 I’d argue that watches are the type of accessory you’re more likely to covet than to own, but that being said, watches are having a comeback this spring. While analog watches exude a sort of classic elegance, with stainless steel or leather bands and Roman numerals, digital ones are more blatantly utilitarian.

Open any fashion magazine and you’re guaranteed to see advertisements for watches, many of which are luxury items that clock in at the four, often five-digit, price level. Aside from the top .001 percent, many people who own a classic Rolex watch own it as one typically does a wedding ring or any other piece of sentimental jewelry: They received it for a special occasion, they own only one, and they’ll have it for a lifetime. And while wedding rings aren’t on the noticeable decline, watches have been in recent years as we’ve minimized our need for them in favor of cell phones.

The cycle has come full circle though as the smartphone reinvents itself in watch form. Wearable devices have been buzzing about the tech industry for a while now, and just as the iPod changed the way we listen to music, the new Apple Watch might have the power to change the way we use watches. Despite their high-tech horizons, watches, including analog ones, are having a comeback. Here’s why:

1. Apple Watch Sales Are Through The Roof

The Apple Watch, which received an estimated one million pre-order sales in the U.S., is released on Friday April 24th. Most of these orders were for the Apple Sport line (starts at $349), while a smaller portion were for the stainless-steel Apple Watch line (starts at $549). Based on these stats alone, you can expect to see a lot of people wearing high-tech, especially sporty wristband-clad, watches on the street very soon.

2. Traditional Watch Brands Are Getting Smarter

The Apple Watch isn’t the first smart watch to come out, but it is the first one to have a serious effect on the watch industry. As Apple enters the market, watch brands have announced plans to launch smart watches of their own. Luxury watchmaker TAG Huer (whose ads feature a fist-pounding Cara Delevingne) announced its plans to make a smart watch in December.

3. Advertisers Are Targeting The Right Industry

Up until last month, I had only heard about the Apple Watch from techies in my office’s elevator who talk about “wearables” with the enthusiasm that I reserve for spring denim trends. I didn’t realize the Apple Watch was a reality until I sat down with a new issue of Vogue and the Marc Jacobs, Louis Vuitton, Saint Laurent ad pages that usually greet me were accompanied by a heavy white booklet filled with pages upon pages of Apple Watch designs. My first thought admittedly was, “Wow, this is the stuff that keeps print magazines in business,” but my second was, “I guess the Apple Watch is a thing.” The Apple Watch is succeeding where its wearables predecessor Android failed: Advertising to the fashion set.

4. Tiffany's Is Having A Comeback

The robin’s egg blue box brand has a strong heritage in the American lexicon of jewelry retailers, and over the past year — as evidenced by Cate Blanchett’s necklace at the Oscars in February and the release of the annual Tiffany's Blue Book Collection last week — it’s having a renaissance.

Design director Francesca Amfitheatro is to thank for the fashion and celebrity set’s newfound interest in the design house, which is where we typically go for classic pieces rather than trend items. So what’s it have to do with watches? Last week, the retailer unveiled a massive digital clock tower at Los Angeles International Airport to advertise its new CT60 watch collection. Using a 72-foot tall digital clock to remind travelers of a new watch collection is pretty brilliant advertising.

A device that only has one function? How retro! Retro is a tricky word — when we say something is retro, what decade are we harking back to? It doesn’t really matter when it comes to watches because no matter how far back you seek fashion inspiration, watches were always more popular than than they are now. Less people wear them now because our time-telling phones don’t necessitate a need for a device that solely tells time. But retro glam has never been more in vogue than it will be in the coming months as fall 2015 runway trends hit mass retailers, so do yourself a favor and buy a watch.

6. They Can Be Affordable

Buy a watch? Aren’t they expensive? Yes, luxury watches are real bank-breakers (in its most luxurious form, the Apple Watch retails for $17,000), but watches are one of the most democratizing pieces of jewelry on the market. There’s a watch trend for every price bracket. Swatch watches retail for as low as $50, a Michael Kors watch averages in the mid-two-hundreds, and Shinola watches are priced in the mid-three digits. Plus, not all luxury watches are as expensive as the 18-karat gold Apple Watch: A Cartier watch starts around $2,000. Still expensive, but I’m just throwing it out there.

Here are two things that are on trend for 2015 and the foreseeable future: minimalism and statement pieces. Combine the two and voila, you have a watch. Timepieces are a simple accessory that exude a kind of sophistication, and wearing say, a pair of jeans with a white shirt and a watch, is an easy way to master the minimalism trend.