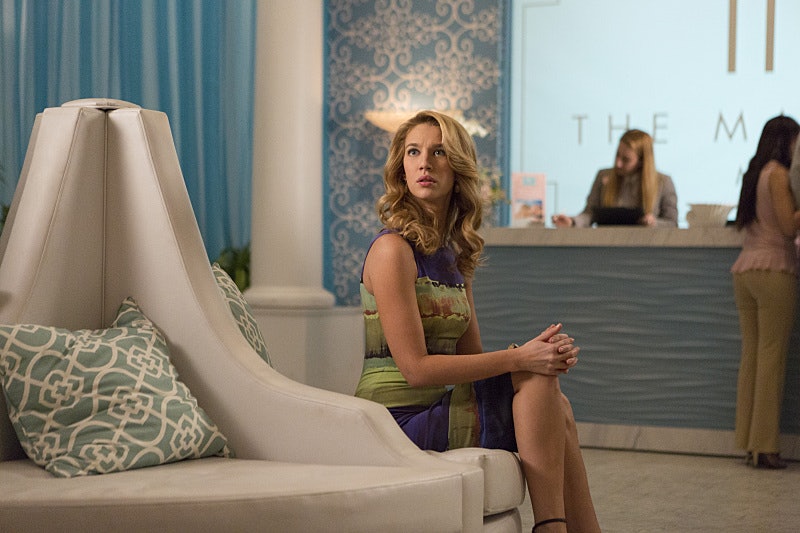 Jane the Virgin specializes in mixing the realistic with the outrageous, and because of all the drama that brings, the show needs a villain... or two. When the series first premiered on the CW, I thought Petra was the villain of Jane the Virgin . Yet, the now part-owner of the Marbella with a mysterious past is way more complicated than that. Besides always looking completely flawless (how I wish I could pull formal shorts off like her), Petra has been slowly winning me over. I still don't trust the ex-wife of Rafael completely, but I do sympathize with all of the craziness that this woman has had to endure — much of it at the hands of her dangerous exes.

Actress Yael Grobglas knows that her character Petra is a bit conflicting, as she told Time, "You never know if you want her to find true love and live happily ever after, or if you want her to be a complicated villain." When we first met Petra, she was the evil wife of Rafael, who was forcing him to stay in a loveless marriage so she could get the money from her prenup. She also was cheating on him with his best friend and former college roommate — Roman Zazo. When Jane (instead of Petra) got artificially inseminated with Rafael's sperm, Petra manipulated the situation to try to get Jane to give the baby to her and Rafael. When Rafael tried to leave her, she even had her mother Magda hit her to frame Rafael for domestic abuse. Seriously, Petra?! Wtf. I mean, if that's not villainous, I don't know what is.

As this was fans' introduction to Petra, I hated her (and loved Jane) right away. I mean, Rafael didn't even know Petra was planning on getting pregnant with his sperm and she was going to use her pregnancy to force him to stay with her — that's severely messed up. At the time, she just seemed like a trophy wife who was willing to have a baby if it meant she got more money.

But as the show evolved, so did Petra. Turns out, Rafael had stopped loving her — not the other way around. She was bitter that the man who she stood by while he fought cancer had given up on their love. Remember when she shed a real tear confronting Rafael about this? That was the first time I felt empathy for her.

During this time, she befriended/was blackmailed by Jane's boyfriend Michael, who had discovered that Petra was cheating on Rafael. All of the lies were uncovered by Jane and Rafael, but since then, Michael and Petra's platonic relationship has been fascinating. Michael is a reliable man she can trust when she gets criminal intel. Most of the other men in her life (with the exception of Rafael, I think...) are closer to just plain criminals — but that doesn't mean Petra lets them get the best of her.

When Milos — Petra's ex from the Czech Republic — came to the Marbella, Petra was less than thrilled and a bit fearful. Milos had scarred her mother with acid back in the Czech Republic, which caused Petra to flee and change her identity from Natalia to Petra (with help from the man her and her mother held hostage, Ivan), so it was understandable that she wasn't open to reconnecting with Milos. But oddly, Petra and Milos combined forces when he pretended to slit Petra's throat to help prove that Magda had been lying about needing to be in a wheelchair. He then bought a third of the Marbella and ended up giving the ownership with Petra — because he loved her that much. I mean, Milos may be insane, but that's kind of a testament to the type of woman Petra is, right?

I was worried again with Petra owning the Marbella and being a constant presence in Rafael's life (especially after Luisa gave her voting interests to Petra instead of her brother Rafael), but Petra has proven to be a decisive entrepreneur for the struggling hotel. When her ex-fiancé Lachlan tried to usurp power, she combined forces with Rafael to get Rafael back in power. When Lachlan threatened to leak their sex tape, she did the brave and smart thing and leaked it herself — and then blamed it surfacing on Lachlan. The board of the hotel did not approve of Lachlan's immoral behavior and still managed to respect Petra. Well played, Petra. Well played.

Petra and Rafael actually make a great team when it comes to running the Marbella (not so much in marriage). She helped him use his connection to Rogelio to get musician David Bisbal to perform at the hotel. And she knows how to throw a seriously party as evidenced by that whole merlin/marlin ice sculpture shindig (just ignore the murder that occurred).

I have faith that Petra can make the Marbella a thriving destination again — as long as some other ex-lover of her's doesn't come out of the woodwork/hidden plastic surgery tunnels to mess it up.

But even then, I think Petra will continue to come out on top like the badass she is. As Jane the Virgin showrunner Jennie Snyder Urman said to Time, "I always tell Yael, 'Petra is the hero of her story.'" Jane may be my hero on the show, but I can get down with Petra being her own hero.