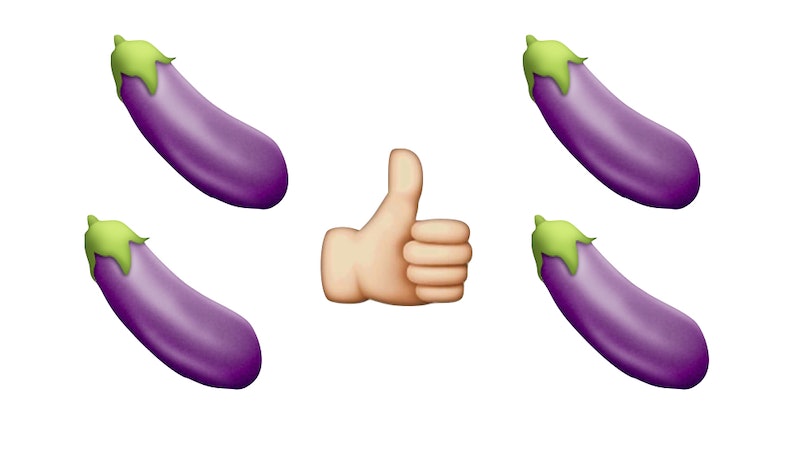 Much of the social media-using world collectively flipped out today when we received news that you can hastag emoji on Instagram now. Admittedly I am not one of these deliriously happy folk, as I neither use emoji (with any sort of regularity, at least) or Instagram (at all) — but I can appreciate how exciting this whole must be for people who are fond of both. But! What's this? A controversy already stirring? Yes, and it's called #FreeTheEggplant, What is #FreeTheEggplant, exactly? Well, it wants to... free the eggplant. Here, lemme 'splain:

After BuzzFeed, like so many, had gotten the initial “hoorahs!” and enthusiastic use of prayer hands out of their systems, they discovered something a little less joyful — namely, that you couldn't search for the eggplant emoji. Smiley faces, yes; confetti, yes; even, as BuzzFeed news reporter Katie Notopoulos pointed out, boring ones like the graph emoji. Who uses the graph emoji? I have no idea, but apparently some people do. Do with that what you will.

After a little digging, though, Notopoulos realized that this strange omission might be related to the fact that Instagram “blocks certain hashtags that have graphic or harmful content.” This doesn't mean that content under those hashtags doesn't exist; it just means that Instagram prevents them from appearing in search to make it harder for others to find them. So, then, given the eggplant's conspicuous absence, it appears that Instagram knows exactly what most people use it for: That is, as a lovely little graphical representation of a penis. And for the curious, no, #penis doesn't show up in search either.

Here's the weird thing, though: You know what you can search for? The gun, syringe, and pill emoji. In protest, Notopoulos subsequently started up the #freetheeggplant hashtag; the hope is that it will lead to the eggplant finally being deemed searchable:

Others have already begun following suit:

So we'll have to keep our ears to the ground about whether the protest accomplishes its goals.

The parallels between #freetheeggplant and #freethenipple are obvious — but perhaps #freetheeggplant isn't as silly as seems at first. I realize that a little picture of an eggplant doesn't quite carry the same importance as, y'know, the idea of not policing women's bodies… but it is sort of interesting that the picture that's representative of male genitalia is the thing that's getting censored this time, is it not? I suppose at least that censorship is finally consistent, even if it's mostly through its inconsistency: The same way many social media sites have come under fire for allowing some posts featuring women's bodies to remain and removing others seemingly with no rhyme or reasons, we're seeing the same thing here with the eggplant versus the arguable more problematic gun, syringe, and pill emoji.