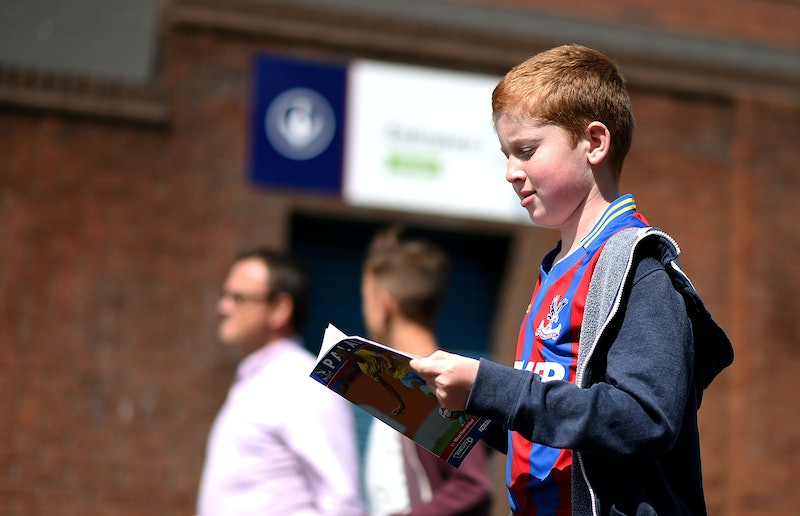 There was a period of time when I swore I'd never have children, which was sometime in my teenage years. But then I was blessed with my identical twin nephews, who gave me the endearing nickname of Ain't B (an abbreviation for Auntie Bear) and months later laughed uncontrollably at my having to wipe their butt cheeks while they potty trained. From that moment, and the equally hilarious scenarios that ensued, I've been sure that sometime way in the future I would like to have sons of my own.

While catering to my nephews' every whim has been great practice, I believe nothing can truly prepare a woman for raising a man. I've spent a good portion of my life trying to understand men, trying to get to the center of why it is they do what they do. I have nothing to report here (otherwise, I'd probably be a zillionaire). I have accepted that I may never know, and that in this instance, ignorance may really be bliss.

But in an effort to get to see behind the curtain, to say I truly understand at least one male in life, I will use these 11 books to influence what I ultimately cannot control. Here are the books I'll give my future son. Maybe you will, too.

By the time I have a son, the new world M.T. Anderson illustrates in Feed may exist or we may have surpassed it. Nonetheless, I believe this futuristic satire will keep the attention of my growing boy; one who will likely be glued to the screen of some electronic device, and approaching the phase of being too cool for school; and me, who's sitting in the backyard, reading books. I hope that my son sees that reading can take him to another world the same way his video games do, but for less money, and with less strain on his (if he takes after me) already poor eyesight.

This one is funny. And the one thing that makes adolescence just a little bit easier to bear is the ability to laugh at yourself and heartbreaking circumstances. Not to say adolescence is a joke, or that it doesn't shape us for the rest of our lives, but we all go through it. We all try to fit in, to stand out, and most of us make it to the other side with the ability to look back at those years of our life and laugh — at outfit choices and at the so-called tragedies. I hope that by reading Sherman Alexie's novel that has cartoon drawings throughout, my son will see that this too shall pass. You know, whatever "this" may be.

I Remember by Joe Brainard

Although the memories Joe Brainard recalls in this completely original book are from the 40s and 50s, the humor and heartbreak speaks to all generations. This book is an easy read and a reminder that all the little things add up to big things. I hope my son holds tight to his own quirky memories, learning from some of them and prospering in spite of others.

Doing It by Melvin Burgess

While I'm sure it's totally possible that my outlook on my future son's sexual activity may change as I get older, I currently believe it'll be best to just lay it all out there so that he feels no shame about his natural desires, yet still knows how to manage those feelings. I hope that upon reading this work of fiction by Melvin Burgess, my son will see that puberty is completely normal, and that there is no conversation out of bounds. Having an open dialogue will allow me to raise my son to have an open mind — and that's high on my list of hopes for my future children, male or female.

This book, written by John Green and David Levithan, was the first LGBT-themed young adult novel to make it on to The New York Times children's best-seller list. In this novel two boys with the same name experience high school in very different ways, one of them being heterosexual and the other homosexual. As their lives start to intersect, we see what the youth of the LGBT community face on a daily basis. I hope that by the time I have a 16-year-old son, he's unable to recognize the fear that the LGBT community faces today. I hope that he has lesbian, gay, bi, transgender, and heterosexual friends — all of whom accept and support one another. But in the event society carries on with its ignorance, I will ask that my son read this novel, that he know there is a place in this world for all of us, and that he welcome with open arms those with beliefs different than his own.

Because I cannot stand the thought of raising a man who is blind to the truths that are outlined in this book. I don't ask that my son be a meninist, but I ask that he be informed, that he not take his social standing for granted, and most importantly, that he never underestimate women both as a whole and as individuals.

Notes of a Native Son by James Baldwin

I sincerely hope that by the time I have children, the racism recounted in this work of nonfiction seems unfathomable to them. However, I will require my offspring to read this collection regardless so that they can begin to understand the privilege they will likely, even if just for a moment, take for granted. James Baldwin writes about race in such a powerful way that his essays are as moving today as they were when they were first published in 1955. I hope my son lets that sink in, decades later when we're STILL fighting this sort of injustice. What I hope my son takes away from this collection is best summed up in the essay titled "Notes of Native Son": "Hatred, which could destroy so much, never failed to destroy the man who hated and this was an immutable law."

Drinking age, right around the time he'll (legally) begin frequenting bars and occasionally be accused of being a creep by a female of interest. He'll likely be left wondering what he did wrong, so in an effort to help him understand women the way I want to understand men, I will welcome my son into the mind of a female through this collection of essays, which span from politics to feminism, with some pop culture in between.

This How You Lose Her by Junot Díaz

I will undoubtedly be the kind of mother who has a hard time cutting the umbilical cord when it comes to my son falling in love with a young woman — whom he will of course start to rely on, and in turn will no longer need me in the ways he once did. But before I get there, while I can still see clearly, I plan to hand my son this collection of short stories about the power of love (in all forms) to remind him to love what is before it's no longer, that nothing is fair in love or war, and that as Díaz puts it, "The truth is there ain't no relationship in the world that doesn't hit turbulence."

Me Talk Pretty One Day by David Sedaris

I will hand this book to my son for no reason other than David Sedaris is hilarious and his writing is seamless. In this collection of essays, Sedaris recounts memories from his childhood in North Carolina, time spent in New York City, even his move to France; telling each of these stories with a kind of humor and wit that make you feel as if you're friends swapping stories over a few beers. This collection helped me to remember that not everything has to be taken so seriously, that some things are worth doing just for the story you can later tell your friends. No regrets. I hope my son allows himself that same kind of freedom while he still has his youth.

I hope that by 25 years old, my son has learned (mostly from me) that it's more than OK for him to be in touch with his emotions without fear that society will label him a little bitch. And in an effort to bring his emotions to the surface, I will give him this devastatingly beautiful collection of poems by Charles Bukowski. In this collection, my son will be forced to reflect on his own traumas in order to truly understand the place that Bukowski writes from. And I hope that in doing so my son will begin to make sense of those traumas, acknowledging the ways in which they've forced him to grow stronger, wiser, and more brave in his endeavors. I hope that despite his failures and the societal norm he stays hungry and stays hunting until he finds what satisfies his soul, whatever that may be, because a lion does not lose sleep over the opinion of sheep.