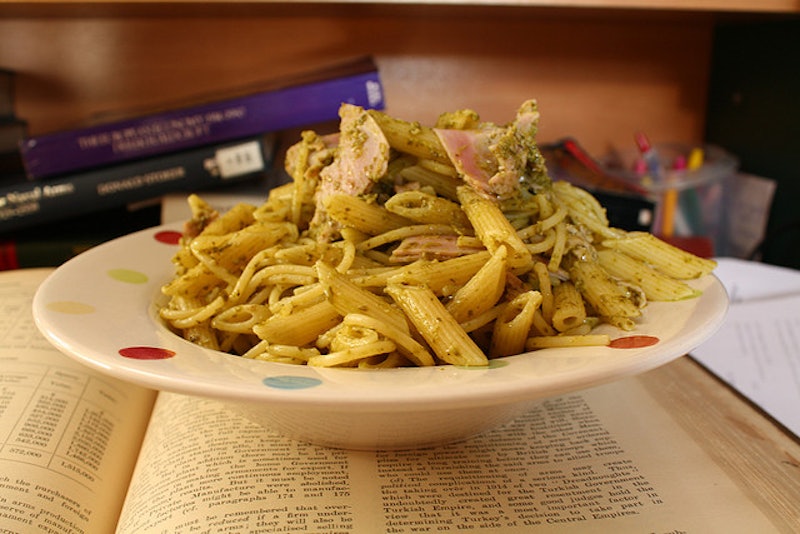 Remember the last time you were having a totally miserable day, and then suddenly someone offered you a cookie and all of your troubles melted away (and the crumbs got all over your keyboard)? Even if it was someone in your office whom you barely knew and almost never spoke to, that person was instantly your best friend... at least until the next person who brought in treats to share. Whatever. No judgment. There's something about food that makes us instantly love the people who made it, as if they knew just how much we needed some inspiration at that moment and swooped in to save the day.

There are some amazing foodie writers who make your mouth water as they describe the meals their characters get to enjoy, and you wish you could transport that food through the pages and into your empty fridge (because who has time for grocery shopping?). But then there are the fictional cooks behind some of the best meals on the pages... they're really the unsung heroes (or, well, villains). Cooks drive their respective plots in so many ways, because anyone who makes copious food on a regular basis must be capable of other amazing things, too.

Here are eight literary cooks who would be great to share a meal with... although in a few cases, it might be wise to have someone check the ingredients first.

That feeling of elation we get the first time Harry sets foot in the Burrow in Chamber of Secrets is tinged with jealousy when Mrs. Weasley starts serving food. From the first breakfast after he's rescued from the Dursleys through the end of the series, the books are filled with descriptions of Mrs. Weasley's sandwiches for the train, mince pies for Christmas, cakes for birthdays, and more. Having a wand would probably make cooking more convenient for anyone, but still, good food goes a long way toward helping Harry feel like the Weasleys are the family he never had.

Calpurnia, To Kill A Mockingbird

As a rare treat, Calpurnia cooks Scout's favorite snack — crackling bread, which is made with cornmeal and pork rinds. The novel is filled with other references to mouthwatering Southern treats like Lane cake (layered white sponge cake) and charlotte cake, along with more commonplace foods like buttered biscuits, not to mention the ham costume Scout wears for her school play. But no matter how skilled Calpurnia is as a cook, she has a larger role to play in giving the Finch children a different perspective on the racial tension dividing their town.

At the beginning of this book, you feel so sorry for Charlie that you just know he's going to find a golden ticket. And the chocolate factory... well, it's a paradise, and who can really blame Augustus for falling into the chocolate river? A lifetime supply of chocolate is the best contest prize I could possibly imagine. It's hard to know what to think of Willy Wonka; it's a delicate balance of fear and awe, but if he gave away his factory as a prize, he can't be all that bad. And we can't move on before giving some credit to the Oompa Loompas for their role in chocolate-making.

We never get to see Eliza do any cooking in this Agatha Christie short story before she mysteriously disappears, although Hercule Poirot discovers during his investigation that she has a soft spot for stewed peaches. Poirot is notoriously picky about his food in other novels where he appears, but in this case he's never portrayed having a meal. He finds the cook easily by placing a newspaper ad, but she's only one piece of the true puzzle — a bank robbery and murder.

Asia has a formidable task in the sequel to Louisa May Alcott's Little Women: feeding a houseful of boys who live at the orphanage Jo runs with her husband. She rises to the challenge magnificently, especially during the Thanksgiving feast at the very end, serving staples like turkey, duck, cranberry sauce, pumpkin pie, and apple cider. She can be hard on the boys when they try to steal her pies, but she also saves the day when Daisy tries to cook for the first time and burns her pie to a crisp.

In Isabel Allende's take on the popular folk hero's childhood, Nuria is an exceptional cook — so good, in fact, that she can transform even the unsavory food on an 18th century transatlantic voyage into meals that everyone praises. But she's an adventurer too, braving a journey across Spain on foot with Diego, Juliana, and Isabel, and even saves the girl from being attacked by using eggs to paint their faces in a way that makes them look like they have a contagious disease.

This book might be a little disturbing and nightmarish, but it's still a Christmas classic because in the end, Scrooge finds it in his heart to do what every reader knew he should do from the beginning — make sure the adorable Tiny Tim has a nice Christmas meal. Constantly cheerful even when she barely has enough to feed her family, Mrs. Cratchit finally gets to prepare an enormous turkey in the end, and if you're watching the Muppets film adaptation, she might even sing a song about it.

Minny shows that she has a kind side when she tries to teach Celia to cook, even though it's a lost cause, but that's hardly the memorable part. If you haven't read or seen The Help, I won't spoil the scene where we finally find out why Hilly hates Minny so much, but let's just say it has to do with a chocolate pie containing an unsanitary ingredient. I have to wonder how Hilly got through two slices without noticing anything. The thought makes me want to swallow a bar of soap. Images: ed_needs_a_bicycle, Clemens v. Vogelsang, Memphis CVB, Lee McCoy, led_head101, rpavich, Pat Anderson, Kelvin Beecroft/Flickr Creative Commons; Fred's Fruit/Tumblr