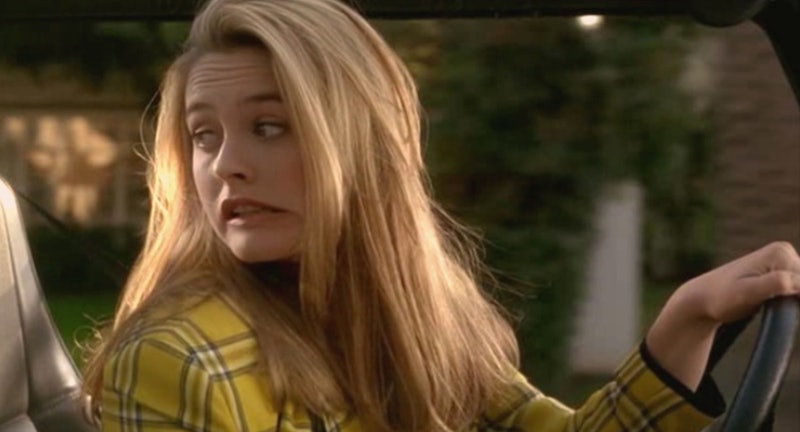 And so it goes, some of us are guilty of apologizing more than we need to. At a certain point, it comes up so much it reaches such a zealous, continuous point that there's no denying it: We are over-apologizing. In relationships, over-apologizing is especially problematic. Which is not to say that the whole "sorry not sorry" thing is a universally great approach either. Sometimes we mess up, and when we do, we should apologize. If you did truly make a mistake (again, as human beings are wont to do), an apology is totally OK, if not completely mandatory. I'm not talking about that kind of perfectly justifiable, if not necessary, apologizing here. There's a difference between being aware, accountable and shrinking meekly. Over-apologizing often happens when people are uncomfortable, or insecure, or just plain awkward. Maybe it comes from socialized messages that we should feel guilty about asserting ourselves, or going after what we want, and so whenever we do that in any measure, no matter how tiny, we feel programmed to excuse ourselves and apologizing for having "nerve" to exist.

Or maybe it's just because some of us are totally awkward, so we assume everything we do is awkward, and that everyone knows it's awkward, and so we apologize for every tiny action we engage in. Not that I would know anything about that. I'm, uh, writing for a friend. Yeah. *hides and then apologizes*

For me and my chronic over-apologizing, I think part of it comes from the sources I just named, but also from the nagging feeling deep inside that I can't smother; the one that hints maybe I'm not actually a good person, that I do have something for which I absolutely must apologize. In most cases, there's no need to say you're sorry. This becomes even more true in straight-up ridiculous scenarios in which you did nothing wrong. Take, for instance, the classic case of a person crashing their body into your body in a sea of rushing bodies, perhaps on a crowded subway platform. Did you instinctively apologize, despite the fact you were stationary? You might be a chronic over-apologizer. (Welcome to the club! Sorry it's so cold in here, and messy, and that I'm alive.)

How can you tell for sure if you're a part of this team? Let's investigate some key signs you're a chronic over-apologizer:

You apologize to inanimate objects

Run smack dab right into a couch or lamp pole or garbage can? Without even registering the pain, we weirdos huff a heartfelt apology to the object that actually has no feelings. This isn't normal, guys. And this is particularly unfortunate for those of us over-apologizers who lack physical grace. Oy.

You struggle in expressing gratitude

Instead of thanking someone for their patience (a little trick I learned in the retail biz), you gush with apologies about factors that are, more often than not, outside your scope of control. This could be said if, for instance, someone borrows your car and returns it with a full tank. Instead of a totally adequate "thank you," you might panic and be all, "AHH! I meant to fill it up before you even needed it! I hope the gas in there was OK and enough for your needs! I'M SORRY."

This is why no one wants to go out to eat with you anymore! Should the server bring you the wrong food, and you point it out, you aren't able to do so without draping the correction in a cloak of apologies. When we present a 100 percent valid problem to discuss and solve, you apologize the entire time you're talking about it.

You say sorry for taking your time

You weren't done fully absorbing that piece of art in a gallery but the flow of traffic is pushing you along regardless? Instead of continuing to look at your own pace, you break to apologize about existing in a potentially inconvenient way to other museum patrons. Chances are that this failed effort to be polite will break other people's ability to concentrate on the exhibit... which you will, of course, apologize for.

You apologize for your body

You either decide that whatever you're wearing suddenly doesn't look good on you, or you feel paranoid that you're in the way. Regardless, over-apologizers are often prone to feeling like their actual, physical presence requires an apology, and as such, can't seem to keep their paws off their own body, trying in a futile fashion to contain it to a smaller space area or whatever. It's not that you don't love or even respect your bod, it's just... a thing. It's a thing.

You say sorry about things from your past

Literally everyone has a past and most of those pasts include at least a few sordid, shadowy little corners. You mentally know this, probably, but despite that huge truth, you continue apologizing about oversights, opinions, and actions from your own past.

When you do actually screw up, an apology seems insufficient

When your constant cadence rings a depressing tune of "I'm sorry", when you really need that apology power, it isn't there. You apologize so often that people barely register it when they hear it — which could be a problem when something comes up where you really need them to hear it. I mean, as a whole, we should all try to just not mess up in a way that negatively affects others, but slipping is inevitable. Unfortunately, though, it seems a lot harder to remedy in the over-apologizer's world.

You apologize for your inherent, totally harmless personality

You're sarcastic but keep jokes within a reasonable measure? That's fine. You want to put a lot of hot sauce on a burger you ordered and are not sharing with anyone? Go wild. You choose to paint your nails a flamboyant orange hue because it caught your eye at the nail shop? Woo-freakin'-hoo. There's zero need to apologize for our own taste and tendencies as long as they have no chance to infringe others in a harmful way. But over-apologizers do it all the time. We can't help it.

You say you're sorry when grabbing the last of anything

This is why buffets at receptions legitimately give me anxiety: I hate taking the last of anything, especially if that something is delicious and there are other people who want it. Hell, I might even give someone the last avocado at Trader Joe's on a Sunday evening. For whatever reasons, we have problems understanding (including "society" and "weird brains"), we feel unworthy. So we apologize or, like I said, completely forgo something we want. Don't wanna be a bother!!

We over-apologizers will sometimes issue apologies even just when replaying events in your head. Alone. After they've happened. Sometimes I'll drop the clothespin while opening my cat's bag of kibble, and apologize to the clothespin, and the cat, and the kibble, and the floor. And when we do stuff like that, we know it's all pretty insane (even though we will probably continue the habit).

You say sorry about pursuing things you want

Instead of funneling all energy and focus into obtaining said goal, we end up reserving a slice to cover our numerous apology bases. I know personally I end up frequently loading my plate with so many work projects that I'm less available for friend or romantic hang-outs. The apologies for that lack of openness in my schedule won't quit.

When others point out your habit, you apologize

It's a knee-jerk reaction. And one that (trust me) gets very old for those around us often to stomach over long periods of time. A friend of mine recently started responding with, "Apology NOT accepted." She's ribbing in good nature, of course, but the point resounds all the same.

It's time we all rise up and work hard to tack another two words to those other one we've been sighing forever. Those words: "not sorry." Deep breaths, y'all? Ready? "Sorry, not sorry." We'll get over this. And if it takes some time... well, I won't say it.