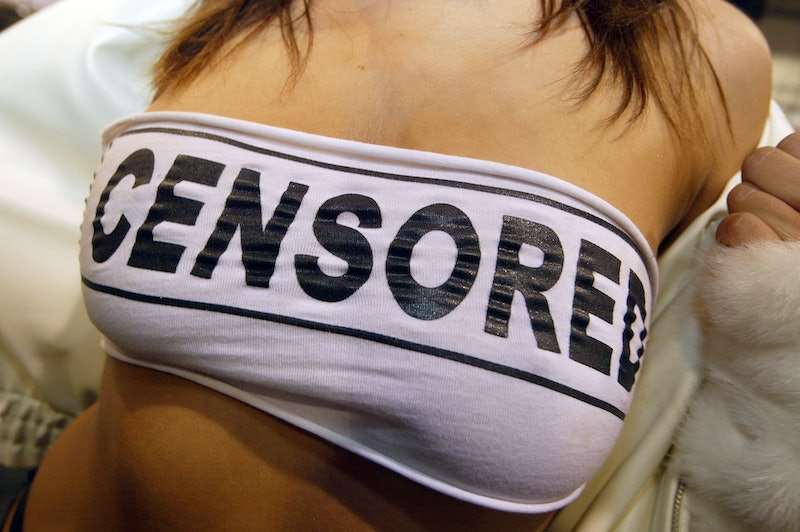 As a result, victims like Hilary are forced to go to extreme lengths to regain control over the images. In the event of a website refusing to remove pictures when asked, it's possible to file for copyright infringement in order to force them to take content down. In order to sue for copyright infringement, however, the images have to be copyrighted in the first place, which is how Hilary found herself talking to government officials about copyrighting her breasts.

According to CNN Money, getting something copyrighted isn't all that difficult. It can get incredibly awkward, however, because the Copyright Office requires applicants to provide a copy of the material they want copyrighted. "I thought, well no, this must be wrong ... they're forcing me to disclose them further when that's what I was trying to prevent," Hilary told CNN Money.

Although only the person reviewing the application would see the file, it was too awkward for Hilary to copyright everything her ex posted. She tried to provide stills from the videos instead of the entire footage, but the Copyright Office denied her application. In the end, she decided not to copyright the videos. She did copyright more than 100 images of herself, however, which required three different registrations.

Incredibly enough, Hilary could actually be considered fortunate. According to her lawyer, Elisa D'Amico, taking the photos herself gave her “more rights in terms of being able to pull down that information from online." If someone else had taken the photos, her case would have been "a little bit more tricky."

As usual, the brunt of the blame for revenge porn goes to the victims. Remember when all those celebrities' nude photos were leaked online last year? Do you also remember how most of the Internet responded? "If you don't want photos like that online, don't take them in the first place" is a frequent refrain when debating how to put a stop to the phenomenon. It's the same reasoning that causes police to teach rape safety to girls but teach boys nothing about consent, or interrupting girls' education to enforce dress codes instead of putting a stop to the sexualization of teenagers. (Come on, people. Shoulders aren't going to distract boys from learning.)

On the bright side, students protesting dress codes have been all over the news lately, and campaigns educating the public about consent have become more popular in recent years. Let's hope the trend continues.

More like this
Is TikTok’s “Villain Era” Trend Just An Excuse For Bad Behaviour?
By Chanté Joseph
How To Support Gun Control Reform Right Now
By Morgan Brinlee and Carolyn Steber
9 Signs You Might Be In A One-Sided Relationship
By Lea Rose Emery and Mackenzie Sylvester
How To Spot The Signs You’re Being Love Bombed
By Lea Rose Emery and Mackenzie Sylvester
Get Even More From Bustle — Sign Up For The Newsletter