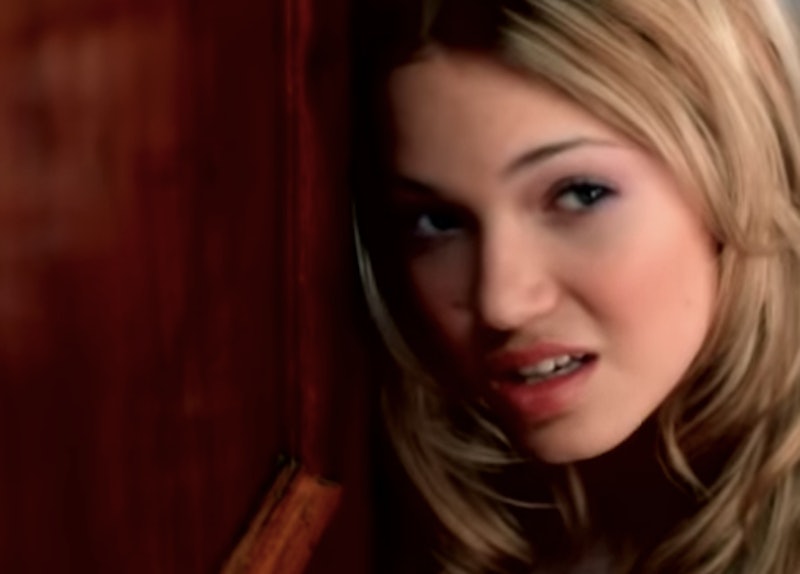 Mandy Moore is my unsung hero of the 2000s pop queens. There were, of course, Britney and Christina and even Jessica, but my heart belonged only to Mandy. I used to rush home after school to catch Total Request Live and hope that my teen idol cracked the top town. Real talk: I’ve spent hours and hours alone in my room with her albums. Even today. Can’t judge me.

The makeup of the late 1990s was light, and by light, I mean absolutely frosted. Icy hues dominated lids all over the country, and Moore’s frosted pink eye shadow perfectly captures this (thankfully forgotten) trend.

Full disclosure: I literally saw this movie for the first time three weeks ago. My roommates found out that I hadn’t seen in and reenacted the scene in A Clockwork Orange to make me watch it. Truthfully, I enjoyed it, but it really hadn’t occurred to me to even watch it.

I saw this video and begged my mother to take me to the dance store to get me one of those wrap half-sweater things. Was I a ballerina? No. Can I tap my toe in rhythm? Barely. But it was 1999, I dressed like it, and that’s what mattered.

Showing Clips Of A Movie In A Video

I mean, I know people don’t even watch videos anymore, but what artist still puts clips of a soundtrack song in their music video? I cannot think of one, at least not in the past ten years. This snippet is definitely a relic of the past.

This is partly a joke, partly the truth. Mandy Moore does not really sing all that much music anymore. She does voiceovers, she acts, she does Muay Thai or something and hangs out with Minka Kelly (I follow her on Instagram), but there’s not much music to be found in 2015. Let’s change this soon, please!

Singing Against A Plank Of Wood Looking Up At A Camera

I’m having specific flashbacks to Britney’s “From The Bottom Of My Broken Heart” video with this shot of Moore. Who did it better? Mandy Moore, obviously, because she wasn’t wearing an ugly bucket hat as she sang.

The look of the siren pop princess, a la Christina in “I Turn To You,” Jessica in “I Think I’m In Love,” Britney in “Stronger”, and even Willa in “I Wanna Be Bad.” No bangs, bleach blonde, and flat-ironed within an inch of its life: That was the 1999 way. Today’s hair embraces a little bit of bedhead and plenty of bounce.

Whispering In A Song

Moore whispers, “I wanna be with you” at the end of the song — a benchmark of late 1990s/early 2000s ballads. Britney did it, Christina did it, Jessica did it. Even Taylor Swift does it sometimes today: Do you think she’s pulling a #TBT to her favorite pop princesses?

All joking about how bad the video is aside, when is Mandy Moore going to get back into music? She’s going through a divorce, and her breakup albums are the best (Wild Hope is amazing). Mandy, your fans want to know!