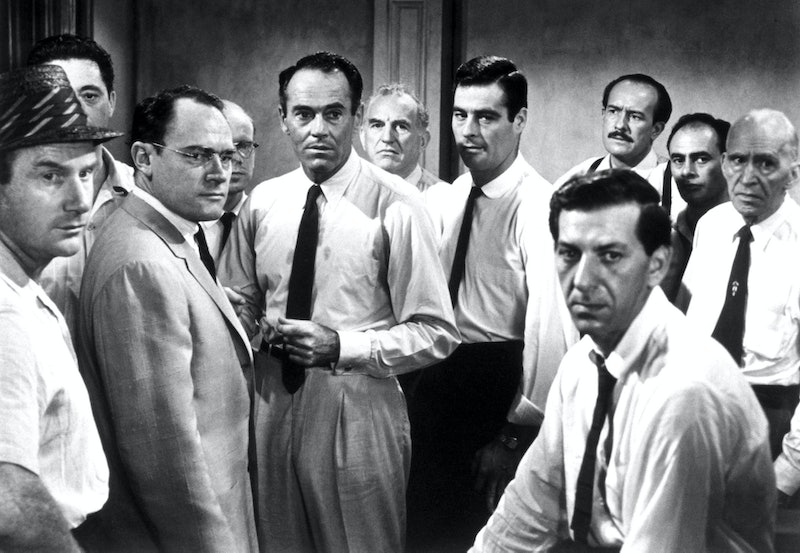 I'm pretty sure Amy Schumer wants me to love her forever. Her third Season 3 episode of Inside Amy Schumer is a parody of 12 Angry Men, the classic film many of us suffered through in high school, and she barely appeared in the episode. Whether or not you're entirely familiar with her movie inspiration, the "joke" of 12 men on a jury working to decide whether or not Schumer is attractive enough for television still lands. How could it not? But when you go back to what happens in the original 12 Angry Men , you realize just how clever and brilliant Schumer really is. (As if more evidence was needed to prove that point.)

As with any good parody, Schumer and crew paid serious attention to detail: 12 Angry Men was released in 1957 and directed by Sydney Lumet while Henry Fonda plays the hero of the film — Juror #8 — the lone juror who couldn't say without a reasonable doubt that the 18-year-old boy on trial for stabbing his father to death was guilty. With his soft-spoken words and logic, he is able to convince the other 11 jurors that there is a reasonable doubt and they also decide the young man is not guilty — after going over the evidence and voting and revoting. It's the justice system at its finest, really.

In both versions, tensions build and the jurors get in heated arguments while the accused are on trial for their lives. The young man's life is in jeopardy in 12 Angry Men because he will receive the death penalty if he is found guilty. And in "12 Angry Men Inside Amy Schumer" (yep, that's the name of the episode) Schumer's life is on the line (maybe? Jeff Goldblum can't remember) because as her version of Juror #8 (portrayed by John Hawkes) says, they're judging "her appearance, so her life."

Both the film and the sketch have a list of phenomenal actors. Besides Fonda, 12 Angry Men has Martin Balsam, Jack Klugman, Jack Warden, and Lee J. Cobb. (If their names aren't recognizable, Google 'em. It'll do you some good.) Schumer's version, however, has Hawkes along with Jeff Goldblum, Paul Giamatti (who played God in Inside Amy Season 2), Vincent Kartheiser, and Dennis Quaid (who was in Schumer's sketch "Plain Jane" in Episode 2 of this season). From taking the customary preliminary vote, to the trial taking place on the hottest day of the year, "12 Angry Men Inside Amy Schumer" makes sure to follow exact details from the original film. And though Schumer isn't on trial for something quite as serious as murder, her point comes across just as solidly as screenwriter Reginald Rose's did back in 1957.

And in case you still don't believe me, here are nine times when Inside Amy Schumer absolutely nailed its 12 Angry Men spoof.

The Commitment To Black & White

The entire sketch was in black and white, just like the original film and keeping the sketch that way (a choice that could shock most modern TV viewers) set the tone perfectly for the sketch. (As did the matching shot —seen above — of the accused.) Plus, fun fact: 12 Angry Men was originally a teleplay and a live performance of the play aired on TV before the film was made. So, Schumer brought the play back to its rightful home: television.

How long do you think it took someone to find that matching font in Schumer's camp? No wonder Schumer said of her mini-film (which she also co-directed), "I'm more proud of [this episode] than I think anything I've ever done in my life."

One of the last people to be convinced of the accused people's innocence is the annoying, hatted man who has somewhere else to be. In the film, he's got tickets for a baseball game, but in Inside Amy Schumer, he's got tickets for an Adam Levine-Blake Shelton concert, called the "Garbage Dick Tour." (I honestly could not think of better words to describe my feelings toward Adam Levine.) Henry Zebrowski (of the canceled A to Z) owns the obnoxiousness that Warden originated.

Juror #10 in both versions is super disgruntled with Juror #8 and when #8 originally votes not guilty/hot enough for TV, #10 exclaims, "Boy, oh, boy. There's always one." In Schumer's version, Giamatti takes on Ed Begley's grumpy Juror #10, and while Begley's version of Juror #10 is racist (the accused boy is Puerto Rican), Giamatti's rendition is misogynist. Naturally, both men go on rants for their evil causes. Giamatti's version? "Well, no women are funny. But, ya know, if you have to hear them blab, they better at least be hot." Damn you, Juror #10!

Evidence Is Brought Into Question

Juror #9, the old man who sits next to Juror #8, is the first to agree with the compassionate #8. Although Inside Amy Schumer matches this detail from the film, Joseph Sweeney from the movie is much more adorable than George Riddle from the show who talks about how Schumer would be grateful to have sex with him. Excuse me while I throw up in my mouth a little bit.

There's One "Token" Immigrant On The Jury

All of the angry men in 12 Angry Men are white men discussing the life of an 18-year-old Puerto Rican man. The only diversity in the room is Juror #11 (portrayed by Czech actor George Voskovec in 12 Angry Men), whose first language is not English as he's an immigrant to the U.S. In Amy Schumer's version, Juror #11 is portrayed by Pakistani comic Kumail Nanjiani. (Schumer also added diversity to her cast with Adrian Martinez, who is of Dominican-Nicaraguan descent.)

They Use Diagrams To Prove The Point

Fonda measures out the juror room in feet and gets a map of the apartment building where the murder took place to prove that the testimony of the old man who said that he saw the boy run out the apartment doesn't hold water. Hawkes measures out the approximate distance from Juror #4's bed (Mad Men's Kartheiser) to his TV and has a photo of Schumer to see if #4 would get a reasonable "chub" looking at Schumer without his glasses on. The verdict? Chub activated! (In the film, Juror #4 also changed his verdict when they used glasses to prove a point.)

Juror #3 Is The Last To Be Convinced

After Jurors #4 and #10 finally agree with the rest of the group, there's only one man standing: Juror #3. In both versions, Juror #3 loses his goddamn mind and eventually breaks down, showing that the reason he thinks the accused is guilty/not hot is because of a personal issue. A photo of his loved one triggers him to cry, and eventually concede to let the accused live. Long live the innocent and the reasonably attractive!