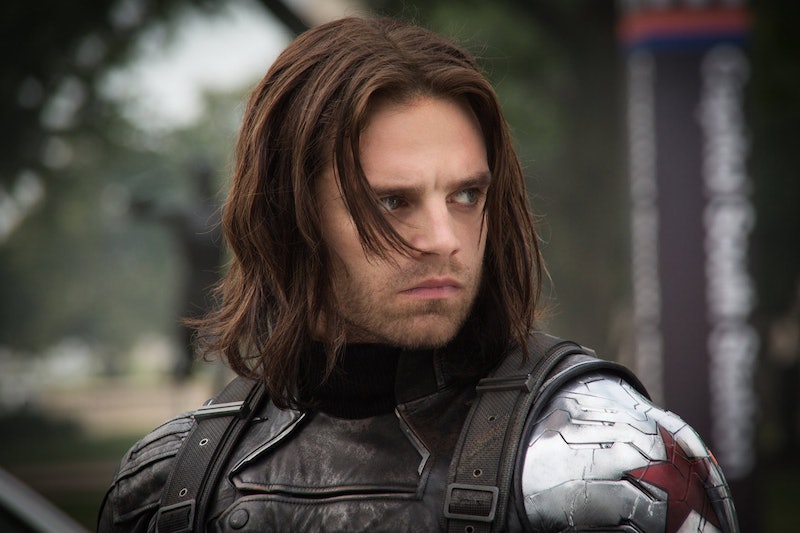 For a film nominally titled Captain America, the upcoming Civil War is sounding more and more like Avengers 2.5 . The third Cap movie, due out in May of next year, stars pretty much everyone from the Marvel Cinematic Universe. Are you ready for this epic cast list? Chris Evans, Robert Downey, Jr., Scarlett Johansson, Jeremy Renner, Paul Bettany, Chadwick Boseman, Daniel Brühl, Don Cheadle, Martin Freeman, Frank Grillo, William Hurt, Anthony Mackie, Elizabeth Olsen, Paul Rudd, and Emily VanCamp are all set to star in a movie that is, if possible, even more jam-packed with action heroes than this summer's Age Of Ultron. But what about the titular character of the last Captain America movie? Will the Winter Soldier appear in Civil War ?

At the end of the terrific 2014 sequel, Hydra had successfully overthrown S.H.I.E.L.D., although Steve Rogers had foiled the Nazi organization's plan to take over the world with a fleet of Helicarriers. During the final battle, the Winter Soldier (Hydra's ultimate weapon, who was actually Rogers' resurrected friend Bucky Barnes) fell from a Helicarrier into the river below and then vanished. Audiences glimpsed the character again during Winter Soldier 's post-credits scene, as a brainwashed Bucky attended the Smithsonian's Captain America exhibit, seemingly trying to recover his lost memories.

A quick reference was made to the Winter Soldier's disappearance in Ultron, when Sam Wilson (aka Falcon) mentioned to Cap a "missing persons case" he was working on. Obviously, Rogers has continued his quest to find his missing bestie off-screen in the interim between Winter Soldier and Ultron — a search that will apparently come to fruition soon, since Bucky's portrayer Sebastian Stan has been officially added to the Civil War cast list.

This is a relief since, even though directors Joe & Anthony Russo had confirmed that the Winter Soldier would be crucial to the plot of Civil War , they came short of confirming his actual physical appearance. "Is the Winter Soldier the world’s most dangerous assassin that’s ever lived or the world’s longest serving P.O.W.?" they asked. "Is he responsible for his actions since he was turned into the Winter Soldier, or is he innocent by reason of insanity?"

It sounds like the question of Bucky's heroism or villainy will be central to the conflict between Captain America and the government (with Iron Man on their side). But this is a debate that could have been carried out while the Winter Soldier himself was still missing and Rogers was concerned about what would happen to his former friend when the government did finally catch up to him. So, it's good to know that Bucky won't only be talked about, but will actually be present... if only so we might get more scenes of Sebastian Stan like this:

So what will the Winter Soldier be up to in Civil War, other than instigating a conflict between Captain America and Iron Man? Will he have anything to do with the "international incident" that kickstarts the film, mentioned in the recently released synopsis?

Steve Rogers leads the new team of Avengers in their continued efforts to safeguard humanity. After another international incident involving the Avengers results in collateral damage, political pressure mounts to install a system of accountability and a governing body to determine when to enlist the services of the team. The new status quo fractures the Avengers while they try to protect the world from a new and nefarious villain.

Even if Bucky doesn't find himself involved in the conflict so early in the film, there is at least one major event he'll almost certainly undertake that could change the Marvel Cinematic Universe down to its very foundation: becoming Captain America.

In the comics, the Civil War storyline culminates when Steve Rogers is shot and killed by the villainous Crossbones (Grillo) and a brainwashed Sharon Carter (VanCamp). A fully recovered Bucky than takes up the mantle of his fallen friend and becomes the newest iteration of the star-spangled hero.

There's strong indication that this is the direction the MCU is headed: while Chris Evans is nearing the end of his contract with Marvel and has already announced his intention not to renew it, Stan still has a whopping eight films left in his contract. It sure seems like Marvel has been long-term planning this shocking turn of events since well before the release of Winter Soldier.

A heart-rending climax to Civil War where Bucky finally regains his memories and gets his old friend Steve back, only to see his friend gunned down mere moments later, and then honors his friend's memory by taking his place in the Avengers? Sounds like the kind of juicy drama the MCU needs to recover from its reputation as a franchise that will never kill anyone ever. Count me in!