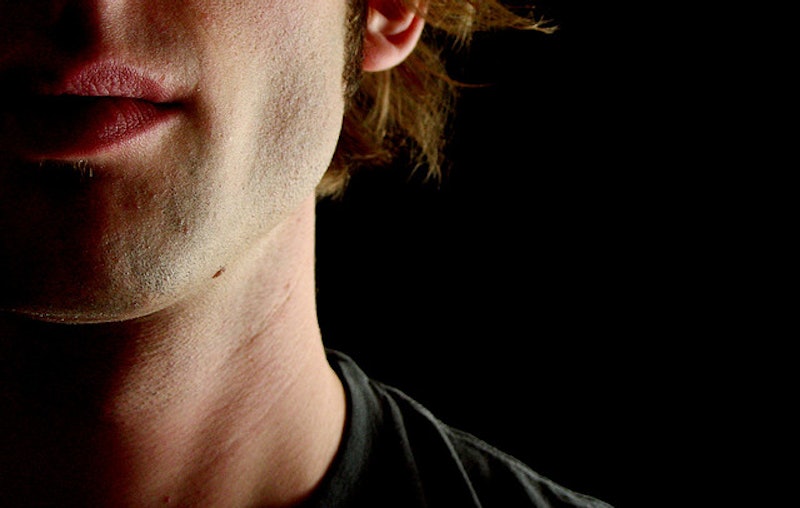 I've dated both bearded and non-bearded men, and while I'll be the first to admit that I have love for some scruff, I think the clean-shaven men out there don't get enough appreciation. Beards have been getting a lot of attention lately, and it's easy to see why. A solid bit of facial hair can completely transform a guy's entire appearance, making him look older and more "manly" according to some. But what about the guys who won't (or can't) grow a bountiful chin garden? Where's the love for them? Here, that's where.

Sure, the idea of a man who hasn't had time to shave because he's been busy chopping down trees is kind of hot, but so is the classic image of a gentleman with a well-tailored suit and freshly razored cheeks. And the beardless ones are much more fun to have in bed.

Call me behind the times, but given the choice between a man who shaved this morning and a man who only trims his beard once it starts tickling his nipples, I'll choose the former every time. Even guys with shorter beards don't compare to clean-shaven men once clothes start coming off. If you're unconvinced, I don't blame you; beards have been celebrated so much recently that it seems impossible to believe you could ever choose hairless over hairy. But trust me: once you go beardless, you never go back.

1. Your bikini area will remain flawless

You know what I love more than shaving my pubes to perfection, only to have some guy make my lady bits all red and painful by going down on me with his beard? Basically everything. When a baby-faced babe decides he wants to give oral, you can rest assured that you'll be able to focus on how good it feels instead of wondering if crotch exfoliation is a necessary part of your beauty regimen.

Picture this: your man is on top of you, his glorious lumberjack beard swaying to-and-fro with each thrust. Just as it starts to feel really — and I mean really — good, a single coarse hair falls from his chin and into your open mouth. Your "oohs" and "wows" are turned into "pleh, pleh, hold ons" as you try to get that annoying face pube out of your mouth. You could choose to ignore it, I suppose, but good luck having an orgasm when you can feel a hair on your tongue. If you'd chosen a beardless beau instead, you'd already be well on your way to having your big moment, no hairs attached.

3. They make up for their lack of facial hair with cold, hard cash

Now I ain't sayin' she's a gold digger, but if she is, she'd better stay away from bearded dudes. A whopping 98 percent of men on the Forbes 100 list of the world's richest men have not a single hair on their chinny-chin-chins. And let's face it, a man who can buy his own shaving cream and five-bladed razors is a definite turn-on.

4. A hairless face feels so nice

I'll love the "haven't shaved in three days" look as much as anyone, but feeling a silky face kissing your body is beyond compare. When you're in the moment, feeling soft skin instead of a scratchy hair bush keeps sex as smooth as your partner's gloriously touchable face.

5. Bearded men are in constant danger

Wouldn't it suck to be walking down the street with your boo when suddenly his crazy ex comes up to him, grabs his beard, and uses it to pull his head down while her other hand chops his head off with a machete? According to Alexander the Great, this (the head-chopping part, not the crazy ex part) was a very real threat, so he made all his soldiers shave off their beards before battle. Sure, that was over 2,000 years ago, but if you like to be sure that your bed buddy isn't going to be killed off thanks to a tragic beard-related accident, it's better to be safe than sorry.

6. His face probably isn't the only part of his body that's smooth. *wink*

Even the cleanest of beards have an amazing ability to hold on to sweat and other bodily fluids, so it's no wonder that many hairy faces might be as dirty as a toilet seat. You might not mind tasting yourself when your guy goes down on you and then comes back up to kiss you, but feeling, smelling, and tasting your lady juices when they dampen his beard isn't appealing for anyone I know. God forbid he doesn't wash his beard afterwards and opts to let it marinate in the stuff all night. A clean-shaven man might get sweaty, but everything comes off much easier once the fun is over.

8. Having sex with him will help his beard grow slower

Can a quickie a day really keep a beard away? It would appear so. Men who aren't getting laid have been shown to have faster-growing facial hair, so the next time you see a sexy guy buying Gillettes at the supermarket, feel free to let him know that you have an even better way to keep him looking sharp.

I suppose there are women who enjoy the feeling of man whiskers tickling their neck while they get seduced, but I have no idea how. If sex were a party, facial hair would be that obnoxious person that butts into all your conversations and tries to one-up your story with theirs. When you do it with a beardless guy, you can rest assured that the only ones coming to the party in your pants are all the wonderful fleshy bits.

If you want a guy whose ID says he's 33, but whose face says he's 43, by all means go for that guy at the bar whose beard conceals his entire face. But eventually, he's going to be 43 and looking 53 if he doesn't tame his chin mane. Science says facial hair can make a man look 10 years older. If you're just looking for a one-night stand, it won't really be an issue, but if you want to have sex with the same person over the span of a few years, a clean-shaven man will stay younger-looking for a much longer period of time.

11. They don't look as ferocious

If you enjoy being terrified by your sexual partner, by all means, find a bearded man to do it for you. But if you like to relax while your partner is physically inside your body, just remember that clean-shaven men have been reported as less aggressive-looking than guys with facial hair. Those jaw-jackets might have served our ancestors really well when it came to scaring off other cavemen, but if you want a guy who isn't going to scare you away, pick one that knows how to use a razor.

12. They just look better without clothes

A naked man with the beard shares the same problem as a naked man with socks; there's something disrupting all that nakedness. If you like your men like you like your show poodles, more power to you. But leave all the sexy clean-shaven men for those of us who actually appreciate them.