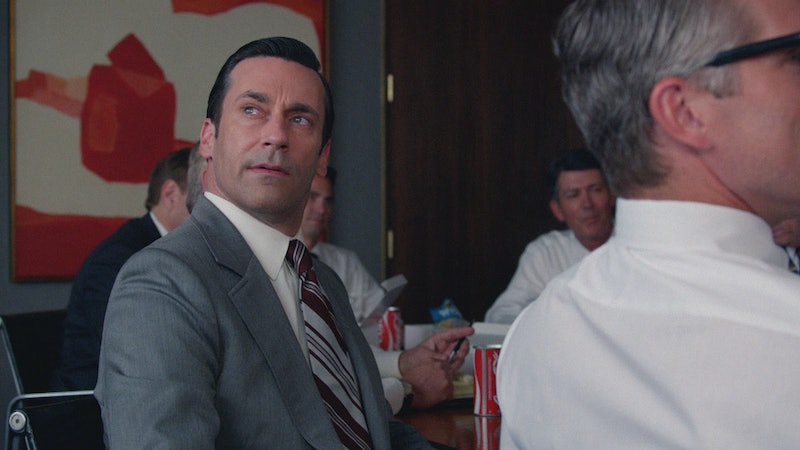 There are a lot of crazy theories about Mad Men and I don't blame fellow fans — the show is not afraid to take a walk on the weird side. However, a recent episode may have given a nod to one of the biggest conspiracy theories in the past couple of years. Was Mad Men trolling D.B. Cooper conspiracists in last Sunday's episode? The image of a plane flying certainly kickstarted this theory amongst fans, but I'm gonna give it a solid maybe.

The theory, which was brought forth by Bustle's own Lindsey Green in 2013, is that Don Draper is the infamous "D.B. Cooper" who hijacked a plane and then disappeared on a parachute with $20,000 in hand. Last Sunday on Mad Men, in a meeting at McCann-Erikson, Don watched an airplane cruising across the Manhattan skyline before making his decision to go off on a solo road trip. Is Don Draper coming back? Was the appearance of Bert Cooper's ghost as Don Draper drove west further proof — is he going to take Cooper's name next? Was this proving the "Don is D.B. Cooper" fan theory, or are the Mad Men writers big old trolls?

I suppose that could be a troll maneuver from Matthew Weiner and company. Entertainment Weekly certainly thinks that the episode contained several nods to conspiracy theorists. At the Matthew Weiner's Mad Men exhibit in New York, one of the fake Mad Men spoilers planted on a photo of the writer's room was the work "hijack" — so they're definitely trolling, right?

Here's the thing. This show has been obsessed with airplanes from the beginning. That's part of the reason this theory exists in the first place. So this isn't necessarily a troll move, it's keeping with an established aesthetic choice. We've seen tons of airplane imagery on seven seasons of Mad Men including:

On top of that, the first promotional artwork for the final season showcased the entire cast on period planes and in a period airport. What did it mean? The 1960s were a golden age of travel and it could be nothing more than that.

This isn't the first time that a conspiracy theory has involved real life. Remember the Sharon Tate theory about Megan? However, in an interview on Conan, Matthew Weiner identified the Cooper theory as one of the craziest theories he had ever heard. He and Conan then trolled the audience with a clip from the "finale" of a watermelon in a fedora falling from a skyscraper. Weiner refused to debunk the Cooper theory because he still wants all of us to watch the show.

Is Matthew Weiner acknowledging the theory to throw us off the scent, or is this proof? Was the plane that Don Draper gazed at specifically targeting fans of this theory, part of a larger air travel theme on Mad Men, or yet another clue to Don's end game? I feel like Wallace Shawn's character in Princess Bride trying to figure out which cup is poisoned. Unfortunately, I have not built up an immunity to iocane powder, so I'm at a loss.