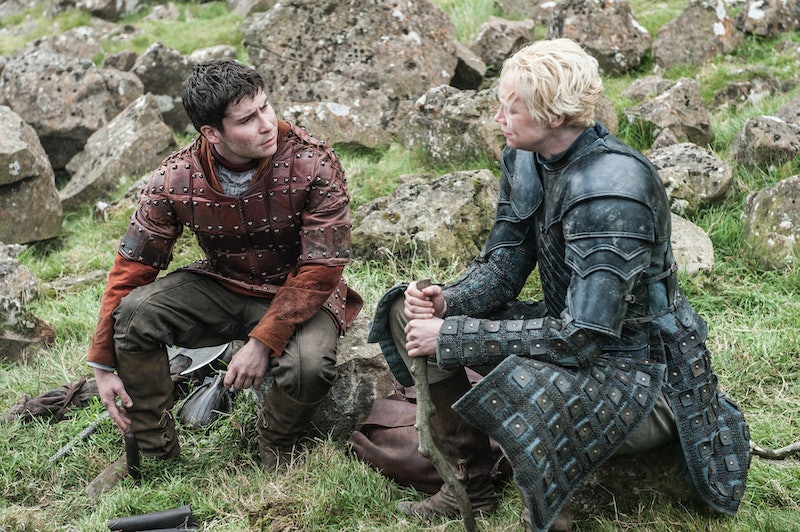 Finding a Stark girl is no easy task — a fact that Brienne of Tarth is learning the hard way. She promised Catelyn Stark she'd exchange Jaime Lannister for Sansa and Arya... and well, we know that didn't go according to plan at all. Now she's once again on a quest to retrieve just one Stark girl, Sansa, who fled after the death of Joffrey at the Purple Wedding. All Brienne's trying to do is find her and keep her safe, and that is proving much harder than it looks. Is Brienne ever going to team with Sansa, or is this whole quest across Westeros for nothing?

Technically, Brienne already found Sansa. But the common theme here is that things aren't going so well for her quest. She came upon Sansa and Littlefinger, and was able to identify the two of them. Brienne explained that she was there, on a long, ongoing quest from Catelyn, and was only trying to get Sansa to safety. But, the two were then separated again in a scuffle, and Littlefinger took Sansa away, leaving Brienne and her assigned squire, Podrick, to follow behind them at a distance. Brienne sees them approach Moat Cailin, and now all I can think is "Please, oh please, let Brienne get to Sansa before Ramsay and Roose Bolton do anything crazy."

Here's that obligatory spoiler warning for those who don't actually want to know what's coming next. Do Brienne and Sansa ever meet up? Is Brienne able to get her to safety? Is it a great idea or a great idea if the two team up for a buddy road trip story, and would we all watch that HBO special?

Sadly, the answers are no, no, and yes. But that's just in the books. The show, on the other hand, could include something completely different, since the showrunners have started re-writing more than a few storylines. First, Sansa is promised to the Boltons, which doesn't happen in the books. And Sons of the Harpy killed off Ser Barristan and maybe Grey Worm, who are still totally alive in the books. They're changing things up, and they might change up Brienne's quest to find Sansa.

But if we're going by the books, Brienne and Sansa don't cross paths. Brienne instead continues to fail at locating the last known Stark woman (don't forget, Arya's out of sight and out of mind at this point for most Westeros powers that be). There's someone else involved in this, and it's someone who's been involved in this search the whole time (kinda). It's Catelyn. In the books, she comes back to life as kind of a zombie Stark, and appears as Lady Stoneheart. Lady Stoneheart is sort of PO'ed at Brienne for continuing to fail at the quest to get her daughter(s) to safety and is certain that Brienne doesn't have any intention of finding Sansa, and believes that she is secretly working for the Lannisters.

This could be the path the show is taking, except that it doesn't look like Lady Stoneheart will show up anytime soon. In fact, it's pretty certain that she won't show up at all. And without her, that's a big chunk of Brienne's story now gone — so could hers be the next story re-written for television? It would make for a pretty great road trip, you guys. And I guess Podrick can come along, too.

Just think about how great it would be if Brienne were to save Sansa from the perils of the Boltons at Winterfell. No, it might not follow what's happening in the books, but Sansa's story isn't following the books at all. She's got to get out of there somehow, and it might as well be with Brienne's help.

Considering that Sansa has finally just come around to dealing with Littlefinger, think about how impossible it will be for her and Brienne to get along. I've always thought of Sansa as the high maintenance Stark girl, but she's mellowed out a lot over the past few seasons. She's still not mellow enough for Brienne, though. Considering that Brienne's finally just come around to talking to Podrick like a human being, she and Sansa probably won't hit it off right away. But that's certainly a clear cut situation for comedy.

So, in the interest of getting these ladies together on screen, just like, think about it, writers. OK?