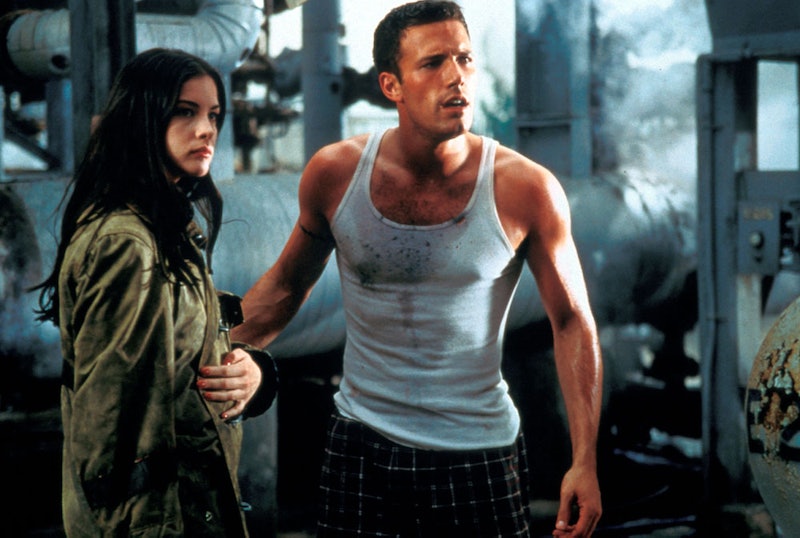 Not trying to brag, but it is almost impossible for me to take more than 15 minutes to get ready to leave the house, no matter where I'm heading. (I promise it isn't impossible. You can get ready quickly, too.) Save, of course, time-consuming emergencies like eyeliner that smeared or spilled coffee or something, this has just been my life. Unfortunately, this also means I have limited patience for tolerating people who take longer than me. I also tend to be of the belief that men who are a little sweaty, and a little smelly are the sexiest men around. I'm not saying these two things are definitely related but, like, they might be. Maybe I like smelly, slightly dirty men because I am impatient and they are less likely to spend forever getting ready. But I also love them for myriad other, more significant reasons.

To be clear, for starters, when I say Dirty, Sweaty, Smelly Men (DSS for convenience from this point forward), I don't necessarily mean to refer to totally ripped firefighters or dudes who hit CrossFit at 5 a.m. every day. I'm more talking about guys who are always running around, being outdoors, building things, or using blow torches for blacksmithing their own knives (or whatever). Whatever type of DSS dude you find most spectacularly sexy, I'm sure all these points will ring equally true. Here's why the absolute sexiest men are of the dirty, sweaty, smelly variety:

They're good to go

Like I said, preparing for an evening out with a DSS boo takes no time at all. He won't keep you waiting while he deep conditions and moisturizes and, like, shaves his entire body or whatever it is "hygienic" guys do before deeming themselves worthy of public display. Hey, he might even be so ready to go before leaving the house he could grab you a much-needed shower beer. (Or join you in the shower with a brew for each of you. You can't see my face right now but I am winking.)

They don't take themselves too seriously

When a dude doesn't need to have pristine, creased slacks to enter the room with swagger, that's hot. It also proves they're not gonna kill themselves to win someone's approval.

They leave a smaller carbon footprint

Especially considering the horrible, ongoing state of drought in California, a dude's lack of obsessive cleanliness possibly also shows awareness for something other than himself. Does anyone need to take a 20 minute shower? Probably not, and this guy knows that.

It's a primal thing

Dudes who douse themselves in cologne after scrubbing off a few layers of skin with microbeads (in states where those are not illegal) are essentially erasing their own pheromones. Human pheromones are super individualized and play a major role in attraction. DSS men let nature do all the work. And honestly, you know the concept of wanting to fuck someone like an animal? This is usually why that happens.

Assuming these DSS men aren't sweating profusely at their accounting gig or are just extremely nervous people, their DSSness shows that they're working hard at... something. It's hard to get a tiny bit awesomely stinky if you're being lazy and doing nothing. If someone strives seriously at their job, chances are they also strive seriously in their relationships.

Smelly guys are more likely to be skilled

I am obsessed with looking at and touching men's hands. The various callouses (or lack thereof) are very telling. Left fingertips lined with hardened skin? They probably play guitar. What about a small mountain range of the things in their upper palm? They likely use hand tools often. Even if they're not great at whatever it is they do, this shows they give a damn to keep up practice.

They don't expect you to constantly be perfectly put together

Since it's obviously not a personal priority, how could they ever hold you to such impossible standards? As such, you won't feel weird and judged if you rock an avocado stain on your blouse for a few late afternoon hours following a happy hour blunder. DSS dudes don't care. Hell, they probably won't even notice.

They're up for the adventure

Think of the grime as evidence of a life lived.

They don't mind getting dirty...er

Once I was dating a dude and he didn't want to go night swimming because — I kid you not — "the ocean is really dirty." OK, probably, yeah, but SERIOUSLY? A DSS man would never pass an opportunity to hang with your goddess self in the moonlit surf because of a little fish poop or what-have-you.

It can make you feel more feminine

I don't want to bring up the callouses again, but... I'm gonna bring up the callouses again. Their rough skin against yours might make you wanna blush. Sure, being super ~feminine~ isn't all women's cup of tea, but sometimes getting girly can be a lot of fun. And it's honestly not even about being "girly" — if a guy is a little rough around the edges, and you are a bit softer, the contrast will feel nice because contrast in general feels nice. With DSS dudes, the juxtaposition is easy and amps up any previously-existing feelings of femininity.

Again, smelly dudes are game to do almost anything. And if y'all are at a BBQ and there's only one spare chair, he has no hesitation giving it to you and taking a squat on a tree trunk instead. They're coolin'.

They won't judge if you want to skip a shower

They might even have good recommendations for dry shampoo.

And it isn't in the form of a suffocation cloud of body spray.

They clean up... just, ugh, so nicely

Not that you'd ever much ask them to change how they look or smell, but should the opportunity arise, it's like seeing a hot alter ego. But luckily, those cleaned up transformations are usually temporary, and your smokin' DSS dude will return to his crunchy ways in just a few hours.