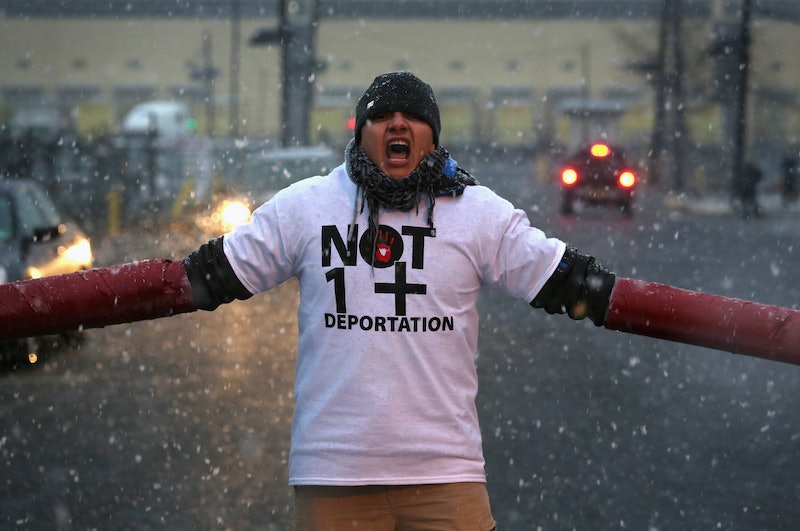 Ever since the U.N. General Assembly adopted the Universal Declaration of Human Rights in 1948, countries the world over have celebrated Human Rights Day every Dec. 10. While Human Rights Day is certainly an international occurrence, it's easy for Americans to immediately associate the phrase "human rights issues" with sweatshops in China, political prisoners in Cuba, or Somali women being jailed for reporting rape. But let's remember: the U.S. has its own problems to deal with. And we have our fair share of what are human rights violations, too.

Read on to find out what the top five human rights causes in the U.S. are right now:

National immigration laws have been in shambles for a while, and Congress hasn't done much to help them. Families across the U.S. are being broken apart thanks to the Immigration and Customs Enforcement agency.

Arizona, unfortunately, has not followed suit. We're not surprised.

Still, now that the White House has implemented a new policy granting legal status to spouses of military personnel, perhaps the tides are changing.

Still wondering if immigration is a human rights issue? Just look at this picture of Renata Teodoro holding hands with her mother, Gorete Borges Teodoro, who is on the Mexican side of the border fence. They have been separated ever since Gorete was deported in 2007.

So far, we're 16 states down — 34 more to go! There's no doubt each and every one of these states is going to be a battle.

Note: the subhead here is marriage equality. Not gay rights. While many LGBTQ rights activists are fighting for workplace protections, education, and a bigger focus on trans individuals, marriage equality is still getting most of the attention from activists — and the funding.

It started with McDonald's employees striking. Walmart followed closely after, and even Ashton Kutcher got involved fighting with Walmart's terrible employee compensation over Twitter.

You can go ahead and make the argument that working hard will get you anywhere. But when working hard still means you barely make a living wage and still need to go on food stamps or Medicaid, that's a problem — and a human right issue.

And the fight rages on. While President Barack Obama may have announced that he will raise the minimum wage to $10.10/hour, he's been beating around the bush for years about economic inequality. As always, local government tends to do better than national. Thank you, SeaTac, Washington, for raising the standards to $15/hour.

And God bless Banksy for bringing the truth.

Did you know that every two minutes, an American is sexually assaulted? That two-thirds of the perpetrators know their victims? That 97 percent of rapists don't spend a day in jail? (You can check out more depressing statistics here.)

Sexual assault is perhaps one of the most pressing human rights issues in our nation. It is also one with the most silence and stigma. The day that Steubenville's rape case ended in two young men being sent to jail was momentous — rarely do we ever see a rape trial, especially such a high-profile one, ending in jail time.

These cases happen all the time, in the most alarming ways: a Maryville rape case was only reopened thanks to Anonymous' pressure (and only after after the rape survivor Daisy Coleman underwent cyber-bullying for months and her house suspiciously burned down). The rape charges against FSU quarterback Jameis Winston stayed untouched for 11 months before a media storm forced an investigation.

And let's remember slut-shaming is painfully present wherever you go.

But there's hope — more and more everyday, people are bringing these issues to light. The Huffington Post recently debuted an entire section devoted to sexual assault, and people have applauded the move. Student groups in colleges across the nation have organized campaigns to spread sexual assault awareness, though sexual assault policies at colleges themselves need a serious revamp.

We've all heard of stop-and-frisk — well, most people have, except for those who were duped last week by The Onion's stop-and-kiss spoof video. We've also heard that Macy's and Barney's have been one of the latest accused of frisking up black customers.

But you may not know the alarming statistics behind stop-and-frisk:

i) Nine out of 10 of those stopped weren't arrested or even ticketed — which means only 10 percent of the time was stop-and-frisk successful at catching crime.

ii) Eighty-seven percent of those stopped in 2011 were black and Latino.

iii) In spite of this statistic, whites were more likely to be found with a weapon than blacks or Latinos.

iv) The NYPD has claimed that minorities are "disproportionately involved in crime." However, "violent criminal activity" was a reason for stops only 10.5 percent of the time.

Look at yourself straight in the mirror. Can you say to yourself, "No, this is not racial profiling?"

Thought so. Though the New York court would like to think otherwise.

Besides New York, let's not forget racial profiling happens across the country every day.

So, happy Human Rights Day. But let's not forget the work at home that still needs to be done.