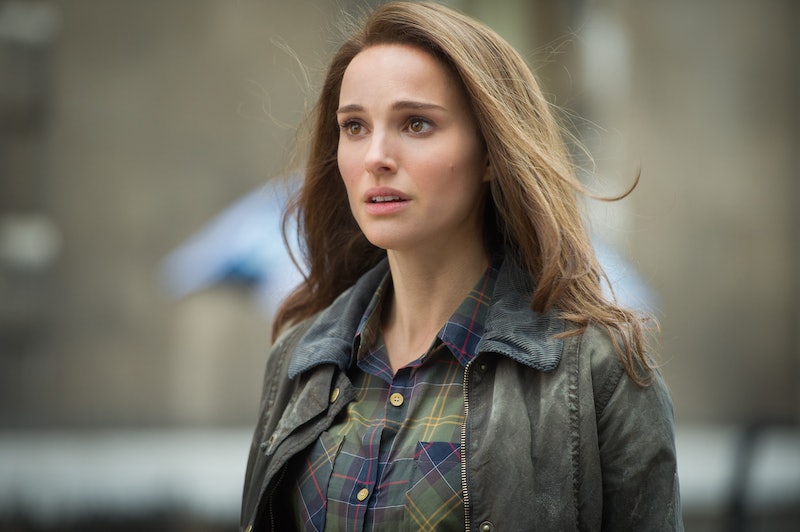 One of the least confusing elements of Avengers: Age of Ultron was Thor's whole, "This is why you silly mortals can't hold my hammer" spiel. Only those worthy of holding it can hold it, and it turns out the big bad instrument of justice isn't just a phallic symbol. News has just been released today from Marvel that the female Thor will be Jane Foster, whose identity as Thor Marvel has previously been keeping under wraps. The character was portrayed by Natalie Portman in Thor and Thor: The Dark World and has been the God of Thunder's closest confidant and friend throughout his Asgardian adventures. In tomorrow's issue of the long-running comic, it is finally discovered that it is Jane who has the power to lift the mighty Mjolnir.

In an interview with Vulture, Thor writer Jason Aaron commented on the comic's reasoning for these turn of events,

It grew out of the idea of the previous Thor becoming unworthy, which was something I was always building toward. I liked the idea of dealing with his worthiness and the idea of what it means for a god to be worthy in the Marvel universe. You know, the god of thunder waking up every morning and looking at the hammer and not knowing if he’s gonna be worthy to lift it. Then, of course, one day he should wake up and not be able to lift it. That opened the door for someone else to pick up the hammer and carry it around in his place. Really, the only character that was discussed was Jane.

Jane's story isn't completely a triumph; in the series, she battles breast cancer. Wielding the hammer will give her superpowers, but it will also weaken her mortal body and wreak havoc on her health. Foster isn't the first Marvel superhero to face such tragic circumstances — Deadpool's body is riddled with cancer, and we all remember how Black Widow called herself a monster in Ultron for not being able to bear children after being sterilized. Marvel, AMIRIGHT?

This development in the comic could also mean changes in the Marvel Cinematic Universe, and here's why Jane Foster taking over as Thor needs to happen in the films.

MCU's Treatment of Women Has Been Pretty Atrocious

After seeing Age of Ultron, it was quite clear that the direction given to the costume department was, "More boob, even on the extras."

Natalie Portman Has No Time for Sexist Nonsense

Natalie Portman is an outspoken feminist and an advocate for changing the way women are portrayed in Hollywood. Having Jane Foster become Thor could help change that persistent tide. She's playing Ruth Bader Ginsburg, for crying out loud.

Scarlett Johansson Can't Do It Alone

So we have Black Widow... and uhh Scarlet Witch (kind of). Come on Marvel, step up your game before DC beats you to it. Also, these two taking down the patriarchy together needs to keep happening.

He's always been the God of Thunder. I, for one, think it's a lot more intriguing to see a character come to terms with the sudden gaining of godlike power while Thor either fights to get it back or accept that he can still be a hero in his new circumstances. Meanwhile, Jane will be the biggest boss in the MCU since Black Widow herself, and I would be here for it.