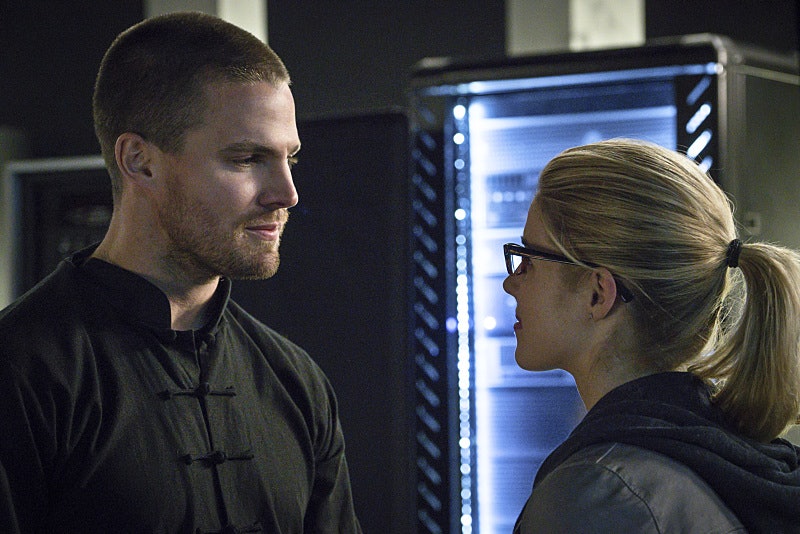 We’re getting down to the wire here, with only one episode to go before Arrow Season 3 comes to an end and things are not looking great for our heroes right about now. The League of Assassins have targeted Starling with their crazy biowarfare, Roy is gone forever, and ohmygosh who cares about any of that because Oliver Queen married Nyssa and things are just the worst. Unless... that is that exactly what The Powers That Be want us to think? Maybe this is just me being a crushing optimist, but I don’t think that they are going to end Arrow on the same grim, sad tone that has been prevalent through this season. I'm betting on just the opposite, actually. I think this season will end with a big old bow wrapped around it — in the form of Oliver and Felicity getting engaged by the end of Season 3.

Am I crazy? (Probably.) I myself have listed some of the many reasons why this won't happen. Oliver is still technically married, and the showrunners may not want to jump the gun on the Olicity relationship so soon. However there have been enough hints and rumors to make a solid case for their impending engagement.

Exhibit A: It's A Trilogy

In an interview with Entertainment Weekly, Executive Producer Marc Guggenheim reiterated his stance that he views the first three seasons of Arrow as a trilogy. In his own words, the last episode will have some finality to them:

The season 3 finale of Arrow is very definitive. It really feels like the end, not just of season 3, but of the first three seasons.

If this episode marks the end not just of a season, but a large part of Oliver’s journey, I don’t see it ending on a sour note. I hardly believe Oliver being married to a woman against her will is the big goodbye that could bookend the series.

Stephen Amell is more then helpful for us conspiracy theorists. He sent this message to Charlotte Ross, who plays Felicity's mom on the show.

Sure, she could just be really happy that Felicity has been made CEO of a major company, but Mama Smoak always seems pretty boy crazy, so I’m going to guess this is romantic. Here is Amell again, repeating the theme of series finale. This does not sound like a man who just filmed a grim ending.

Sounds good to me!

We are going way down the rabbit hole here, but stay with me. According to some fans who claimed to have witnessed this, Stephen Amell and Emily Bett Rickards were spotted filming a scene for Arrow driving a Porsche into the sunset. If that doesn’t say romance I don’t know what does. The pictures are a little grainy and can't be authenticated, so this should be treated like a rumor, but doesn't the two of them driving off into the sunset newly engaged (or even married) seem like the hero ending Oliver Queen deserves?

One way or another, we'll find out the fate of Olicity soon enough. Until then, I am just going to enjoy every moment of this possibility.